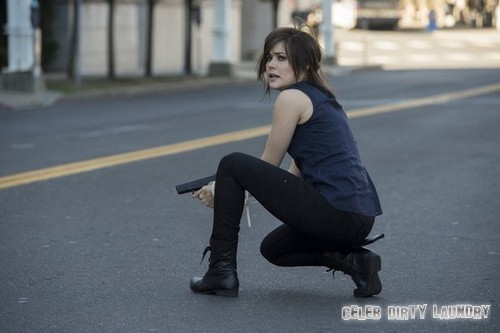 The Blacklist returned tonight after a one week hiatus with the first of a two-part episode.  The second part of the episode airs next week and it’s the Fall Finale.    Tonight’s episode was excellent, James Spader at his best, I cannot wait till next week.  Good news thought, we just happen to have a sneak peek video and some insight for you below on what is going on next week episode called, “Anslo Garrick – Part 2”  below.

On tonight’s show Donald attempted to protect Red from a possible assassination attempt but is misled, it was all a trap. The newest member on the blacklist, Anslo Garrick, infiltrated the FBI black site and tried to capture Red.  Although Agent Ressler (Donald ) was badly injured in the leg Red got them safely in a room that was impenetrable.  Anslo-Garrick tried to get to Red with no luck.  Anslo killed several of Red’s employees.  Meanwhile Liz got caught in an elevator and tried to figure out what was going on.   Donald was bleeding to death and Red saved in.  It was a fast paced episode and if you want to find out we have a full and detailed recap of tonight’s episode, right here for you!

Spoiler alert: If you’re one of those people who doesn’t like spoilers, stop reading now! We have some juicy spoilers for you about the season 1 episode 10 of HBO’s “The Blacklist”

Official NBC synopsis: “Liz (Megan Boone) infiltrates the blacksite and disarms the signal jammers to call in backup but runs into trouble along the way. The fate of Ressler (Diego Klattenhoff) hangs in the balance as Red (James Spader) tries to bargain with Anslo Garrick (Richie Coster). Meanwhile, Tom (Ryan Eggold) becomes increasingly worried about Liz’ situation and the fate of Red is unknown. Harry Lennix and Parminder Nagra also star.”

On next week’s show a new enemy emerges – Anslo Garrick has Liz and Red wants the code to open the door where he and Donald are behind.  Harold does not want Donald to give it up but Red puts a gun to his head and threatens to kill him if he does not get it.  Red is not letting Liz be killed.  Richie Coster guest stars.