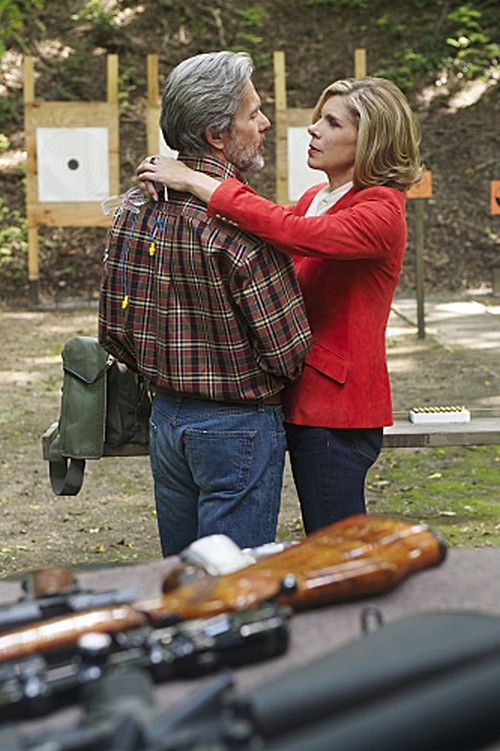 Tonight on CBS THE GOOD WIFE continues with a new episode called, “Outside The Bubble.” On tonight’s show Eli and Jackie disagree over how much influence she should have in Peter’s administration. Did you watch last week’s season 5 episode 3?  If you want to get caught up before tonight’s show, there is a full and detailed recap for your enjoyment here!

On last week’s show Will made Alicia a stunning offer which caused her to reconsider her plans to leave the firm. Also, the partners took action when Diane’s Supreme Court candidacy puts her at odds with her colleagues.

On tonight’s show Alicia attempts to obtain Lockhart/Gardner files as she prepares to leave the firm. Meanwhile, he firm hires Elsbeth Tascioni to represent them in a sexual harassment lawsuit brought on by an employee and Eli and Jackie disagree over how much influence she should have in Peter’s administration.  Emmy Award winner Carrie Preston returns as Elsbeth Tascioni, Gary Cole returns as Kurt McVeigh and Rita Wilson returns as Viola Walsh.

Tonight’s The Good Wife season 5 episode 4 is going to be exciting, and you won’t want to miss. So be sure to tune in for our live coverage of The Good Wife — tonight at 9PM EST! While you wait for our recap, hit the comments and let us know how excited you are about the new season of The Good Wife.  Check out a sneak peek of tonight’s episode below!


RECAP: Chrissy asks Alicia if she has a few minutes, but she doesn’t. Cary tells Alicia that they are having trouble transferring some of the files to take with them. Partners can get around the fire wall, but Alicia wants nothing to do with it. David walks in and Alicia distracts him from what they are really doing.

Will gets told that Chrissy is suing him and the firm for a hostile working environment. Meanwhile, Diane is at a gun shooting range letting out her frustrations.

Eli asks Alicia if she is sure she wants to go, then he tells her about moving the inaugural ball to the governor’s mansion and she says she has nothing to do with that and has a partner’s meeting.

Diane is at lunch when her old friends show up; Diane has a phone call and has to leave. Diane gets a call, Will tells her that Viola is suing them for sexual harassment. Diane returns to lunch, her friends leave. The partners are all together and trying to decide who they want to hire to represent them, they decide on Elsbeth Tascioni who is ready to slime Viola before she slimes them.

Eli bumps into Jackie who took down the state seal and is replacing it with a portrait. ELi talks to Jackie that if she wants to change anything, she needs to ask him first and she better not challenge him. Jackie says she is going to talk to Peter, he says sure, he’ll have Peter call her.

Howard claims that he was taking a nap, he had no intentions towards Chrissy and always takes his pants off when he takes a nap.

A partners meeting is called, it turns out that emails were sent to some of the paralegals, Chrissy being one of them, to go into Howard’s office when he was there having his nap with his pants off.

Diane goes to her office and tries to go into the Sonya Rucker file and finds out that Alicia is in the file. Diane goes to confront Alicia who claims she must have done it by mistake.

Diane tells Kurt that she wants to meet his friends, she finds it strange they talk about marriage and she has never met them.

Elsbeth asks Chrissy if she ever made an accusation against her previous boss. Chrissy says yes, he hit on her. Elsbeth tells the partners that she got rid of most of the charges, but Chrissy is suggesting that Diane prostituted her out, a video is found of Howard and another paralegal with his pants off

Diane asks Eli why Alicia stopped decorating her office a month ago.

Chrissy tells Elsbeth that she liked Diane a lot, but when she told her a client hit on her, Diane said it was a compliment. Diane says the client was gay, so it would be a compliment.

Howard see the video, he says he didn’t do it, but he did and somebody is airing the firms dirty laundry.

Diane gets to meet some of Kurt’s friends, they are all women and in their 20’s. Diane asks if Kurt has slept with any of them, he says no. Diane then asks Kurt why they are getting married.

Jackie bumps into Ronnie, they reminiscence about old times. Cary finds out the person who is sabotaging him is one of his own.

Diane finds out that Alicia is planning on leaving the firm to open her own.

Kurt and Diane are getting married, the two are in civil court.

Elzbeth tells Viola that she has another witness, Kalinda who claims that Chrissy was hitting on her; case closed?

Diane walks into her office and Alicia walks in, she tells her that they are settling with Alicia.

Diane goes to see Will and tells him that Alicia is leaving the firm with Cary and is taking their top clients.