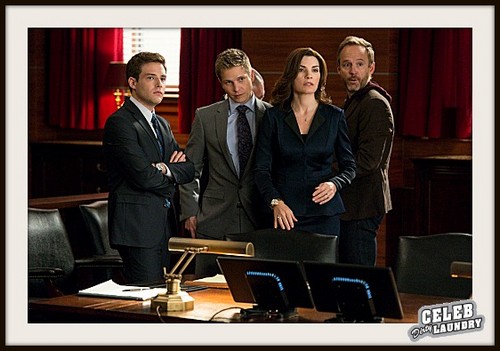 Tonight on CBS THE GOOD WIFE continues with a new episode called, “The Bit Bucket.” On tonight’s show Eli works to secure Diane’s Supreme Court nomination. Did you watch last week’s season 5 premiere?  If you want to get caught up before tonight’s show, there is a full and detailed recap for your enjoyment here!

On last week’s season 5 premiere episode Alicia had to focus on the firm’s efforts to prevent the execution of a convicted murderer while she secretly planned her exit from the firm with Cary. Meanwhile, Eli helped Peter assemble his staff in the governor’s office.   Jeffrey Tambor guest starred as Judge Kluger; Melissa George guest starred as Marilyn, Peter’s ethics counsel; Ben Rappaport guest starred as lawyer Carey Zepps; and renowned defense attorney Barry Scheck guest starred as himself.

On tonight’s show Alicia and Cary sue the NSA on behalf of search engine Chumhum, unaware that Lockhart/Gardner’s connection to a former client has resulted in the spy agency monitoring the firm’s communications. Meanwhile, Alicia’s mom takes steps to support her daughter, and Eli works to secure Diane’s Supreme Court nomination.  Jeffrey Tambor returns as Judge Kluger and Stockard Channing returns as Veronica.

Tonight’s The Good Wife season 5 episode 2 is going to be exciting, and you won’t want to miss. So be sure to tune in for our live coverage of The Good Wife — tonight at 9PM EST! While you wait for our recap, hit the comments and let us know how excited you are about the new season of The Good Wife.  Check out a sneak peek of tonight’s episode below!

RECAP: Alicia gets a call from Will, there is a scheduling problem and he needs her.

Alicia is in the meeting, she gives advice for Chumhum to sue the NSA; he’s ok with it, says to do it. Alica’s mom is having a chat with David about estate planning when Alicia gets a call from Cary who tells her that they are not going to get the space. Cary says they need a hundred forty thousand and Alicia is upset because she already put in ten thousand.

The NSA knows they are going to be sued and so far they are just going to keep an eye on things, which means to continue listening in on their conversations.

Cary knows Kalinda is hiding something, she is reluctant to tell him but says that he has to change his strategy.

Alicia walks into the court house, a guy from Sleuthway is subpoenaed and has to admit his cooperation with the NSA.

Eli is with Deborah when Becca walks in and she has the gavel, she tells him that she found it at a flea market and wants eight hundred and ninety dollars. Eli says that he will not pay for it, Becca calls over a cop and tells him that Eli is trying to steal a prized possession that belonged to her father.

At court, the other attorney files a SCIF and Alicia doesn’t have the security clearance that is required and therefore has to wait in the courtroom. Alicia loses and she is pissed.

Eli is with Diane, he tells her that she has to disavow Peter’s past.

Lisa keeps calling Zack, Grace is looking for clothes for school. Alicia finds out that her mom picked out three dresses for Gace and she is wondering if they are appropriate.

Cary calls Alicia and tells her that her check is amazing, the one for a hundred forty thousand dollars; Alicia didn’t write the cheque, it was written from a trust; her mother wrote the check. Her mother says she can make it up to her by having dinner with her and someone she met, Michael.

Alicia has a chat with Zach, he says he hasn’t seen Becca, then she asks how Becca got a hold of the gavel.

Diane is being interviewed and is asked about Lou Gardner, she takes his side and says that he saved the firm from bankruptcy.

Alicia is back in court, the other attorney tries to pull the SCIF thing on her again but it doesn’t work.

Alicia is at the bar with her mother, her Michael did not show up and is returning to his wife. Alicia asks her mom why she never liked her because she was a likeable kid.

Eli is with Diane and she tells him that she can’t betray Will.

Chumhum tells Alicia and the team that he was trying to help the North Koreans until they backed out because they were afraid of the NSA. David interrupts the meeting, he tells Alicia he needs to speak to her about her mother. David tells Alicia that her mother wrote a cheque for a hundred forty thousand dollars and he has no idea why she would have done that. Alicia then gives her mother a heads up that David is going to ask about the cheque, the NSA is listening in and wonders if this is tied to anything.

In court, Alcia asks the judge to be heard in a SCIF, Mr. Hortense tries to get it shot down but it doesn’t work. Cary and Alicia speak to the judge in private and after receiving his information he tells them he has made his decision.

David is with Alica’s mom and he tries to dig about that cheque that she wrote; she says she invested in property, he offers to back out for her and she says no.

In court, the judge declares that Chumhum wins $14,000 for damaged and he inputs a gag order.

Peter goes to see Virgil and tells him that he is going to have to reconsider because he is making his choice and he is not backing down.