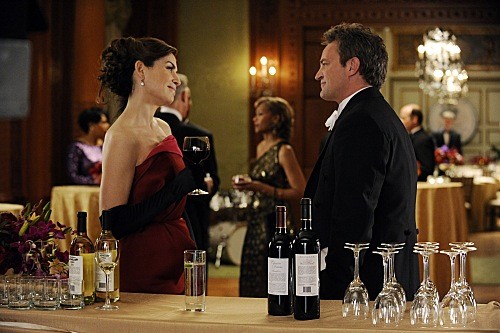 Tonight on CBS THE GOOD WIFE returns with a new episode called, “Death Of A Client.” On tonight’s show Peter and Mike Kresteva vie for an influential endorsement and Diane receives a stunning offer.  Did you watch last week’s show?  There is a full and detailed review for your enjoyment here!

On last week’s sh0w Alicia and Will’s latest case brought them to an inquest at the coroner’s office, where they were hindered by a strict rule that limited their questioning to three per witness. Also, Cary’s father returned to bring new business to the firm and Eli schemes against Jordan.

On tonight’s show when an erratic and litigious client is murdered, Alicia is convinced to waive attorney/client privilege to help the police when she learns that the killer may also be targeting someone close to her. Also, Peter and Mike Kresteva vie for an influential endorsement and Diane receives a stunning offer.  John Noble guest stars as Alicia’s murdered client; Matthew Perry returns as Mike Kresteva; and Stockard Channing returns as Alicia’s mother.

Tonight’s The Good Wife episode 18 is going to be exciting, and you won’t want to miss. So be sure to tune in for our live coverage of The Good Wife — tonight at 9PM EST! While you wait for our recap, hit the comments and let us know how excited you are about this season of The Good Wife.  Check out a sneak peek of tonight’s episode below!

At the Shamrock Dinner, Eli not so soon praises Alicia for standing by her man when by the look on his face he’s shocked to find Will has also decided to attend. The Husband and Lover shake hands but nothing can get rid of the tension.

Nevertheless the night is only getting worse when after a brief discussion/fight with Mike Kresteva, Alicia find her client has just been murdered. He wasn’t her favorite client. He had many disputes and the habit of playing the same classical music over and over again. But he did tell her that she would be the one to identify his body at the morgue. However the killer is still at large and the police believing he’s only beginning.

When questioned by the police about all the cases she handled for him, Alicia is stopped by client attorney privilege. Diane and Will tell her they’ll try to find a living relative to get permission but until then she has to dodge questions from police and her friend turned A.D.A Laura Hellinger. Still when the name Lomax enters the picture, Alicia refuses to mention anything until she’s told by the police that the killer had looked up her address.

Surprised that her mother is at her apartment, Alicia asks her to take the kids back to her hotel while telling the kids to go with grandma so she doesn’t go overboard for St. Patrick’s Day. In order to not her scare them she may have endangered her children by not warning them.

Back at the event Peter and Eli ask Diane to stand as supreme court justice after Peter get elected. Excited at first she doesn’t see the downside until Eli mentions she would have to give up her practice. The same practice that took her several full seasons to get out of bankruptcy.

Later Peter and Eli speak to the influential Cardinal James to only be further shocked when the good cardinal tell them that he understands what they’re going through because he has nephew with a drug problem as well. It doesn’t take long for Eli to track down Kresteva, who simply states he was only telling the truth no matter who may have buried it.

Trying to remember circumstances about the events around Lomax and a certain cop, Alicia recalls how some of her attention was on her affair with Will. Not a good time to recall when Laura just asked her if she should give it a go with Will.

Meanwhile Kalinda is investigating the cop involved when she finds out Edwards Lomax, a drug dealer, was shot and killed a while again. The Client had earlier without names asked Alicia multiply times to look in Lomax’s death, but too busy playing hanky panky wit Will that she wrote off the requests.

When Diane tells Will about her offer, he gives her approval but she feels like it would be heating on him. On the other hand if she does take it she tells Will not to get another name partner but keep it Gardner & Associates. He’s thinking it over when Alicia calls and, true to character and the fact that he obviously still loves her, he tells her he’s coming down to the station.

The minute Peter find out from Eli what Kresteva has been doing, he tells Eli he’s going to the bathroom. Eli knows he’s going do something and tries warn him but no on one puts Peter in a corner. He finds Kresteva in the bathroom and after a very brief tit for tat discussion Peter hits him and stages the scene so that it appears Kresteva was drunk.

All the while, Alicia ‘s mother, Veronica, happens to have her car blocked and instead takes her grandchildren to a bar. Where she tells her grandchildren that not only was their mom pregnant when she got married but that also that the youngest was an accident.

Finally Alicia acknowledges she was selfish by not fully closing the door with Will and tells him that she’s back with Peter. Before things could get even more awkward her daughter Grace calls. Alicia tells her mom to take her kids to the dinner where she’ll meet herr later and no she’s not mad her kids were outside and exposed to a killer. Which is lucky for grandma when Kalinda finds out the police lied about Alicia being in danger.

Kalinda now helping the police in their investigation points them towards someone their client was suing.

At the dinner everyone but Eli thinks that Kresteva had too much to drink including the Good Cardinal when Eli tells Alicia the truth but play along. After a moment of finding and reassuring her daughter that no she wasn’t a mistake nor a band aid for a broken marriage; she talks with to her mother about boundaries.

The cardinal didn’t endorse anyone which is good in Eli speak and after 4 seasons Alicia finally chooses to recommit to Peter. They dance to classical where even though she may not have liked her client, she can now remember him fondly.

But what about Will? Is it really over?