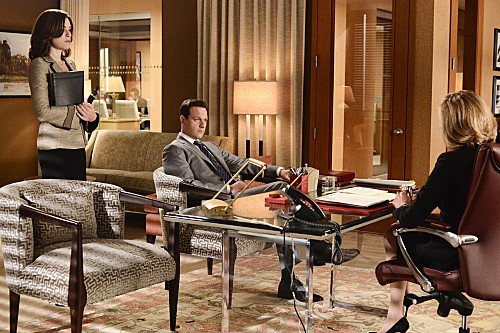 Tonight on CBS THE GOOD WIFE continues with a new episode called, “A Precious Commodity.” On tonight’s show iane’s Supreme Court candidacy puts her at odds with her colleagues. Did you watch last week’s season 5 episode 2?  If you want to get caught up before tonight’s show, there is a full and detailed recap for your enjoyment here!

On tonight’s show Will makes Alicia a stunning offer which causes her to reconsider her plans to leave the firm. Also, the partners take action when Diane’s Supreme Court candidacy puts her at odds with her colleagues.

Tonight’s The Good Wife season 5 episode 3 is going to be exciting, and you won’t want to miss. So be sure to tune in for our live coverage of The Good Wife — tonight at 9PM EST! While you wait for our recap, hit the comments and let us know how excited you are about the new season of The Good Wife.  Check out a sneak peek of tonight’s episode below!

Meanwhile, Diane gets a message from Eli that she didn’t have to the interview, he found another way.

Peter and Alicia do an interview, the interviewer, Ann is asking questions that Peter doesn’t feel comfortable with asking. Alicia gets a phone call and has to leave.

Will gets a phone call, it’s a reporter and wants to speak to him about the money he stole. Will heads to the office, he needs to do something because Diane has hurt him and the firm.

Tara is at the doctor’s office, she is second trimester and the baby has a disease and he suggests terminating the pregnancy.

Alicia meets with the partners from the firm, they are talking about Diane exposing them and they want to take a vote to get rid of her. They take a vote, eight people want her gone, six don’t put their hand up.

Cary wants to know if Diane is being pushed out of the firm, Alicia doesn’t want to respond.

Cathy calls Alicia and wants to know what she said to Tara because she doesn’t want to terminate the pregnancy. Alicia goes to see Tara and discusses the birth defects. Alicia reminds Tara that it is not her baby. Everyone meets together and Alicia tells Cathy that Tara wants to keep the baby. Tara does not think that 15% chance of birth defects are substantial. Cathy begs Tara to do the right thing and tells her that she is hurting them. Cathy’s lawyer tells Alicia that they are suing and she is fired.

Will tells Diane that she is being pushed out and she says that they are going to have to carry her out.

Alicia gets a call for Grace, it is Jimmy Lawrence and she wants to know from Zach who he is. Zach tells her it has nothing to do with Grace, he shows her a website and it has Grace’s picture on it; that is why the guy is calling and he is not the only one.

Alicia is with Tara and tells her that if they sue, she can lose all her inheritance from her mother. David Lee walks into the office and tells Tara that he is in awe of her courage.

In court, Tara’s ObGyn gets questioned about why the amniocentesis was performed so late, she says one was performed already. David and Alicia meets with the partners to talk about the case and everyone starts arguing. They are together to speak about Diane’s exodus package. David doesn’t want to give her a good package and Alicia reminds him that she is going to be a Supreme Court Justice.

Back in court, Alicia asks if the fetus can survive outside the womb, he says no not in this case. The judge says because of the conflicting feelings of the doctors the fetus will remain non viable for another 48 hours.

Diane does not accept the exit package; Eli says it is the same package that was offered to Jonas Stern, but she is not impressed.

Will speaks to Alicia and tells her that most of the partners want her to replace Diane as managing partner.

Cathy is on the witness stand talking about the contract, she admits that her first son was born with a birth defect and that is why she put the clause in the contract. Cathy then says she is pro choice, but wants Tara to have an abortion. Cathy admits it is her body, but she agreed to contract and should be Cathy’s choice, not Tara’s choice.

Alicia is on a break, Cary walks in and wants to know if she is taking the job as managing partner. Cary tells her that staying is a mistake, she will always be under Will. Cary says it was only offered because Will wanted someone he could influence.

In court, the judge says that Tara cannot be forced to abort the child; the other attorney then declares that Tara breached the contract for other reasons and wants that heard.

Alicia gets a knock at the door, it’s a guy who wants to meet with Grace and she tells him off.

Grace confronts Alicia and asks her if she turned Cam away at the door, he is her pastor. Alicia says she saw the website and she thought he was one of the guys who saw it. Alicia then says that Grace is taking clothes from her closet and looking older and maybe that is not a good thing. Grace says that she just wants to look pretty.

Back in court, Tara is on the witness stand and is asked if she offered take $100k to abort the child. It turns out that the doctor made a mistake about the date and the case is closed, Tara will not be forced to abort the baby.

Diane gets her final offer from the partners, she refuses it. Will tells Diane that she is not getting anymore and he tells her that he cannot give her anymore appreciation. Diane tells Will to up the package by 20% and she will leave, he says that he can’t do that.

Alicia goes to see Cary and tells him they need to leave this week.