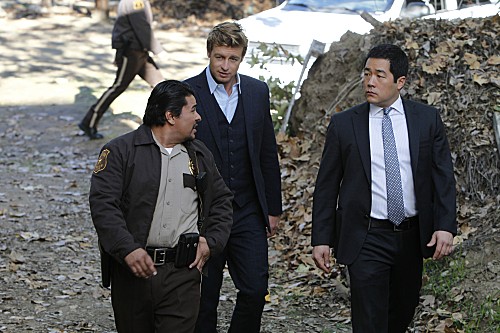 Tonight on CBS THE MENTALIST returns with a whole new episode called “The Red Barn.” On tonight’s show he team investigates a 25-year-old case that seems to involve both Red John and the Visualize group. Did you watch last week’s show? We did and we recapped it here for you!

On last week’s show the CBI investigates the death of a geologist, which Lisbon is convinced is the key to bringing down Tommy Volker and therefore can lead to his downfall.

On tonight’s show A 25 year old case seems to be linked to the Visualize cult and Red John. Lisbon contemplates about her future after arresting Tommy Volker. Jane narrows down his private lists of Red John suspects after speculating that Red John is, or has connections to the Visualize cult.

According to The Mentalist Wiki, “A 25 year old case seems to be linked to the Visualize cult and Red John. Lisbon contemplates about her future after arresting Tommy Volker. Jane narrows down his private lists of Red John suspects after speculating that Red John is, or has connections to the Visualize cult.”

Tonight’s The Mentalist episode 13 is going to be exciting, and you won’t want to miss. So be sure to tune in for our live coverage of The Mentalist — tonight at 10PM EST! While you wait for our recap, hit the comments and let us know how excited you are about the return of The Mentalist?

Tonight’s show starts with an impromptu party being thrown in Lisbon’s honor. Mid celebration, Jane and Kimball are called away to investigate bones found miles away in an old barn. The cop that found the bones believes they are three individual bodies and stray bullets nearby probably fell out of them thanks to 20 years of discomposure. There is also a class ring indicating a teen might have been a victim. Jane takes a walk outside because he’s too upset by the initial findings.

After a little bit of footwork the gang realizes that these murders were likely connected to the Visualize Cult and Red John. They link the ring to a kid named Lester and according to his brother back in the 80’s Lester was involved with this cult and was ordered to cut ties with his biological family.

Lisbon stumbles onto a guy named Miles McCambridge who seems to be a walking encyclopedia of town information. After  talking to him Lisbon meets with Ray for the first time in awhile and he tries to sway her to come and join his new investigative firm. She says she loves where she’s at and it’s not about money, she just really likes her work.

Kimball and a partner go out to the middle of nowhere to talk to Mr. Crayhugh who owns a farm near the old barn. He leads them to the old town vet because the cult used to torture their animals. Lisbon and Jane go to see Dr. Preston but find that she is too ill to talk. Her daughter says that the satanic ritual rumor is false. Father DiBuono is a former cult member that had a bit of info. He claims Lester was drugging cult members to keep them working longer hours and that was odd because the cult frowned on drug use and had strict rules regarding it.

After chasing their tails Lisbon and Jane decide to focus on the local chief of police. He of course plays innocent but then admits to dealing speed to the Visualize cult back in the 80’s.  He didn’t kill them but his hands aren’t totally clean either. Ray also knows more than Lisbon volunteered about the case and she realizes he’s a member of visualize.

Jane decides that all the suspects need to be gathered together so he has everyone meet at the diner. While there the old vent sees the cult symbol and freaks out. Her daughter admits that she’s the killer. Lester had been fighting with her mother at the barn and shot an animal right in front her. He wrestled the mother to the ground and Holly shot Lester because she feared he would kill her mother. The other two bodies were already dead in the basement. The DA decides to go easy on Holly and so Ray shows up in Lisbon’s office pleading for her to push for stronger charges. Visualize directed him too.

Jane feels like he is beginning to put this case together, but you’ll have to tune in next week to learn more!