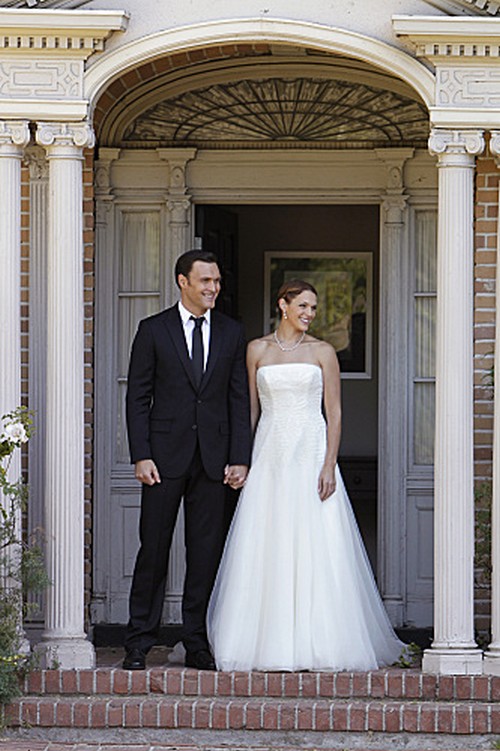 Tonight on CBS THE MENTALIST returns with a whole new episode called “Wedding in Red.” On tonight’s showVan Pelt and Rigsby take a trip down the aisle.  Did you watch last season six’s episode 2? If you want to get caught up before tonight’s new episode, we have a full and detailed recap, right here for you!

On last week’s episode Jane discovered an important clue to Red John’s methods as the team encountered four of the suspects, and the CBI investigated the case of a software engineer killed by a drone strike.

On tonight’s show ne gets the CBI involved in a case in Napa in order to focus on Sheriff McAllister, while Van Pelt and Rigsby take a trip down the aisle.  Van Pelt and Rigsby during the course of their jobs has been on again off again.  They both were unlucky at love.

Tonight’s The Mentalist Season 6 episode 2 is going to be exciting, and you won’t want to miss. So be sure to tune in for our live coverage of The Mentalist — tonight at 10PM EST! While you wait for our recap, hit the comments and let us know how excited you are about this season of The Mentalist.  Check out a sneak peek of tonight’s episode below!

RECAP: Wayne and Grace are together, Grace is playing with a young boy while Wayne wakes up from sleeping. It the cuts to Patrick in the police station, Teresa arrives also and Patrick being the gentleman he is gets Teresa’s jacket and puts it on her. They grieve to the Bella Vista Chapel, the pond nearby had two bodies within it found. Patrick is looking at the ducks and feeding them muffins, Teresa doesn’t understand what he’s doing and talks to the sheriff about the case. Patrick finishes up feeding the ducks muffins, he walks up to the sheriff and talks to him about the body found. Wondering if there’s any noticeable clues, the Sheriff mentions how the guy looks like a depressing kind of guy. Patrick mentions the tread on his shoes, how they’re like a racing car of some sort.

Teresa and Patrick enter the chapel and talk to each other, the sheriff appears from behind them. Patrick notices a hammer and notices that there’s blood on the side where you hit it with, Teresa mentions how sheriff didn’t want to go up the ladder and that the man is scared of heights. When Teresa asks for the sheriff to go up the ladder, but he stalls and Wayne goes and checks the hammer instead was he enters with Grace. Teresa ad Patrick arrive at the wedding party, where a bunch of people are tasting wine of some sort; they talk about how the body they found at the lake was Larry. The people at the wedding part don’t really have much a of a reaction knowing that Larry is dead, now the wedding is ruined. Suzy asks to go see the body of Larry, Teresa tells her no. Teresa asks who was the last person to see Larry before he died, it turns out that they all were the last to see him. Larry left the party to go on an alcohol run, but never came back and no one got worried or thought that anything went wrong with him. Wayne and Grace enter the party room after the wedding, Wayne and Grace here someone looking around they found a young man who was looking around with a syringe on him and laxatives. It seems that the young boy was going to put laxatives in the cake, he hates who his brother is going to marry and the entire family. The young boy never knew that Larry died, he mentions about the grooms best man Angel not liking Larry. Cho asks to see angel’s phone to see if there are any text messages to Larry at all, he finds a text about looking for a job. Teresa is interrogating several people who are going to the wedding about Larry, many of the people don’t say much about Larry. Teresa ends up with a woman who can’t speak English, Patrick wants to start not plying nice anymore. Patrick mentions how the sister of the groom hates the bride because of how controlling she is. It turns out that the entire family are starting to fight, they’re clearly not a happy family at all. The bride decides to cancel the wedding instead, this was all Patrick’s idea and everything is going as planned.

Grace did a follow up on the tip of Larry having a fire arm, Cho and Wayne are on the case. Patrick is feeding the ducks, the sheriff comes up from behind and talks to him. The woman mentions how she did in fact have a drunken kiss with the grooms father behind the chapel, Patrick believes that the body was hidden in the river. Patrick asks where the Belle Vista is (Beautiful View in Italian). Patrick mentions how this is the best place to hide a body, Patrick gives the sheriff a second strike on being afraid of heights. Wayne asks Cho if he looks like the marrying type, turns out that they’ve changed relationship rules at the office. Wayne wants to know what he should do, but Cho doesn’t want it to be his fault in the end. Wayne and Cho meet up with a man who sold Larry the gun, the man opens up his garage to show a private arsenal of old weapons, he shows Wayne and Cho an 1884 Springfield musket. Cho tells the man that Larry was murdered in the lake near the chapel. Wayne unsheaths a sword and plays with it and ends up breaking something. Patrick enters the chapel to find the father of the bride sitting there, Patrick apologizes to the man for making his wife admit to having a drunken kiss. Patrick what the man does for a living and he buys antics and sells them for a higher price. Patrick calls Grace for some help, Patrick wants to lovers to go with the wedding instead. Patrick wants Grace to convince the bride that she should get married, in order for his plan to work. Grace talks to the bride and asks what she wants, the bride wants Roberto, but believes that it’s too complicated at this point. Grace talks about Wayne and wanting to spend the rest of her life with, she let him go because she got engaged to someone else. Now Grace talks about how she’s been closing doors to many people and wonders if there will ever be someone who opens that door for her. Grace gets emotional with the bride, Wayne hears the entire thing in the other room. Patrick enters the station and talks to Teresa about the sheriff, The bride and groom arrive to say that they’re going to get married anyways. Patrick mentions how he’s certified to marrying people.

Patrick calls the sheriff on the phone to meet him at the Belle Vista, turns out that the sheriff was close by and shows up right behind him; they talk about hunting. Patrick is trying to find out if the sheriff is Red John, by talking to him one on one about the case. Teresa is talking to Grace and Wayne, Wayne says that he can handle a distraction if needed easily. The bride and the groom are getting married, Patrick is marrying them at the moment. Patrick looks if there are any objections and no one says anything, he then announces them as husband and wife; giving the okay for Roberto to kiss the bride. Teresa goes up and talks to Wayne about needing a distraction, Wayne takes a sip of alcohol and goes and grabs the mic to create a distraction. Wayne wants to offer one more toast, and to mention how he thanks the bride Stacy and groom Roberto for making him realize to stick with following his dreams. Wayne walks up to Grace while making talk about his love, he gets on one knee and asks Grace to marry him. Grace is in complete awe, Grace agrees to marrying Wayne right then and there. Someone leaves the party right as they finish, Patrick intercepts him easily; it turns out that the man who was behind everything was Charlie. Cho comes out of nowhere with his gun, Charlie tried to steal the bible before, it shows a flashback of Larry and Charlie talking to each other. Charlie was going to steal the bible and cut Larry in for it; Larry decides to leave the party, Larry says that he wouldn’t tell anyone, but Charlie ended up trying to knock him out, but killed him instead. Patrick is taken as a hostage, with a gun; Teresa and Patrick try to reason with Charlie.

Charlie takes Patrick up to the top of the Chapel where the bell is located at, Charlie makes Patrick go out onto the roof of the Chapel and follows behind him. Patrick doesn’t look like he’s happy being on top of the Chapel, the sherif appears on a ladder and shoots Charlie off the roof. Turns out that the sheriff isn’t afraid of heights at all, he saves Patrick. This makes Patrick question his thoughts on the sheriff being Red John. The sheriff didn’t trust Patrick and that’s why he came to the wedding. Teresa mentions that they need to spend more time there, it cuts to Grace opening up the box of her wedding dress. Wayne and Grace are getting married inside of an office, they’re overjoyed with the entire experience. Cho as Wayne’s best man brings the ring to Wayne, Wayne puts ring on Grace’s finger; they seal the deal for their marriage with a kiss. Patrick is watching from the door, he’s happy seeing them happy. After they kiss Patrick walks away. Grace and Wayne step outside to see their ride, it turns out that it’s a cart that’s being pulled by a horses with a just married sign on the back.