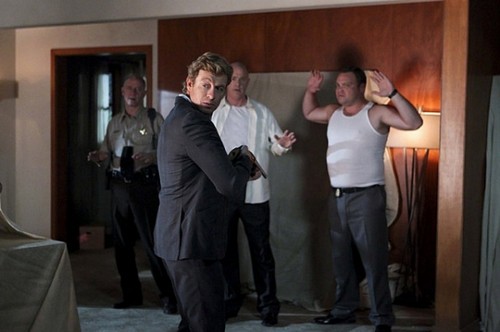 Tonight on CBS THE MENTALIST returns with a whole new episode called “The Great Red Dragon.” On tonight’s show CBI’s main priority becomes the remaining Red John suspects.  Did you watch last season six’s episode 6? If you want to get caught up before tonight’s new episode, we have a full and detailed recap, right here for you!

On last week’s episode it revolved around the cult group Visualize.  We learned much more about Visualize’s deeper connection with Red John, and whether Bret Stiles knew who Red John was, or was he Red John himself.  Jane brought together the remaining Red John suspects after he got a hold of the final clue, and he hoped this gathering will allow him to identify the elusive serial killer.

On tonight’s show Jane finally thinks he knows Red John’s identity.  But the truth may uncover a bigger lie. After gathering the five remaining suspects at Jane’s house he manages to narrow the Red John suspect list further and the CBI’s main priority becomes the remaining suspects.

Tonight’s The Mentalist Season 6 episode 7 is going to be exciting, and you won’t want to miss. So be sure to tune in for our live coverage of The Mentalist — tonight at 10PM EST! While you wait for our recap, hit the comments and let us know how excited you are about this season of The Mentalist.  Check out a sneak peek of tonight’s episode below!