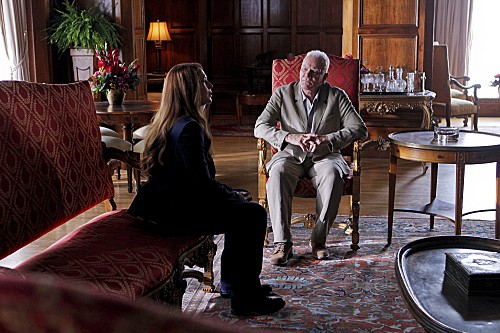 Tonight on CBS THE MENTALIST returns with a whole new episode called “Fire and Brimstone.” On tonight’s show Red John suspects are assembled in one place in hopes of finally revealing his identity.  Did you watch last season six’s episode 5? If you want to get caught up before tonight’s new episode, we have a full and detailed recap, right here for you!

On last week’s episode when a prominent member of Visualize is mysteriously killed, Jane investigated in the hopes that the case will provide a clue that will lead him to Red John.  Reed Diamond returned as Ray Haffner.

On tonight’s show the episode revolves around the cult group Visualize.  We learn much more about Visualize’s deeper connection with Red John, and whether Bret Stiles knows who Red John is, or is Red John himself.  Jane brings together the remaining Red John suspects after he gets a hold of the final clue, and he hopes this gathering will allow him to identify the elusive serial killer.

Tonight’s The Mentalist Season 6 episode 6 is going to be exciting, and you won’t want to miss. So be sure to tune in for our live coverage of The Mentalist — tonight at 10PM EST! While you wait for our recap, hit the comments and let us know how excited you are about this season of The Mentalist.  Check out a sneak peek of tonight’s episode below!

RECAP: RECAP: Patrick is driving in a car on his own, somewhere in Malibu; it looks like he’s visiting his home. Patrick gets out of the car along with a giant rolled up object, he begins walking towards the house and enters the front door. When he enters the house you can see that many things are covered in sheets, turns out the thing in the rolled up object was a shot gun. Teresa calls Patrick and tells him that he can’t do it alone without her; that if he continues with doing what he’s got planned he will end up dying. Patrick hides a pistol in a case under the bed’s pillow, along with the shot gun behind the bed. A man comes to the door and opens whistling, Patrick is waiting for the man to enter.

Now we go to two days earlier before Patrick going into his house and waiting for Red John to meet up with him, Patrick is now speaking to Wayne, Grace and Teresa about the tattoo that’s on his shoulder; now they’re going to look for suspects with a tattoo on their shoulder. They finish talking, Teresa mentions how she wants to be there with Patrick when they discover who Red John is; Patrick agrees to those terms and then leaves. Cho and Wayne are interrogating an old balding man about where Brett is; though it seems that they’re not getting anywhere with him that much. It turns out that Brett is getting ready to elevate himself to a new level that men could never reach. Reede is at the scene of a crime, a man hang himself from a building; Patrick arrives to meet with Reede and talk about the Red John investigation, Patrick mentions to Reede that Red John has very powerful allies and that he doesn’t know who he can trust. Patrick then tells Reede that they should meet somewhere safe to speak about Red John, in case anyone else finds out. It then cuts to the sheriff hunting some deer from his car, but he’s interrupted by a call; turns out that Patrick is the one who called the sheriff, Patrick wants to ask a him a question. Patrick is in fact wanting the sheriff to help him, it seems that Patrick is going to have both Reede and the Sheriff show up at the same place at the same time. An old man receives a note that says Patrick is looking for him, the old man doesn’t look pleases as he walks into room that’s filled with what looks like a cult of some sort. The old man goes to the middle of a room along with two women, one woman removes her robes and the old man pours some dark red liquid on her body and then puts the blood on the other girls face. Apparently this is when the old man departs from the world, his death; though it seems that he believes that he’s going to be returning.

Teresa meets with a man inside of a diner, she needs help with an investigation, she lets the man know that Patrick believes that he’s one of the suspects of being Red John; she wants the man to go to a place at 8’o clock. Teresa asks Ray where Stiles is at, but Ray quickly denies knowing anything. Teresa found out that Stiles uses a private jet to travel, she tells Grace this and then asks Grace if she’s seen Patrick lately. Patrick is entering the house of a bald man with a mustache. Cho meets with Mr. Dumont I believe, they ask if they saw a private jet recently. They find out that Stiles was picked up from an airport last night, Wayne is ready to go with Grace to help with Stiles; but Teresa tells Grace to go alone instead. Patrick leaves the man’s house with what I assume is the shotgun. Grace meets up with Stiles, Grace tells Stiles that Patrick needs a favour; he asks what he could do, turns out that Patrick wants Stiles to meet him at 8 o’clock also. Stiles mentions that it might not happen, though Grace then threatens Stiles in order to get him to go meet with Patrick. Stiles mentions his missionary work in Equador, that he wanted to help a young man there; turns out that the man is now minister of state. He invited Stiles to visit him on foreign soil, this is pretty much Stiles saying that he can’t be threatened. Stiles then gets Grace to leave. Teresa and Patrick go and talk to the chief of police about discovering Red John, I assume the Patrick told the head of police to meet him at eight also; just like every other suspect of Red John. Patrick is going to handle Stiles on his own, that he’ll be persuasive if he has to be. Patrick shows Teresa that he got himself a shotgun for the special occasion, Teresa wants to talk about the next night because Patrick believes that Teresa is going to stop him from killing Red John. Teresa mentions how she’s changed her mind, that she’ll let Patrick killed Red John in order to be there and see it. Patrick believes her, but looks a little skeptical.

Patrick meets with Stiles on his own, Patrick instantly tells Stiles to meet him at eight or else he’s going to need more than the walls around him to keep him safe; Stiles isn’t frightened because he’s a dying man of some sort, Patrick doesn’t buy it. Stiles tells Patrick that the disease he’s got has spread in his blood, Stiles mentions that his time is precious and doesn’t want to waste it. Patrick mentions that it’s due to it being about Red John, that he’s close to solving the case. Stiles says that the FBI is the problem, that they’re the ones that are keeping him there. Patrick decides to help Stiles out with this little problem of his, the FBI see a car drive off and they follow it. When they open the door they see Patrick on his own, we then see Stiles getting in the back of a flower truck making his escape. Teresa finds Patrick; he tells her that “Stiles is in” they then make their way to the meet up place. Patrick texts all of the people who he believes could be Red John the meet up location. Patrick and Teresa are driving towards the meet up area, Patrick stops for a bit to see the sunset before he solves the Red John case once and for all. Patrick gets out of the car and walks towards the ocean a bit and looks at the sunset, Patrick then thanks Teresa for everything that she’s done for him from the beginning until now. Patrick tells Teresa how important she is to him and then he hugs her and thanks her. Patrick then mentions that he has a surprise for Teresa, he runs back to the car gets in and decides to drive away. Patrick decides to go solo on this mission, it then shows Patrick arriving at the house late at night once again with his shotgun. He drives up to his house and prepares himself for what’s about to happen. Teresa is seen walking on the side of the road, she tries to hitch a ride from someone, but she was unsuccessful with doing so. Patrick is seen looking around his house, he goes upstairs and looks inside what looks like to be his very own room from when e was younger. Patrick takes several deep breaths, because it brings back memories. Patrick leaves the house and goes to another one in the back, in here is where his last stand is going to take place. Patrick takes out the shotgun and is about to hide it. Teresa takes a man’s car to catch up with Patrick, she calls him and tells Patrick not to do it without her. Teresa then tells Patrick that he’s throwing his life away with doing this, Patrick decides to turn off his phone and begins to prepare for the Red John reveal. He’s now gotten a pistol to prepare himself and is putting the shotgun behind the bed in case of an emergency. He now sits on the bed and waits for the men to meet him, one person arrives. Patrick walks up to the door and hears a man whistling, the door is about to open and as it does it’s Stiles. Stiles then asks if he’s early, the another car arrives outside.

Teresa calls for back up, Patrick then begins to talk to the five men he invited to the meeting about Red John; Patrick then brings up that one of the men could be Red John. Ray tries to leave, but Patrick pulls a shotgun on him; he then mentions that none is going to leave; Reede tries to pull a gun out, but Patrick lets them know that he’s not afraid to shoot any of them. Patrick asks for them all to place their weapons on the floor, so he won’t need to worry about anyone; Patrick mentions that he’s been waiting for ten years for this very moment, that Red John finally made a mistake. That Red John has a tattoo of three dots on his left shoulder, Patrick wants them all to show proof that they aren’t Red John. Ray shows his shoulder it’s empty, Stiles doesn’t have a tattoo either, but the sheriff, Reede and the head of police each have three dots on their shoulders. We see a gunshot within the house, it then cuts to Teresa trying arriving at the meet up area. Teresa gets out of the car and begins to run, she goes to the first house she sees which is locked; she then finds the house in the back and runs towards it, she gets to the door and sees the house explode.