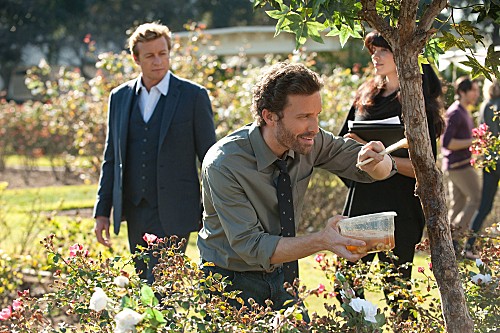 Tonight on CBS THE MENTALIST returns with a whole new episode called “Red in Tooth and Claw.” On tonight’s show the team delves into the surprisingly cutthroat world of academics in a case involving a graduate student at a natural history museum. Did you watch last week’s show? We did and we recapped it here for you!

On last week’s show a 25 year old case seemed to be linked to the Visualize cult and Red John. Lisbon contemplated about her future after arresting Tommy Volker. Jane narrowed down his private lists of Red John suspected after speculating that Red John is, or has connections to the Visualize cult.

On tonight’s show the team investigate a case involving a graduate student at a natural history museum and discover how ruthless the academic world can be.  Kyle Secor and Reed Diamond guest star on tonight’s episode.

Tonight’s The Mentalist episode 14 is going to be exciting, and you won’t want to miss. So be sure to tune in for our live coverage of The Mentalist — tonight at 10PM EST! While you wait for our recap, hit the comments and let us know how excited you are about the return of The Mentalist?

Tonight’s episode is focusing on a grad student named Linda whose body is found in a lab being eaten alive. Apparently she’s beneath flesh eating bugs, disintegrating while the school thought she was MIA.  They were under the notion that she was lost in the mountains. The director of the biology department insists that Linda had no enemies and that the students are all like family. Jane points out that family members kill each other all the time. One of Linda’s classmates, Megan claims that she was looked up to like a rock star. Her class mates tell Lisbon that Linda had recently split from her boyfriend, a cop.

The cop is interviewed but he insists that he wasn’t involved in her death. They had already split up but he says that he knows she was going places because she was brilliant. Linda had a dating profile on a website and when her boyfriend saw it, he dumped her.

Jane realizes that someone else wrote the profile and after interviewing multiple students he zeroes in on the girl that created it. She was jealous of Linda landing the hot cop and she just wanted to hurt her. She saw Linda start to finally make mistakes after the split and loved that it made her as human as the rest of them.