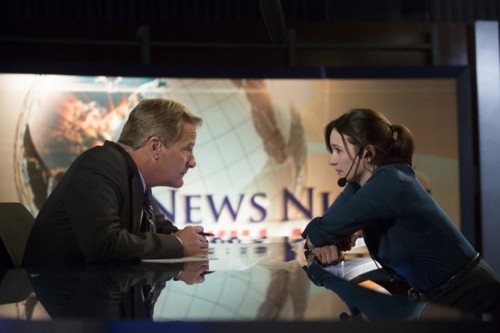 Tonight on HBO THE NEWSROOM continues with a new episode called, “News Night with Will McAvoy.”  On tonight’s show the newsroom traverses the slippery slope separating fact from fiction.

The Newsroom, is a behind-the-scenes look at the people who make a nightly cable-news program. Focusing on a network anchor, his new executive producer, the newsroom staff and their boss, the series tracks their quixotic mission to do the news well in the face of corporate and commercial obstacles-not to mention their own personal entanglements.

On tonight’s show Will is distracted during his telecast by a phone call and an unflattering Twitter post. Charlie (Sam Waterson) gets a visit from a longtime friend at the Office of Naval Intelligence, who has knowledge of Operation Genoa. Sloan (Olivia Munn) phases from humiliation to rage following a revenge posting. The newsroom traverses the slippery slope separating fact from fiction.

Tonight’s episode is going to be another great episode, which you won’t want to miss. So be sure to tune in for our live coverage of HBO’s The Newsroom Season 2 episode 5 — tonight at 10PM EST! While you wait for our recap check out the sneak peek video below of tonight’s episode!

Will has always been known for his professionalism if you discount being stoned during breaking news and his non-partial attack on the Tea Party. However the one person to throw Will off his game is his dad. The guy calls him right before Will goes to air.

Oh if only people knew some manners. Like Reese Lansing taking Sloan to task over nude photos. The photos violate Sloan morality’s clause, a fact she knows but in all honestly wasn’t purposely looking to break. Charlie tries to protect her from the inquisition sequel until Sloan admits that there are more photos floating out there.

Jim at least get some good news. Good for him not so much others. He got a man on the phone claiming to be inside a bombed building in Syria. A great breaking story. Again great only for Jim. All he has to do is verify that source and for the present he has to finish helping with the George Zimmerman case. That means waiting with Maggie for the longest download ever with the girl he used to love.

Also Will’s dad does have manners. It wasn’t him calling but the ambulance. His dad was taken to the hospital for a possible heart attack. Will is fine with that and ready to move on to his newest problem. A twitter troll has him pegged as rude to women. I wouldn’t have been such a big deal if her story didn’t get picked up by another new source.

Will hasn’t called his dad yet. Mac gets him to make the call but she wants to know what the twitter troll said about him. The troll is smart. Mac acknowledges that after the woman twitted will lost a viewer.

Jim noticed something being so close to Maggie. She’s drunk and she’s in the same clothes from yesterday. Maggie has been coming to work drunk for some time now. Jim tries to offer her help but she claims nothing is wrong. Gary is no help either. He wasn’t the one holding the child so he can’t say when Maggie will get better.

Maggie’s performance hasn’t fallen so she won’t be seeking any advice anytime soon. Nevertheless she does make a mistake. She trimmed Zimmerman 911 call in a way that leaves they open to apologizing to Zimmerman. That mistake is going stick with her.

Charlie has secret meeting with someone higher up in the intelligence department. The two fight like married women , that’s their friendship, to the point the G-Man is willing to reveal his true agenda. The story Operation Genoa needs to die and have a quiet funeral. As a friend he talks to Charlie about anyone of those soldiers they saved could have been Charlie’s son.

In his own way he was trying to explain that sometimes the greater evil can be justified. Will Charlie take the warning or dig deeper for the much larger story at hand? He’s Charlie, he’s going to dig and boy did he. He managed to get his hand on some papers that have finally mentioned the operation proving it existed.

Don’s problem gets a bit too big to handle and so Sloan steps in to help him. Don can get another new source to retract his inappropriate joke. Sloan tells him to have Will read a retraction on air to cut off the other story at the knees. Plotting revenge helps take her mind off of her own problems.

She goes to her ex‘s office and beats the crap out of him. She then uploads the photo of him bleeding on the floor. Don had gone with her for support and the two leave with smirks on. Now they both had their chance at revenge.

Mac comes to the end of Will’s show to try and reassure him about his dad but Will tells her his dad died. Will has known since the last break. He was fine throughout the show yet after he spoke with Mac he nearly fell apart on air. Still he’s Will the professional and he brings himself back to deliver the final part of the news.