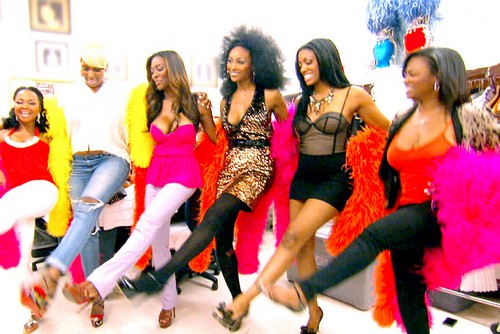 Tonight on Bravo is the season 5, seventeenth episode of THE REAL HOUSEWIVES OF ATLANTA and tonight’s episode is called “Strip is a Trip.” On tonight’s show the Atlanta ladies head down to Sin City for the ultimate girls’ weekend in Las Vegas. Did you see last week’s show? We did and we recapped it here for you.

On last week’s show the ladies are Los Angeles bound and this time they left the men at home. NeNe’s was excited about showing them her glamorous life in Hollywood, but when the girls arrived they just weren’t on the same page. NeNe’s temper exploded, and none of the ladies were left unscathed. As they aimed to get back on track with NeNe, Kenya can’t contain herself anymore in front of her rivals Phaedra and Porsha.

On tonight’s show after leaving Hollywood, the Atlanta ladies head down to Sin City for the ultimate girls’ weekend in Las Vegas. When Porsha refuses to go to the strip club because of Kordell’s alleged objections, the ladies decide to school her on how to gain some independence in her marriage. Kenya can’t play nice with Phaedra forever and finally confronts her on the last night of their trip.

Tonight’s episode is going to be another drama packed one, which you won’t want to miss. So be sure to tune in for our live coverage of Bravos’ The Real Housewives of Atlanta Season 5 episode 17— tonight at 8PM EST! While you wait for our recap, hit the comments and let us know how excited you are about the new episode of RHOA tonight and check out the sneak peek video below of tonight’s episode!

Kenya doesn’t want to hear her ex’s name again. She won’t give Phaedra any more ammunition. Kenya won’t pretend but she can be cordial. Kenya says her doctor gave her instructions to keep the drama out of her life.

NeNe has arranged a party bus to take the girls to Vegas while she rides first class. Phaedra says she is a southern belle and can play nice with anyone. Phaedra says that Kenya has a lot of characters inside of her and no one knows the real her.

Kenya says Phaedra has a lot to learn about being a beauty queen and the first is that it takes beauty. Phaedra thinks going to the stir clubs is the perfect way to find lost souls.  Khandi says she’s never taking a bus to Vegas again the next time she’s coming rich bitch style while NeNe wonders what’s taking them so long to get to Vegas. NeNe thinks it’s unacceptable that she’s always waiting on them.  The ladies finally arrive in Vegas but don’t have much time to get ready.

Porsha doesn’t want to go to the strip club because of Kordell. NeNe says that this is a girl’s trip and to forget about Kordell. Khandi says she came to have a good time and doesn’t understand why Porsha is being so serious. Cynthia says she’s a go along get along type of girl but strip clubs make her sad since she doesn’t like to see women take off their clothes. NeNe says it’s a girl’s night out and they’re not trying to disrespect their men.

Kordell calls Porsha. She wants him to know that she’s still concentrating on holding things down but she doesn’t tell him that she’s going to the strip club. She tells him she’s going to the mall. NeNe has pulled some strings to get the ladies backstage passes at one of the shows. NeNe says that everyone has to participate which is a message directly for Porsha.  Phaedra once gaain reminds everyone that she is a Christian and that God hung out with prostitutes; going to church doesn’t necessarily make one a Christian and going to a strip club doesn’t make you a sinner. NeNe says there is a difference between being traditional and controlling. Porsha doesn’t think her husband is controlling and she respects him. Porsha respects their opinion but wishes they would mind their own business.

Kenya has some fun pretending to be a showgirl while backstage. They then decide to go shopping. Cynthia decides to have some fun and rides one of the mechanical bull. Kenya says she’s impressed and she’s sure Peter is a happy man.

Khandi wants to give the other ladies an advance sampling of her sex toys. She tries to explain how the different toys will give them orgasms. They all take turns playing the games. NeNe thinks Porsha ate her strawberry like a prude, but Phaedra has no such problems. Kenya doesn’t like how her strawberry eating is criticized by Phaedra. Phaedra thinks Kenya is a drama queen; there’s always some drama and she has to get some level of attention. Kenya says she is over the phoniness.
Kenya tells Phaedra that she thinks she intentionally hurts her. Phaedra says it’s a two way street. Kenya says it was hurtful that Phaedra would say that she has a mental illness. Phaedra says that if she wants to have a serious discussion, she shouldn’t do it in a mocking manner. Kenya says Phaedra cut her to the white meat and attacked her character. Kenya says she doesn’t need an apology because she has shown her that it means nothing. NeNe says that Kenya was able to see Phaedra for who she really is.