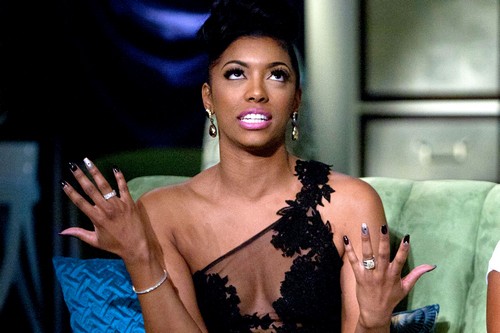 Tonight on Bravo is the season 5, twenty-two episode of THE REAL HOUSEWIVES OF ATLANTA and tonight’s episode is Part 3 of the reunion show. On tonight’s show the husbands and significant others join to give their take on the season..  Did you watch last week’s episode? We did and we recapped it here for you.

On last week’s show in the Reunion Part 2, Kim Zolciak returned to hash it out with the women and to reflect on her departure from the show. NeNe puts Phaedra in the hot seat over behind-the-scenes drama that has never been revealed and Kenya joins in on the attack.

On tonight’s show during Part 3 of the reunion, the husbands and significant others join to give their take on the season. Kandi talks about her new life with Todd and their recent engagement, and the men chime in on Kenya and Walter’s breakup drama. Tune in for other must-see moments, including which Housewife is accused of allegedly “sexting” one of the husbands!

Tonight’s episode is going to be another drama packed one, which you won’t want to miss. So be sure to tune in for our live coverage of Bravos’ The Real Housewives of Atlanta Season 5 episode 23— tonight at 8PM EST! While you wait for our recap, hit the comments and let us know how excited you are about the new episode of RHOA tonight.

It’s the final installment of the reunion.  Let’s see what’s left of the housewives…

Andy is surprised that the girls didn’t go after Kim much harder. But Nene tells everyone about the heartfelt text Kim and her exchange and things are looking good.

Kandi’s relationship is up for discussion. They’re reviewing the footage. Andy tells everyone that her fiancée Todd actually works for the show and was with them for a lot of filming. They then address Nene’s opinion on Kandi’s ring. Kandi feels that Nene did throw some shade on the ring but the silence after that is quickly filled with a new topic.

Kenya’s relationship with Walter us under review. Walter had reportedly did an interview while the show was airing. He said Kenya hired him to be a pretend boyfriend. Kenya tells Andy that she never hired Walter. However during filming, Nene had mentioned that the two didn’t appear to be in a relationship. Phaedra’s take that although at the time Kenya’s tears looked real; her flirtatious behavior appeared odd.

Kenya mentions she has questions about Walter’s sexuality. When they were dating in beginning; she mentions how they didn’t sleep together for a while. That’s why she took offence when Phaedra called her whore. She never called Phaedra that. Andy asks everyone if they thought the relationship was real and no one answers.

Walter had asked Kandi out during his relationship with Kenya. Even now Walter is tweeting up a storm. Kenya says it’s to be famous. Kandi says it’s to defend himself. Either way Kenya is seeing someone she’s keeping mum about it. She’s only willing to say that her new guy makes her happy.

The husbands are out in and about, all except Kordell [tis was filmed a week before the Divorce]. Andy mentions that this season, the men all had some male bonding. Gregg talks about the comments he made about Kenya and says he just thinks she sometimes needs to chill.

Todd tells everyone that despite Marlowe’s accusations, Kandi isn’t a sugar momma.

Then Walter re-enters the discussion. Peter thinks they were never together. The guys are questioned over why they kept inviting Walter everywhere. Peter and Apollo defend themselves by saying that they befriended Walter and never got the chance with Kenya. The two men, Apollo and Peter, get into an argument with Kenya over Walter.

Andy asks Apollo about how he feels about Kenya now. He calls her fake when she replies “maybe you should stop texting me”. It comes out that Apollo and Kenya have been texting each other.  That’s why Phaedra called her a whore. Kenya then goes out of the way to tell Phaedra to get an aids test. Peter points out that if Apollo was pressing up on Kenya; why didn’t she shut it down?

Andy asks Porsha about Kordell. She tells him that they’re doing great. They have some trouble but her marriage is solid. She calls it hurtful that the girls were harsh on her marriage. Nene stands by her decision that Kordell is too controlling. Porsha then goes on vehemently to defend her marriage. It’s not perfect and that’s why they are working on it. Porsha does want both a career and children.

When asked about Kordell, Peter says he has some issues with him and that he’s mad that Kordell isn’t sitting behind Porsha right now.

Porsha surprisingly sings a little bit and she’s not bad.

They’re joking and reminiscing. Nene thinks it was lot better this year. But she then goes on to say they need a new cast member. Phaedra seconds that’s. Should a cast member be replaced?