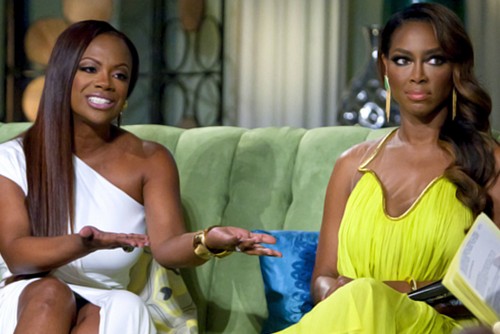 Tonight on Bravo is the season 5, twenty-first episode of THE REAL HOUSEWIVES OF ATLANTA and tonight’s episode is Part 1 of the reunion show.  On tonight’s show the Atlanta ladies get together to set the record straight on some of the most talked-about antics of the season.  Did you watch last week’s episode?  We did and we recapped it here for you.

On last week’s show now that Kenya had moved beyond Walter and the Battle of the Booties with Phaedra, she decided to throw a big party; everyone ahd to come in assigned costumes to her Hollywood Icons gala. The ladies were all dressed to impress, but one rogue Housewife turned an evening of elegance into a full-fledged showdown and this time Kenya might have gone too far.

On tonight’s show the ladies will take to the couches to discuss this season’s drama, catfights and screaming matches.  This year Bravo is splitting the reunion into three parts.  Tonight is part1 and if you take  a look at the preview below it looks like the housewives are dressed to the nines for the reunion.

Tonight’s episode is going to be another drama packed one, which you won’t want to miss. So be sure to tune in for our live coverage of Bravos’ The Real Housewives of Atlanta Season 5 episode 21— tonight at 8PM EST! While you wait for our recap, hit the comments and let us know how excited you are about the new episode of RHOA tonight.

Tonight on The Real Housewives of Atlanta, it’s time for the Reunion show, where we’ll find out all the little tidbits the camera couldn’t catch. All the girls are back along with the mischievous Andy Cohen ready and they are willing to get ounce of revenge they could possible earn.

When there are first shown, Kenya has brought a huge fan. Not a person but a decorative object. Also Kandi mentions she’s suing Kim over the rights of “Tardy to the Party” with Phaedra representing her.

Andy asks the ladies if anyone was offended when Phaedra came out in her fishnet get up, Kandi and Porsha deny it but Kenya of course found it offensive that a woman would do that in front of another woman’s man. Phaedra hits out that no lady was offended. When Andy brings the conversation around to Kenya’s flirting with Apollo, Phaedra admits she had a little talk with Apollo but that no one raised their voices.

Yet there is still an issue with Kenya after she admits she felt let down when only two of the other woman contacted her about her health scare. Nene tells her to be serious because did she really expect Porsha or Phaedra to call her. Being stubborn to the end Kenya says “Yes” she thought everyone would rise above the pettiness. Porsha gets upset about that and put in her own two sense to say that Kenya hadn’t change as a person and she doesn’t practice what she preach in being there for other women.

Now the drama is focused on Nene. Andy mentions the dinner she threw and that the other girls weren’t allowed to enter for being late. Kandi admits she throws shade at Nene but Nene denies she’s ever done that to Kandi. The ladies disagree over if any of them have ever crossed the line.  With no budging on the issue Andy turns the conversation back to Kenya. This time her problem is with Porsha.

Reviewing the last season’s footage, Kenya says she doesn’t get upset when someone confuses Ms. America and Ms. USA, she got upset because Porsha meant to insult her. Meanwhile Porsha argues that Kenya has always been jealous of her and her marriage.

The viewers pointed out Cynthia has been more assertive and showing her backbone but when she’s told about how some see her as a backstabber, she can only say “Can’t please everybody”. Andy asks her about when she let Porsha go and Cynthia replies she did so in order to preserve their friendship.  When Kenya’s expertise in pageants come up; nothing stops Porsha from telling Andy that Kenya talks about what she did for African-American community but never mentions the first black MS USA.

Before those two could go another round, Andy turns the conversation towards the work out video. Phaedra and Kenya are confused over whose video is selling better, with each claiming oneupmanship. Phaedra is hitting back after the body remark that Kenya made. Each come up with outlandish claims against the other until it sinks in catfight where no one is making sense. Andy stops it, only to show Kenya’s music video “Gone with the Wind Fabulous”.  This was supposedly the first time Phaedra saw the video and so she and Kenya continue in trading insults. As their drama continues Kandi has to at one point tell Kenya “can she flick her fan somewhere else”.

Kenya and Phaedra are still going at it with each taking turns talking over the other. They finally talk about turning the fight into physical. Kenya apparently isn’t afraid to fight an 8 month pregnant woman.  In the end of part 1, Kenya’s earlier statement seems to be coming true. She had mentioned earlier that Phaedra is only relevant to her. With all of this fighting and that leaves none of the other woman much room; it’s becoming true.

On next week’s promo, Kim returns and her problems with Kandi is going to blow up into a fight and shockingly Nene and Phaedra now have a problem. All of this won’t even compare to when the husband joins them. What happened between Apollo and Kenya?