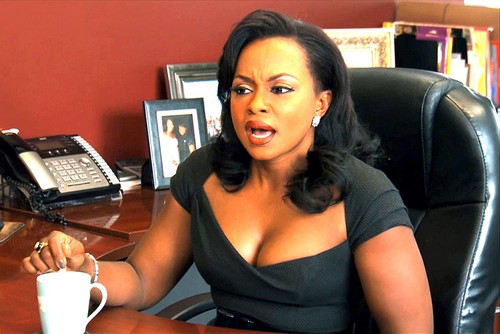 Tonight on Bravo is the season 5, eleventh episode of THE REAL HOUSEWIVES OF ATLANTA and tonight’s episode is called “The Donkey Kicks.” On tonight’s show Things go awry when Kenya feels she’s worth more of a cut than Phaedra is willing to offer her for the Donkey Booty video.  Did you see last week’s show? We did and we recapped it here for you.

On last week’s show NeNe prepared to leave for LA to begin shooting The New Normal, she had many challenges thrown her way. Kandi and her boo continued to settle into their new life together, causing her to confide in Porsha about the thought of marriage. A pre-nup conversation was far off for Kenya — things hadn’t been right for a while with her and Walter. After heart-to-hearts with Aunt Lori and Kandi, she took Walter on a fishing date to give it one last shot at reeling in her man.

On tonight’s show Phaedra and Apollo are eager to begin working on their Donkey Booty video, but things go awry when Kenya feels she’s worth more of a cut than Phaedra is willing to offer. As NeNe takes up residence in Hollywood, she struggles with how to focus on her acting and leave the home details to Gregg. Kandi celebrates Todd’s birthday with a huge surprise party, but she goes on the defensive when Kenya interferes with Todd’s celebration by bringing up her business beef with Phaedra.

Tonight’s episode is going to be another drama packed one, which you won’t want to miss. So be sure to tune in for our live coverage of Bravos’ The Real Housewives of Atlanta Season 5 episode 11— tonight at 8PM EST, yes a new time! While you wait for our recap, hit the comments and let us know how excited you are about the new episode of RHOA tonight and check out the sneak peek video below of tonight’s episode!

If you watched last week then you saw the somewhat hilarious break up of Kenya and Walter. It was obvious that this kinda/sorta couple was over weeks ago, right about the time that she started pushing for a proposal. Tonight’s show begins with Kenya’s aunt and cousin dropping by her house to hear all the supposedly horrific details. Kenya’s cousin tells her that Walter hit on her years ago, but she still thinks he’s gay.

NeNe is in the process of moving into a house out in LA. Her career has totally taken off and she is stressing out about juggling homes and loyalties.

Phaedra and Apollo have been working on a workout video that Kenya is now going to market. I’m not sure if Kenya is really invested in the project or if it’s Apollo’s muscles that she’s looking for an excuse to oogle.

I think this is where we get to see NeNe and Greg inch their way back together. He is helping on the back end to make her move easier and you can see that there are serious sparks still between them.

Phaedra is a smart chick and decides to consult with her attorney about Kenya’s business tactics and he tells her to take the video elsewhere. Kenya comes in for a meeting and it gets a bit ugly when she’s confronted about her inflated budget. She believes that if she gets Apollo alone then she can get the deal signed, but that’s not going to happen any time soon. Phaedra is ready to go elsewhere.

Kandi throws a 39th birthday bash for Todd and at the party Kenya decides to swoop in to talk to Apollo alone. Phaedra says she doesn’t care if Kenya conducts a prayer circle around her husband, he’ll make no decisions without her. Kandi literally flies Todd in for the party and insists the business talk.

Cynthia calls Kenya over to the Bailey Agency in confusion. Phaedra tweeted that casting for her workout video would take place at Cynthia’s agency, but she knows nothing about it! Kenya tells her that Phaedra thinks everyone is going to work for her Donkey Booty video for free.

The girls have a monster blow out and Kenya decides there’s no way she’s working on this project. Tune in next week to see what happens next!