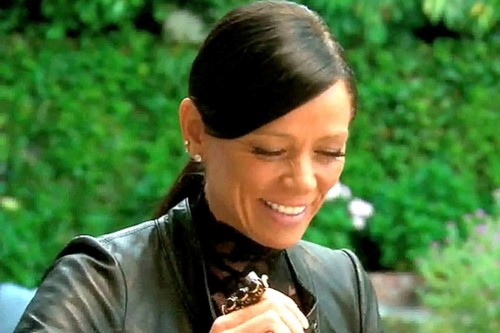 THE REAL HOUSEWIVES OF BEVERLY HILLS returns to Bravo tonight for a whole new episode called, “Faint Chance.” On tonight’s show the ladies find Lisa’s spill on ‘Dancing With the Stars’ suspicious, while Kyle offends Carlton by killing a bee.  Did you watch last week’s premiere episode?  We did and we recapped it right here for you.

On last week’s show  the beautiful, wealthy ladies of Beverly Hills and the sexy, dramatic servers of SUR were back for a special two hour crossover event. To celebrate the centennial of Beverly Hills and meet other local business owners, Kyle threw a cocktail party at her home for the city’s Chamber of Commerce. She hired Lisa’s posh restaurant, SUR, to cater the event but in typical fashion, one of her servers begins talking back and Lisa had to send her home before the guests began to arrive.  At the party, Kyle tried to put aside her differences with Yolanda after last year’s explosive reunion, while Lisa struggled to keep tensions down between Brandi and Scheana.

On tonight’s show Brandi, Kim, Kyle and Mauricio show up to support Lisa and her sexy dance partner Gleb on Dancing with the Stars. Meanwhile, Yolanda faces a surgical procedure in her efforts to battle Lyme disease. Kyle hosts a lunch for new friends, Joyce and Carlton, but the meal goes awry when Kyle encourages the killing of a bee, offending nature-loving Carlton. Brandi’s mother visits from Sacramento and helps her settle into her new home. Kim and Kyle watch Lisa’s next dance performance, questioning the sincerity of Lisa’s infamous faint.

Yolanda continues to battle the effects of Lyme disease. As she puts all of the toxins inside of her body though doesn’t mean she’ll miss the opportunity to do a cleanse. It has constantly getting shots and check-ups. Luckily she had her family at her side to support her. Especially her husband who admittedly wasn’t always the best of husbands. He has to be there as she goes through yet another operation. This time to remove the device so close to her heart.

Speaking of family dynamics. Carlton lets in her personality. She’s a bit out there religiously. Her house is decorated into her childhood dream of a castle with crosses all around but she said she identifies more with the pentagon. Whatever that means. Her children are well adjusted according to Carlton. Her daughter has only ever sworn once. Which is a blessing when Carlton tends to swear all the time.

She’d probably be better off friends with Brandi. Brandi is unconventional as well. But she’s currently focusing on her new home and how better to expand her brand. She’s always wanted to have enough in order to look after herself and her children. Still she wanted to be able to take care of her mom as well. Her dad could have made the shortlist but he’s becoming more conservative while his daughter remains her outrageous self. It’s not surprising those two no longer mix easily.

Lisa’s debut on “Dancing With the Stars” goes well. Some of her friends showed up to support her. Such as Taylor who finally made a reappearance. Also Kim and Kyle made it. Later whatever tension there could have been never raised it head at dinner. All in all everyone was silly and had found instead of creating drama.

But will the newbies be able to keep up the camaraderie. Kyle had invited the new girls Joyce and Carlton to hang out with her. However trouble arose when Kyle interrupted Carlton’s story. Carlton was offended. She also got offended when they killed a bee. She gets easily offended. And bored. Her stories may take a while but listening to someone else’s long story makes her bored. A fact that can easily be read on her face.

On the other side of the hills, Lisa throws a small get together. She invited Brandi and Yolanda. They wanted to discuss Kyle’s party including the new girls whom they like and Kyle who they kind of don’t. They feel Kyle has stabbed them all in the back at one point in time. It’s going to take a lot for her to get back in their good graces. Unfortunately Kyle doesn’t know she’s in their bad graces.

Kim got a dog trainer. Her beloved pet for a year doesn’t like listening. He eats her furniture and her clothing but she gets upset when her dog was left shaking by the trainer. He explains he had to show the dog who was the master. She does have a pit-bull. It’s a natural vicious animal and she definitely needs to get him under control. Her problem is she doesn’t know how to be firm with him. In doing so she got emotional because both her and the dog are readjusting.

Even though she has a lot on her plate, Lisa wants to add more to her to-do list. She wants to open a gay bar. It requires permission planning, decorations, and time. The last she’s running short of what with running the establishment she already owns and trying to dance a new routine every week. But her husband swears he’ll help with all he can.

Kim and Kyle are watching “Dancing With the Stars” at home when they see Lisa’s fall. Lisa at the time claimed all the stress she’s been under but the sisters believe that fall was completely fake. They’re rewinding the footage and watching it in slow motion. They guess Lisa wanted out of the competition and that’s how she wanted to make her exit. They can’t help making fun of what they saw. Fake fainting and all. It’s not every day a woman can faint with such grace.