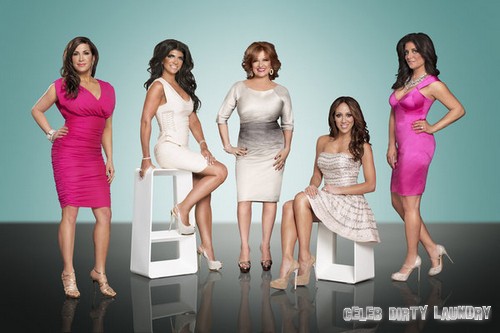 Tonight on BRAVO our favorite Housewife show THE REAL HOUSEWIVES OF NEW JERSEY returns with it’s season 5 premiere.  You know you have been missing Teresa Giudice and all her craziness as much as we have.  Tonight’s show is called, “Garden State of Emergency” and the ‘Wives get slammed by Hurricane Sandy, leaving their vacation homes as destroyed as their relationships.  Did you watch last season’s reunion shows?  We did and we recapped them here for you – PART 1 – PART 2 – PART 3.

On tonight’s show following an explosive reunion, the ‘Wives get slammed by Hurricane Sandy, leaving their vacation homes as destroyed as their relationships. More than a year of silence widens the cracks between Teresa, Melissa, and Joe. Jacqueline faces her son’s autism diagnosis, as Kathy learns the “art of war” from her sister, Rosie.

Caroline has changed her address, but can’t move far enough from the Giudice and Gorga drama. Her shocking offer to Joe Gorga could lead the ‘Wives toward reconciliation or an all-out war.

Tonight’s episode is going to be filled with more Housewife drama that you won’t want to miss, so be sure to tune in for our live coverage of the show tonight at 8 PM EST! While you wait for our recap hit the comments and let us know how excited you are about the new season of The Real Housewives of New Jersey! Also we have a sneak peek video of tonight’s season 5 premiere below!

RECAP: Oh my gosh, it’s like Superbowl Sunday for Bravo fans! The current season of RHONJ debuts right about now and filming began a few weeks after Hurricane Sandy slammed the east coast. The Giudice’s second home at the shore was pretty much gutted. Teresa’s brother Joe’s home also took a beating. Even after facing total devastation the two families’ never reached out to even check on each other. The kids all miss each other but the adults have now not spoken for a year. Teresa has her kids packing up a bunch of glamorous clothing to give away to those who lost everything. Those around them may not have a bed to sleep on but they’ll sure have enough hot pink boas to last a lifetime!

I have to hand it to Jacqueline, she has gone from hiding her son Nicholas’ autism to being very honest about it. We actually see Jacqueline working now with Nicholas and not giving in as he struggles to think of the right word to say to ask for what he wants. She is heartbroken to not be able to hand him everything, but after holding her ground he gets it right and the moment is bittersweet. I’m betting it’ll be the most real thing that happens tonite.

Melissa’s daughter Antonia is really missing her cousin Melania. She wrote her a letter at school and Melissa and Joe decide to actually mail it. Will these two little girls be what helps thaw the ice between the Giudice and Gorga families? Maybe. Melania got the letter and Teresa puts her on the phone with Antonia. Meanwhile Gia is turning into a mini Teresa. She takes the letter and starts making snippy remarks before taking it to show her father.

In the past, Caroline has been accused of clinging to her sons. She has now actually packed up and moved with her husband, to Hoboken- where the boys now live! While Melissa and Joe are sitting with Caroline she texts Teresa to try and arrange a play date. Achieving world peace might be easier than getting these two ladies to agree on anything. Both want to take the kids.

Eventually Gia sends a text on Teresa’s behalf agreeing to meet with Melissa and Melania for a snake.

The ladies finally decide to meet at a bead store and muddle through a tense reunion as their daughters are clearly thrilled to see each other. At the same time Caroline meets with Joe Gorga for coffee. Caroline thought that maybe Melissa was preventing Joe from mending fences and he denies it. He thinks of Caroline as the sister he never had and tells her he simply isn’t ready to deal with Teresa again.

Teresa and Melissa realize during a really tough talk that their daughters have communion parties scheduled for the same day and Teresa decides to be the bigger person and move the date of her Gabriella’s party. Melissa just wishes that Teresa would apologize for the whole strippergate thing and they could move on. I think Teresa’s way of apologizing is pretending it didn’t happen while calling herself the bigger person!

This is just the beginning of what will no doubt turn into a crazy season for RHONJ! Tune in next week for more!