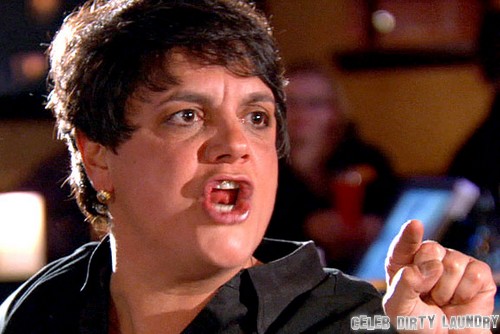 Tonight on BRAVO our favorite Housewife show THE REAL HOUSEWIVES OF NEW JERSEY returns with and all new episode called, “Everything Is Coming Up Rosie.” On tonight’s show Rosie extends an olive branch to Teresa.  Joe and Teresa are furious at Melissa and they confront her.  To get caught up for tonight’s crazy episode if you missed last’s week, you can read our full and detailed recap, right here.

On last week’s show crazy was in the air as Teresa headed to the gym to blow off some steam but lost her cool during a run-in with her brother, Joe. Kathy threw a joint birthday bash for her husband, Rich, and daughter, Victoria, but Caroline dropped a bomb that caused one guest to completely meltdown. As Melissa stuggled with a dark secret from her past, Jacqueline released some stress with her trainer over unresolved issues with Teresa.

On tonight’s show tempers flare between Joe and Melissa over accusations Teresa lobbed (along with her water bottle) at the gym. As Jacqueline deals with a crushing setback with her son, Caroline fears her kids are following too closely in her husband’s shoes. Meanwhile, Richie oversteps, sparking the wrath of Kathy, and Rosie extends an olive branch to Teresa. But all bets are off when the unpredictable cousins face-off.

Tonight’s episode is going to be filled with more crazy Housewife drama that you won’t want to miss, so be sure to tune in for our live coverage of the show tonight at 8 PM EST! While you wait for our recap hit the comments and let us know how excited you are about the new season of The Real Housewives of New Jersey! Also we have a sneak peek video of tonight’s season 5 episode 5 below!

Tonight’s episode of The Real Housewive’s of New Jersey picks up exactly where we left off last week. Joe drives home to Melissa after having a blow out with Teresa at the gym. He tells Melissa that Teresa accused her of slamming her on Twitter and Melissa owns it. Joe is furious because Tre is his only sister and Melissa shouldn’t, as his wife stoop to Teresa’s level.

Next we get to watch Teresa reiterate her version of the same story to her douche bag husband.  They talk while watching Milania play soccer and Joe believes that Joe Gorga has a Napoleon complex. Of course Joe needs to explain who that is and why he mattered to Tre!  After their talk Teresa calls Caroline to fill her in on the meeting with her brother. By now Caroline has learned her lesson and refuses to even offer an opinion on things.

Kathy has turned her cannoli’s into a booming business and her husband Richie decides to surprise her by ordering the packaging  for her. It’s plain white boxes when Kathy wanted something totally different and with bows. She is furious that he invaded her territory and stepped on her toes.

Caroline sits down and has a talk about her marriage with her sons. They accuse her of not knowing her husband at all and she insists it’s quality over quantity. Meanwhile Joe meets up with Ruthie to discuss the Teresa mess.

Jacqueline is having a hard time working with Nicholas. Taking care of him and finding ways around his autism is extremely hard for her. After one difficult encounter she is leveled in a million pieces. Caroline is worried because her grown kids have their priorities and work comes first. Caroline worries that their personal lives are going to suffer.

Perhaps Kathy won’t be as mad at Richie now that he bought her space for a real business. Okay I thought wrong. Kathy is annoyed with the kitchen  and lets Richie have it because he’s not letting her make any decisions on her own.

[8:59:11 PM] Cate Meighan: Perhaps Kathy won’t be as mad at Richie now that he bought her space for a real business. Okay I thought wrong. Kathy is annoyed with the kitchen  and lets Richie have it because he’s not letting her make any decisions on her own.  The two end up knee deep in a fight, slinging insults at each other. In the end Kathy realizes that Richie is having a hard time coping with her working.

Melissa has her family over for a visit and she finally talks to her mother about the book that she is working on. She asks her mom if she realized that when her father left for days at a time he was likely cheating. Her mom says she never let herself think about it then but yet, he likely was cheating.

Teresa finally steps up in an attempt to fix things with Teresa. They sit together for a drink and start to fight over the rough family tensions. You know Rosie can’t have a civil conversation so in no time flat she’s screaming and banging her fists on the table. Ruthie is losing it and I’m just waiting for the table to flip. Teresa decides that she wants to try a weekend holistic therapy thing with her brother and Kathy may work. Tune in next week to see what happens on RHONY!