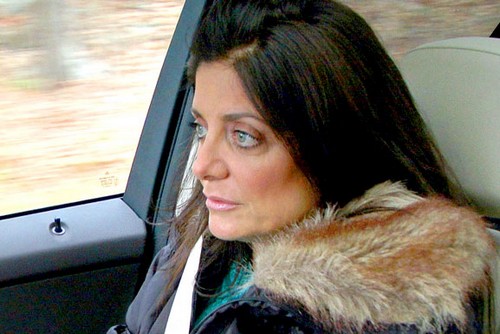 Tonight on BRAVO our favorite Housewife show THE REAL HOUSEWIVES OF NEW JERSEY returns with and all new episode called, “A Manzo of Her Word.” On tonight’s show Caroline and Teresa face off in a heated exchange that puts Caroline in the hot seat.  Did you watch last week’s season 5 premiere episode?  We did and we recapped it here for you!

On last week’s show following an explosive reunion, the ‘Wives get slammed by Hurricane Sandy, which left their vacation homes as destroyed as their relationships. More than a year of silence widen the cracks between Teresa, Melissa, and Joe. Jacqueline faced her son’s autism diagnosis, as Kathy learned the “art of war” from her sister, Rosie.  Caroline changed her address, but can’t move far enough from the Giudice and Gorga drama.  Caroline made a shocking offer to Joe Gorga.

On tonight’s show after an awkward afternoon with Teresa, Melissa is motivated to sell her house and move away from her sister-in-law. Kathy’s son, Joseph, tests her patience but it’s her husband who needs a time out. The Lauritas host a poker night but all bets are off when a surprise from Chris leaves Jacqueline in tears. Caroline and Teresa face off in a heated exchange that puts Caroline in the hot seat.  If you want to check out some spoilers for the new season, head over  to read our season 5 spoiler post, CLICK HERE …

Tonight’s episode is going to be filled with more Housewife drama that you won’t want to miss, so be sure to tune in for our live coverage of the show tonight at 8 PM EST! While you wait for our recap hit the comments and let us know how excited you are about the new season of The Real Housewives of New Jersey! Also we have a sneak peek video of tonight’s season 5 episode 2 below!

And Here Is The BEST LIVE RECAP!!!

Tonight’s Real Housewives of New Jersey begins in the Giudice kitchen. Teresa is cooking with her daughters and it’s clear that her own behavior has rubbed off. As Tre talks Melania keeps mimicking and making fun of her. This is exactly the kind of child that Teresa will end up raising- a mini-her. Meanwhile over at the Gorga’s they are sitting down with their realtor. Melissa is desperate to sell her house and put lots of distance between herself and Teresa. The market sucks and no one in Jersey really has a cool 3 million to pay for their mansion.

Last week we saw Caroline sit down and talk to Joe Gorga about repairing his relationship with Teresa. Now Caroline is going to try and work some magic by nudging Teresa back towards Joe. She’ll need more than luck to make that happen. Teresa gets the text while she is hanging out with the infamous Kim. D.

Jacqueline has been asked by Parents Magazine to shot a video blog about her autistic son. She says that complete strangers had reached out to her and now that she has gotten stronger she wants to be able to help others. Chris Laurito also has a talk with Joe Gorga and tells him about the stress of having an autistic son. The thing that we didn’t know was that before Jacqueline had Nicholas she had five miscarriages so to them he already was a miracle baby. Of course Jacqueline gets really emotional talking on camera about her son but by now I think we all expect her to crack here and there.

Teresa tells Joe that she thinks that Caroline wants to talk to her about her brother. Teresa starts trying to figure out how Melissa got him under her spell and she figures it circles back to an old Italian thing where if a man has oral sex with a woman when she has her period he is instantly controlled by her. Tre believes that this is how Melissa got Joe!

The Gorgas are having an open house and their kids are running rampant. Not only that but people are walking through and laughing at a busted bathroom and giving them heat because for 3.8 million there should be a pool included. I wonder if Melissa watched this scene play back and just died when she saw how bad she was being mocked.

Caroline sits down with Teresa in a private room and basically gets nowhere. Teresa doesn’t want to hear anything and keeps throwing it in Caroline’s face that she and her sister Dina are still a mess. She tells her to fix her own mess and to leave Joe Gorga alone. Caroline keeps trying to have Tre even start with Kathy.

Jacqueline and Chris have the Gorgas and Wakiles over for a poker night. Chris has been working with Nicholas on saying I love you again and he hopes that he’ll tell Jacqueline on this night. Her son hasn’t said the words in a year and a half.  Chris brings Nick out and he manages to tell Jacqueline that he loves her and honest to god the whole table bursts into tears. It’ll be one of the best moments of the season and it gives Jacqueline reason to believe that her son can accomplish more.

Caroline is determined to convince Teresa to visit her father with her brother. She believes that he deserves to see his grown kids together. Teresa tells Caroline to take a message to her brother. If he misses her then he needs to reach out and she’ll welcome him with open arms. Will it work? Tune in next week to find out on The Real Housewives of New Jersey.