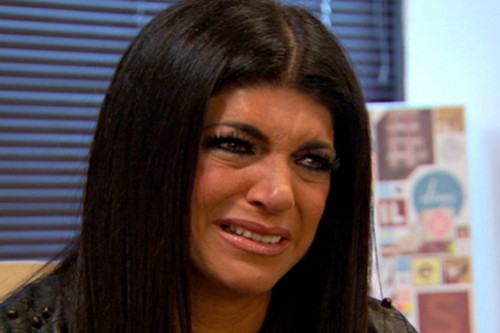 Tonight on BRAVO our favorite Housewife show THE REAL HOUSEWIVES OF NEW JERSEY returns with their season finale called, “Salon, Farewell.”  On tonight’s show the grand opening party takes a distressing turn when a new face becomes involved in a confrontation with the Giudice-Gorga clan. To get caught up for tonight’s crazy episode if you missed last’s week, you can read our full and detailed recap, right here.

On last week’s show the heat is on for Caroline’s boys as they open their new restaurant and faced their harshest critic yet. Meanwhile, Melissa traveled to Orlando for a test of her own: a live radio performance that could reignite her music career. Back in NJ, both Teresa and Jacqueline faced attacks on their integrity as the opening of a new boutique brings them face to face with their enemies.

On tonight’s show the grand opening party takes a distressing turn when a new face becomes involved in a confrontation with the Giudice-Gorga clan. Teresa wants to clear her name, but harsh accusations leave everyone wondering if she’s really behind rumors about Melissa’s marriage. Kathy, Jacqueline, and Caroline try to focus on their own families, while struggling to repair the damage that has been done…

Tonight’s episode is going to be filled with more crazy Housewife drama that you won’t want to miss, so be sure to tune in for our live coverage of the show tonight at 8 PM EST! While you wait for our recap hit the comments and let us know how excited you are about the new season of The Real Housewives of New Jersey! Also we have a sneak peek video of tonight’s season 5 finale below!

The September 29 episode of The Real Housewives of New Jersey is the season five finale. This episode is also the end a three year story line of fighting among the cast. Earlier in the season we saw the families make up during a retreat in Lake George and a healing vacation in Arizona. Despite the progress the cast has made in healing their relationships there is still something that needs to be addressed.

Kim DiPaoloa’s friend Penny Drossos and her husband Johnny (The Greek) Karagiorgis have been tweeting nasty things about Melissa and Poison Joe Gorga for the past two years. The scumbags spread rumors that Mel cheated on Poison. Johnny The Greek also Tweeted stories about Jacqueline and Chris Laurita. He said the Laurita’s son Nicholas does not have Autism and they couple used their child for publicity. Penny was confronted by Mel and Poison in the last episode. Penny says Joe’s sister Teresa Giudice put her up to spreading the infidelity rumors.

This week everyone attends the Pocshe 2 grand opening at Moxie Salon. Poison and Mel confront Penny again. Poison and Jacqueline also confront Johnny The Greek . Both Penny and Johnny point the finger at Teresa. Tre of course denies being involved in the Twitter attack. A physical fight breaks out when the two men start to raise their voices. It’s been reported that Jacqueline and Chris were also involved in the fight. Bravo did not air the fight, just some of the audio. This was for legal reasons. Poison, Chris and Jacqueline are being sued by Johnny The Greek for assault. They are due in court in October.

The following day Tre and Juicy get together with the Lauritas. The women start to talk about the fight and Tre finally admits she had a part in hurting Melissa. Jacqueline is pleasantly surprised and encourages Teresa to continue talking. When the men walk back into the room Tre freely offers to tell them what she said to Jacqueline. Chris tells Teresa even though he loves his estranged sister Dina Manzo he understands it makes you feel better to hear bad things about the person you are fighting with. He says its called being human. Chris also tells Tre she has to tell her brother she had a part in hurting Melissa. I have to admit it was a relief to see Teresa drop her guard and just be honest. We’ve known all along that Teresa had it in for her sister in law, and it was tiring to watch her fight tooth and nail against the allegations. The others played their part, too, in the family fight. They hit back viciously. It’s a relief that the air has been cleared and everyone has made up. The story has gone on for three seasons and it got old.

A few days later at the BLK offices everyone got together to test some new flavors. Teresa took Poison aside and confessed to him her part in the Twitter attack and hurting Melissa. She reiterated to Poison what she told the Lauritas. Poison listened carefully and when Tre apologized he was very happy to hear it. Joe forgives Tre and gives her a big hug.

The future of The Real Housewives of New Jersey has yet to be determined. Bravo has not started talks with the ladies about doing a season six of the show. There has been speculation the show will be canceled due to the indictment of Tersea and Juicy on 39 counts of fraud. Their legal situation has been a big headache for Bravo, especially because the network may have to get involved in the case. The show aired footage of Tre and Juicy talking with their bankruptcy lawyer. Unused footage could admitted as evidence against the couple. Bravo executives and producers may be asked to testify against Tre and Joe, asking how much they knew about the fraud the couple committed while the show was being shot.

If the show does come back for another season there will be some big changes. Wet Paint reports Caroline will no longer be part of the cast. She decided to fully concentrate on her spin off show “Manzo’d With Kids”. An insider told Wet Paint “The truth is Caroline’s storyline on the show has simply just come to an end. The show really and truly has become about the Gorgas and the Giudices. Whereas Caroline used to be a main player, her role has turned into more of an advisor this season. As far as RHoNJ goes, there’s just not a lot left for her to do, which is fine by her. She doesn’t want to be at the center of the drama and the ugliness anymore.”

Another possible change is the return of Caroline’s sister Dina Manzo. In Touch reported Dina has renewed interest in appearing on the show now that her estranged sister will be leaving. A source told the magazine “Dina Manzo’s return to the show is all but a done deal”. Dina left midway through season 2. Her reason was being uncomfortable filming a drama filled show, as well as wanting to get away from Danielle Staub. Radar Online suggests a reason for Dina’s return is that she is a close friend and supported of Tre and Juicy.

If the show does come back for another season it will probably focus mainly on Tre and Juicy’s legal troubles. The network may be restricted to what they can air, but with the magic of editing Bravo could make a very interesting story. The J-Lo wannabe will keep torturing us with her crappy music and ludicrous marriage advice. The Frisky did a review of Love Italian Style and it was not kind. The reviewer says Mel’s book promotes martial rape and having no identity of your own. Your only purpose in life is pleasing your husband. J-Lo Light was very upset by the backlash to her book and that people say she advocates martial rape. Mel told E! news “That word is so disgusting to me and that’s horrible. I don’t know how anyone can… My book is about mutual respect with your partner, for one another. It’s about honesty, it’s about loyalty, it’s about making your partner first in your life. Where that word comes into play, to me, is awful and disgusting, to be honest with you.”

Jacqueline will contiue her advocacy for Autism research. She doesn’t always bring much to the table but at least she has a cause to support. Teresa’s cousin Kathy Wakilie will of course keep plugging her cannoli business. Any other screen time her and her family get will be because Bravo has to put them on camera. They will find something mundane to film.

Bravo will have to make a decision soon about the fate of the show. Tre and Juicy’s trial will start in February 2014. If the Giudices are going to be included in the new season Bravo has to starting filming now. They probably won’t be able to film Tre and Joe during the trial.