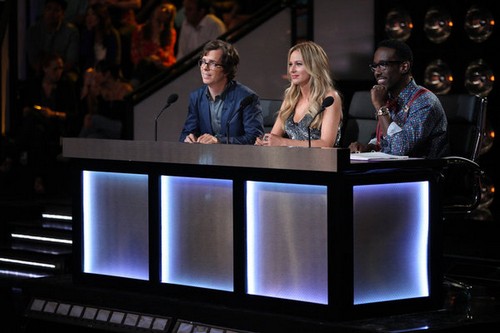 THE SING-OFF premiered on NBC with its 4th season this week and it showcased the country’s top cappella groups performing popular songs in ways that viewers have never heard them before.  This season Jewel will joined the judges table alongside Ben Folds (Ben Folds Five) and Shawn Stockman (Boyz II Men), who both returned. If you missed episode 2, we have a full and detailed recap, right here for you.

On last night’s show the nine remaining groups pump up the jams with party anthems and hope to win the judges over with their playful and upbeat tunes.  At the of the show at the bottom twowere AcoUstiKats and Calle Sol, who has to face off in the Ultimate Sing-Off.  The sing-off song was Kelly Clarkson’s “Stronger,” and Calle Sol was sent home.

On tonight’s show the eight remaining groups will search the charts for their favorite #1 hit to win over the judge’s approval. Starring: Nick Lachey, Jewel, Shawn Stockman and Ben Folds.

The Acoustikats will be singing next, and tonight they will be singing Lonestar’s hit song “Amazed.” Ben thinks that they bonded together nicely and loved Ross’s lead vocal. Jewel was a little worried when she heard they were singing this song, but she thinks they nailed it, and they are a great choral group. Shawn says it was an overall great performance but he expected a little more of a build-up at the end. Mike, one of the members of the Acoustikats calls his girlfriend Maggie up on the stage from the audience, and proposes to her. She says “Yes!”

Street Corner Renaissance is up next, they are performing CeeLo Green’s hit song “Forget You.” Ben thinks they did great, he wants them to “discover themselves” more. Jewel thinks that their performance was “really enjoyable,” and the song really fits them. She would love to see them “tighten their harmonies” a little. Shawn says that “they did their thing” and he is honored that they took his advice. He wants them to “stay in the game.”

It’s time for the final group of the night, The Filharmonics. Tonight they will be singing Maroon 5’s hit song “One More Night.” Shawn thinks that they have improved, and tonight was the “tightest they have other been.” He also loved their dance moves. Ben was not as excited about this performance as he has been in the past. Jewel liked that they “harmonized the bridge.” She thinks they could have adapted to the song a little better, it is supposed to be an angry song, but they were too light-hearted.

The judges have decided which two teams are up for elimination tonight. Ten and Acoustikats are safe. Street Corner Renaissance and the Filharmoniks are headed to the Sing-Off. They will both be singing “Na Na Hey Hey Kiss Him Good-bye” by Steam.

The judges have made a decision. The Filharmics are safe. Street Corner Renaissance has been eliminated from The Sing-Off.