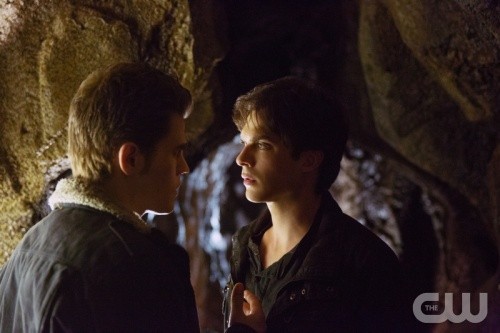 Tonight on the CW the THE VAMPIRE DIARIES returns with a whole new episode. Tonight’s episode is called “Stand by Me” and on tonight’s show when Stefan (Paul Wesley) arrives back in Mystic Falls with Elena (Nina Dobrev) and Jeremy (Steven R. McQueen), Caroline (Candice Accola) is immediately worried about Elena’s state of mind. Did you see last week’s episode? We did and we recapped it here for you.

On last week’s show on the island, Damon had an ugly run-in with a Hunter named Vaughn, and realized he is one of The Five. Stefan confessed his true feelings about the possibility of becoming human again to Elena. When a stunning new piece of information about the cure was suddenly revealed, it changed the stakes for everyone.  Jeremy helped Bonnie recognize what was real and what was an illusion, and Shane was comforted by a woman from his past, Caitlin. Back in Mystic Falls, Caroline and Tyler found that their attempt to translate the code on the Hunter’s Sword was futile without help from Klaus, who had his own reasons for solving the puzzle.

On tonight’s show – THE TERRIBLE TRUTH — When Stefan arrives back in Mystic Falls with Elena and Jeremy, Caroline is immediately worried about Elena’s state of mind. Stefan reaches out to Dr. Fell (guest star Torrey DeVitto) and Matt for help. Still on the island, Damon relays somber news to Rebekah, and is surprised at her reaction. 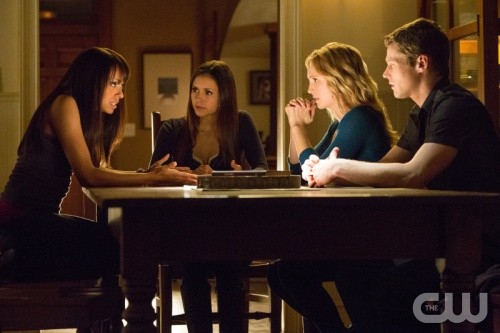 Together, Damon and Rebekah learn an unexpected bit of recent history from Vaughn (guest star Charlie Bewley). Everyone is horrified when Bonnie reveals the rest of Shane’s (guest star David Alpay) plan. Finally, after Damon does his best to help her, Elena comes up with a plan of her own. Lance Anderson directed the episode written by Julie Plec.

The Vampire Diaries Season 4 episode 15 “Stand by Me” airs at 8PM tonight on the CW and we will be live blogging it will all the up-to-the-minutes. So come back to this spot and spend the evening with us enjoying the show! Make sure to refresh often to get the most current update!

revive him. She promises to bring him back. Stefan tells Damon that Katherine was responsible for Jeremy’s injury. Turns out the ring won’t bring Jeremy back now that he’s gone all supernatural as a hunter – one of the five… Uh-oh, is he dead, dead?

Caroline is scrubbing the burn mark where Kol went up in flames when they bring Jeremy home. His ring is on, but as suspected, doesn’t seem to be working. Elena still thinks he’s going to wake up and sits waiting.

Meanwhile Bonnie is nowhere to be found and Katherine, Silas and the cure are gone. Damon’s out searching for Bonnie and gets a vamp tingle – it’s Rebekah. He tells her that Katherine killed Jeremy and took the cure and is gone. Rebekah wants to find Katherine, but Damon tells her she’s long gone. He also tells her to watch out for Silas.

Bonnie wakes up in the woods near a burning fire. Shane is with her and he treated her stab wound. He tells her that Silas healed him so he could save her. He promises Silas is going to bring back all the people who had to die to raise him. Shane said Silas had to feed when he rose and Jeremy was nearby and was sacrificed.

Stefan tells Caroline that Elena remains convinced Jeremy is going to wake up. He says she’s in denial but he doesn’t want to be the one to break her out of it. He says Damon can use the sire bond to convince her everything is okay. Elena comes in and says she’s not in denial. She thinks because the tattoo disappeared, he’s no longer a supe. She thinks it’s a slim hope, but will hang onto it. She says there’s no way her brother is dead. She walks out on them.

Caroline leaves Tyler a message – even though she’s not supposed to. Stefan asks where he is and she says he’s on the run from Klaus. Stefan tells her Katherine’s been running from him for 500 years successfully. He thinks she may want to use the cure as a bargaining chip with Klaus. Caroline leaves to tell her mom what happened and they agree they need to bring Matt over. Caroline smells something and Stefan tells her it’s Jeremy starting to decompose. He tells her to bring Dr. Fell also.

Still on the island, Rebekah and Damon continue their search for Bonnie. Vaughn shoots at them and then takes off, but Damon easily tackles him. He knocks him out.

Bonnie is crying and distraught. Shane tries to comfort her but she pushes him away and her magic starts to go out of control. He tells her she has to help Silas so he can bring Jeremy back.

Dr. Fell comes to check on Jeremy and Elena tells her how Alaric would not have any vitals when he died before he revived. The doc tells her he died of extreme blood loss and a broken neck – she tells her that he’s well and truly dead. Elena won’t hear it but Dr. Fell tells her to release the body to her for a burial. Elena tells her it’s not science he needs, but magic. She’s freaking out when Matt shows up. Matt is instantly crushed and Elena goes to him and tells him it will be fine – that Bonnie will be able to fix it.

[8:39:50 PM] Rachel Rowan: Elena fills Matt in on what happened on the island and Damon’s search for Bonnie. He asks her to come with him since there’s nothing she can do right now anyway.

Damon holds Vaughn at knifepoint and demands information. Vaughn says he can’t kill him or else he’ll get the hunters curse. Rebekah tells him they can tear him limb from limb, heal him, then do it all over again. He caves and says he tracked Katherine and found out it was Haley (Shane’s old werewolf sidekick) that gave them the 411 on Silas.

Shane tells Bonnie he’s been training her all along to help Silas. He tells her they just need one more massacre to complete the triple effect they need to resurrect everyone. She refuses and runs away and trips over Jeremy who begs her to help him. She realizes it’s a hallucination as Shane walks up. He tells her that Jeremy needs her help and that killing the people won’t matter since they’ll come back. She agrees to do whatever it takes.

Dr. Fell cranks down the AC to try to slow the decomposition. Stefan tells her that over the centuries, after all the people he’s seen die, it doesn’t get any easier. The doc agrees. Stefan gets a call from Damon and he tells him Elena is losing it.
Damon said he can’t show up without Bonnie and Stefan tells him they need him there to use the sire bond to help Elena and he says he’s on the way. But then Bonnie shows up and they actually hug. She tells him she knows how to bring Jeremy back – she says Shane led her to Damon and told her what needs to be done.

Matt brings Elena to the “stoner pit” to show her something. There’s a graffiti tag there that Jeremy had done of Vikki’s name and then another that says J+V. He said after they found her body, it didn’t feel over and it turned out, it wasn’t. Matt said not being able to accept when someone’s gone in Mystic Falls, is that it often isn’t over. He tells her it’s okay to have hope and sometimes that’s all that keeps him going. She thanks him and then gets a call from Stefan telling her Damon found Bonnie and they’ll be home in a few hours. Stefan says Bonnie may know something that can help Jeremy.

Vaughn tells Rebekah that Silas is out and about and she should be careful. He has Silas’ faceplate that was disguising his face, so they don’t even know what he looks like. Vaughn says it could even be him. He tells her to use the cure to kill him or they’ll all be dead. She takes off.

Caroline calls Tyler again and leaves another message. She tells him things are looking bleak. Bonnie shows up with Damon. Flashback to the island where Shane tells Bonnie what needs to be done. Bonnie tells Matt, Stefan, Damon, Elena and Caroline that she has to kill 12 people.

Qetsiyah created the “other side” to house the spirits of supernaturals and the veil must be dropped to release them all. Shane tells her that her Grams, Jeremy and all of the cursed supernaturals will come back. Caroline tells her she’s crazy for thinking about inviting all the monsters back in. Bonnie insists that she has enough power to do it. The phone rings, breaking up the argument. It’s April calling for Jeremy. Elena tells her he’s dead. She hangs up on the call and walks out.

he’s not enough. They make their peace. Elena looks at Jeremy’s body on the sofa and lights a match. Damon asks her not to do it. He tells her they can find another cover story. She says it’s the best option. Stefan asks her what happens if one day she wants to come home again. She says she won’t and throws the match. They leave as the house goes up in flames.
Stefan looks back as it burns –is he seeing the last remnants of his life with Elena going up in flames as well? Jeremy begins to burn, as do Elena’s diaries, Jeremy’s sketches and all vestiges of their life and family.