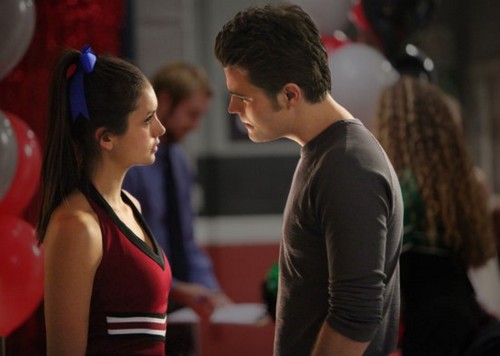 Waiting sure sucks!  After a three week hiatus our favorite show THE VAMPIRE DIARIES finally returns with a new episode.  Pull up your chair and get ready because Damon, Stefan, Elena and the gang are back.  On tonight’s show not giving up on their search for the cure, Damon and Rebekah (Claire Holt) work together until his unwanted advice catches her off-guard.  Did you watch the last show before the break?  We did, and you can get up to date before tonight’s show, here!

On the last episode when Stefan arrived back in Mystic Falls with Elena and Jeremy, Caroline was immediately worried about Elena’s state of mind. Stefan reached out to Dr. Fell and Matt for help. Still on the island, Damon relayed somber news to Rebekah, and was surprised at her reaction. Together, Damon and Rebekah learedn an unexpected bit of recent history from Vaughn. Everyone was horrified when Bonnie revealed the rest of Shane’s plan. Finally, after Damon did his best to help her, Elena came up with a plan of her own.

On tonight’s show Elena’s new outlook has everyone concerned, leading Stefan and Damon to agree that going back to the normal routine of high school would be the best thing for her. Caroline is pleasantly surprised when Elena decides to rejoin the cheerleading squad, but her pleasure turns to shock when Elena’s behavior proves dangerous. Not giving up on their search for the cure, Damon and Rebekah work together until his unwanted advice catches her off-guard. 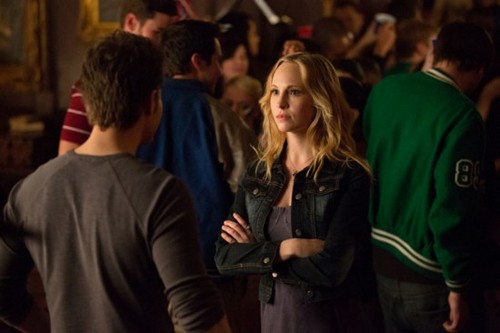 Klaus tries to use Hayley (guest star Phoebe Tonkin) to get the information he’s after and makes an intriguing discovery in the process. Meanwhile, a bored Elena throws a wild party and gets into an ugly fight. Jesse Warn directed the episode written by Elisabeth R. Finch & Michael Narducci.

The Vampire Diaries Season 4 episode 16 “Bring it On” airs at 8PM tonight on the CW and we will be live blogging it will all the up-to-the-minutes. So come back to this spot and spend the evening with us enjoying the show! Make sure to refresh often to get the most current update!

Tonight’s show opens with Elena walking down a road in the night time and she lies in the middle of the road.

Stefan tells Damon that they are going to lose Elena because her humanity is off.  Stefan is concerned because Elena burned down her family home with Jeremy in it.  Damon’s idea is to show Elena a good time.  Good old Damon!

Meanwhile a women stops her car and comes over and asks Elena if she is okay.  Elena tells her she does not feel anything, the women says she will get a blanket for Elena.  Elena turns around and feeds off the women.  Damon runs over and tells Elena to show a little restraint.  She replies, “I thought this was suppose to be fun,” as blood pours down her face.

A vampire goes to attack Haley and Klaus intervenes and bites the vampire. (not good) Klaus tells Haley she is lucky if Katrina lets her live now that she has what she wants.  Klaus wants to know everything she knows about Katrina (Doppelganger).

Caroline gets out of the shower.  Stefan tells Damon to go look for Katherine.Stefan and Caroline are going to take Elena back to school.

Damon tells Elena to go to school, study hard and not eat anyone, he tries to use the sire bond to get her to be good.

Back at Mystic High Elena sees a sign for a memorial for Jeremy.  Caroline calls Tyler and leaves another message.  Caroline tells Matt that Bonnie is fine she is drained and resting.  Elena comes over to Caroline and asks Caroline to get her place back on the cheer leading squad.

Damon visits Klaus – he tells him he came up with a list things Klaus sucks at.  Damon asks Klaus where she (Haley) is and what she told him about Katherine.  Damon tells Klaus Katherine has the cure.  Damon wants to question Haley about Katrina.

The Sheriff tells Stefan that all the blood at the hospital has disappeared.  The Sheriff wants to know who could need blood so bad.

Back at Mystic High the cheerleader squad is working out.  Elena finds her cheer leading outfit is a perfect fit.  One of the other team’s cheerleaders leaves the gym to get her makeup bag.  Elena follows her and tells her she wants her ribbon, the girl refuses and Elena bites her.

Elena show up back up in the gym and she has the girl’s ribbon in her hair.  Caroline looks and sees the other team’s cheerleader with a scarf around her neck.  Caroline puts 2 and 2 together and figures out Elena bit her and asks Elena if she nuts?  Elena tells Caroline she will feed on who she wants.

Stefan calls Damon and tells him that the sire bond is not working, Elena is feeding off who she wants.

Damon tells Stefan he is at a truck stop looking for a 1/2 dead vampire who may lead him to Katherine.  Rebekah shows up, she wants to know where Katherine is.

Haley and Klaus are having dinner. Klaus wants to know where Katherine is.  He is sure she knows because she was the one who tipped Katherine off about the cure.  Haley tells Klaus that Katherine offered to help her find her parents.  Klaus tells her he can protect her against Katherine’s henchmen.  Now that Katherine has what she wants she will try to kill Haley.

Stefan comes and asks Elena if she stole the hospital’s blood bags.  She tells him she likes warmer blood.

Stefan tells Elena that the gym is far too private they have to go somewhere else for fun.  Elena thinks he is bluffing.  She comes over and Stefan stabs her with a vervain syringe.

Damon and Rebekah head to the hospital and the blood bank is empty. Damon is looking for the Vampire Klaus bit.  Rebekah wonders why Damon would want to find the cure.  If Elena is cured Rebekah tells him she will want Stefan again.

Haley and Klaus are speaking and Haley accuses Klaus of hunting Tyler, but Haley says she knows Klaus won’t kill Tyler because Caroline won’t forgive him.  Klaus suspects Haley has a thing for Tyler.  Haley tells Klaus the way to survive is to have helpers who help you.  Klaus wants to know Katherine’s helpers.

Elena wakes up and she asks why Stefan brought her back.  He tells her because she fed on someone in public.  Elena says, “so what.” She starts to strip in front of him, again.  She tells Stefan she remembers sex with him, it was good, but she is not interested in him anymore.  Elena tells him his whole world revolves around him and he needs to turn it off.

Stefan hears noise and he goes downstairs and he finds out that Elena invited tons of people to his house.  Elena tells him if she cannot go to the party she brought the party to her.

There is a huge party at Stefan’s house – everyone is getting drunk.  Elena is having a grand time.  Caroline watches Elena dance and asks Stefan if watching Elena makes him want to let loose.

Damon is feeding off a girl and then he compels her and sends her back to her car.  Damon has set up a trap for the sick vampire.  He figures the sick vampire will be looking for blood.  As predicted the vampire walks over and Damon recognizes him, it is Will.  He tells Damon he thinks there is something wrong with him and he needs help.  Damon says he will help him and then he rips the vampire’s heart out.  Damon tells Rebekah he was too far gone to save.

Haley is trying to seduce Klaus and it looks like it is working.  The two embrace, kiss and start to have hot werewolf sex.

Meanwhile Elena is still partying like it is 1999 and she spies Caroline and Stefan dancing and comes over.  Caroline ask Elena to dance with them.  Elena tells Caroline to take Stefan out for a spin.  The Sheriff comes in and asks Elena what is happening, she threatens to stop the party.  Elena bangs her into the wall and Caroline comes over to help her Mom, the sheriff.  Caroline tells Stefan she is going to wring Elena’s skinny neck.

Elena ran away as Stefan and Caroline took care of Caroline’s Mom.  Stefan tells Caroline, Elena did just what she wanted, distracted them.

Damon gets an e-mail that  says Elena is AWOL.

Caroline is walking in the woods and she screams to Elena that she is stronger and can hurt her.  Elena comes out of the forest and attacks Caroline.  Caroline tells her to stop – she tries to make Elena guilty for hurting her Mother.  Nothing works, Caroline fights with Elena as Elena taunts Caroline about how she whines for Tyler, but really wants Klaus.  Elena almost overpowers her and stakes Caroline but Damon and Stefan show up and stop her.

Caroline calls Tyler and tells him she had a crazy day.  Meanwhile, she gets a text from Matt asking Caroline to meet her at Tyler’s house.  Caroline is upset because Elena tried to kill her.  Caroline cannot see Elena wanting to come back now.  Stefan tells Caroline not to give up on her.  Elena never gave up on Stefan, even when he was at his worst.

Damon is going through papers and Elena wants to know when she can leave.  She comes over to see what Damon is looking at and it is a picture of Damon and Will.  She asks him what it is and Damon tells her it is one of life’s many mysteries.

Caroline tells Matt, Tyler is never coming back as she breaks down and sobs.

Haley is getting dressed and Klaus notices a mark on her back.  He tells her he has only seen that mark on a werewolf clan in Louisiana.  Haley tells him not to lie to her.  He swears he is not.

Sheriff Forbes calls Stefan and tells him they have a big problem.  Stefan calls Damon and tells him that blood is missing from 6 other blood banks and he thinks that the 1000-year-old vampire (Silas) is back from the island and is building a blood store because he is hungry.

Damon tells him he is going somewhere and they can discuss when he gets back.  Meanwhile Damon and Elena are driving in the car and are on the way to NYC.

Wanna know about next week’s episode?  We have some juicy spoilers and a sneak peek video HERE!