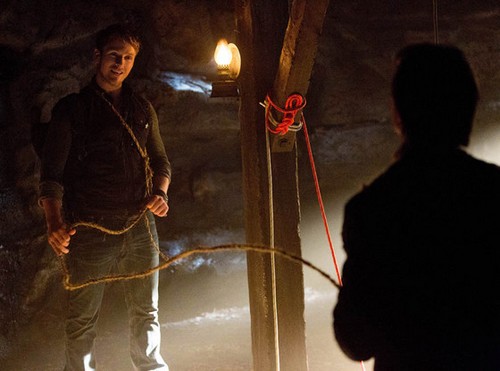 THE VAMPIRE DIARIES is really heating up and we cannot wait until next week, tonight’s episode was set in Nova Scotia where I was born and the scenery was great.  This season OF TVD just keeps getting better and better!  From the preview we have seen, next week’s episode of The Vampire Diaries called “Down The Rabbit Hole,” is going to be intense and, as usual, we will be providing you with the juiciest, bloodiest, previews and teasers out there.  We managed to get our hands on a juicy spoiler for next week’s episode and it looks like Damon is going to get attacked by a vampire hunter.  Check out the sneak peek video of next week’s episode below.

On tonight’s show  Professor Shane leds the team to a small island off the coast of Nova Scotia. While there, they hunted for the cure, but craziness ensued. Doesn’t it always? As everyone made their way deeper into the island, Rebekah and Elena continued their hate-hate relationship, Stefan continued his sulkiness, Damon accused Shane of leading everyone into a trap, and ex-lovers-but-probably-still-in-love-friends Jeremy and Bonnie attempted to interpret the Hunter’s mark.  Did you watch tonight’s episode?  We do and we recapped it here for YOU!

Spoiler alert: If you’re one of those people who doesn’t like spoilers, stop reading now! We have some juicy spoilers for you about the season 4 episode 14 of CW’s “The Vampires Diary.”

CW Official Synopsis: CHARLIE BEWLEY FROM “TWILIGHT” GUEST STARS AS ONE OF THE FIVE HUNTERS — On the island, Damon (Ian Somerhalder) has an ugly run-in with a Hunter named Vaughn (guest star Bewley), and realizes he is one of The Five. Stefan (Paul Wesley) confesses his true feelings about the possibility of becoming human again to Elena (Nina Dobrev). When a stunning new piece of information about the cure is suddenly revealed, it changes the stakes for everyone. Jeremy (Steven R. McQueen) helps Bonnie (Kat Graham) recognize what is real and what is an illusion, and Shane (guest star David Alpay) is comforted by a woman from his past, Caitlin (guest star Camille Guaty, “Prison Break”). Back in Mystic Falls, Caroline (Candice Accola) and Tyler (Michael Trevino) find that their attempt to translate the code on the Hunter’s Sword is futile without help from Klaus (Joseph Morgan), who has his own reasons for solving the puzzle. Claire Holt also stars. The episode was directed by Chris Grismer and written by Jose Molina.

On next week’s show Stefan tells Elena that everyone is on the island because they want to be.  Everyone is looking for the cure.  Meanwhile Shane is planning to raise the most powerful immortal creature there ever was and it looks like he tells Bonnie.  Meanwhile Jeremy enlists Bonnie’s help and get her take his hand and he will get them there.  Bonnie is having problems telling what is real and what is an illusion and Jeremy can help.

Vaughn one of Five (photo below), lets a bloodied Damon know that his friends will be the end of him.  But Damon is not letting that bother him and tells Vaughn he does not know his friends.  Meanwhile Vaughn is holding a gun on Damon.

The Vampire Diaries Season 4, Episode 14 “Down The Rabbit Hole” airs on the CW on February 14th, 2013. Check out the preview video  & some photos from episode 14 and let us know in the comments below what you think!