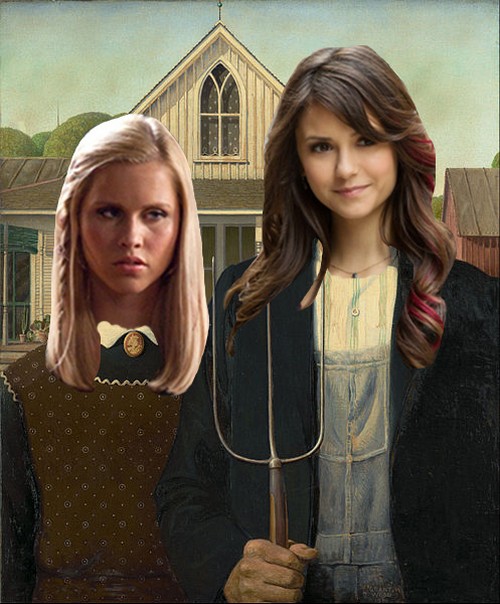 Tonight’s The Vampire Diaries returned to the CW and it was bloody fantastic.  Damon took Elena to NYC and he told her they can have fun there because the city is so big, no one will notice them.  Bonnie completed the spell tonight and Cylus has all he needs now except the cure, which he wants Klaus to get for him.  I cannot wait until next week’s episode to see how that plays out.  We as usual, have some juicy spoilers and a sneak peek video for your enjoyment below!

On tonight’s show realizing that Elena needs some time away from Mystic Falls, Damon took her to New York City, where he lived and partied hard in the 1970s. He also had an ulterior motive Will the vampire that Klaus bit last week was from NYC and Damon wanted to do a little research.  When Rebekah also showed up in New York, she was impressed with Elena’s secret agenda. Flashbacks revealed Damon’s hedonistic life in the underground club scene and a complicated encounter with Lexi. Meanwhile, Caroline and Stefan try to convince Klaus that it would be in his own best interest to help them track Silas down.  Bonnie struggled to keep her grasp on reality and do the right thing.  Shane tried to convince Bonnie that it was a good idea to kill 12 people, because she can bring them back.  Did you watch tonight’s episode?  We did and we recapped it here for you!

Spoiler alert: If you’re one of those people who doesn’t like spoilers, stop reading now! We have some juicy spoilers for you about the season 4 episode 18 of CW’s “The Vampires Diary.”

Official CW Synopsis: Elena (Nina Dobrev) and Rebekah (Claire Holt) take off in search of Katherine  (also played by Nina Dobrev) and find themselves in a small town in Pennsylvania, where Elena has a surprising encounter with another old acquaintance — Elijah (guest star Daniel Gillies). Stefan (Paul Wesley) and Damon (Ian Somerhalder) are both concerned about Elena’s state of mind and are determined to do what’s best for her, but she makes it clear that helping her will be difficult. Damon is not sure how to react when Stefan reveals his unexpected plan for the future. Meanwhile, in Mystic Falls, Klaus (Joseph Morgan) receives Caroline’s (Candice Accola) reluctant help and comes to a new understanding of Silas’ powers. Kellie Cyrus directed the episode written by Evan Bleiweiss & Jose Molina (#418).

On next week’s show the search for Katherine continues, she has the cure.  Surprisingly Elena and Rebekah put their differences aside and teamed up to find Katerine, but it is not Katherine they find first it is Elijah in a small town in Pennsylvania.

However Elena does find Katherine and the game is on!  She tells Katherine to give her the cure NOW and Katherine responds, “Like that is going to happen.”  This is not going to be as easy as Elena thought.  It also appears like the gloves are off and we are going to have a fight between Elena and Katherine.   Lets not forget that Rebekah, Elena’s new BFF is there to help.  So it looks like we might have a winner, as Damon says.

Stefan is surprised because Damon is determined that Elena get the cure NO matter what.  Damon always said that Elena should embrace her inner vampire, but it seems he has changed his mind.  As a matter of fact he tells Stefan, ” The  guy that wanted that got his neck snapped in New York.”

I cannot wait till next week!  Will Klaus help Silas/Shane find the cure?  Will Bonnie remember she killed the witches and how is she going to feel about Jeremy being dead?

I like Elena and Rebekah has BFF, how do you like the new relationship?  Hit the comments and let us know what you thought of tonight’s episode and what you want to happen next week!

The Vampire Diaries Season 4, Episode 18 “American Gothic” airs on the CW on March 28st, 2013. Check out the preview video & some photos from episode 18 and let us know in the comments below what you think!