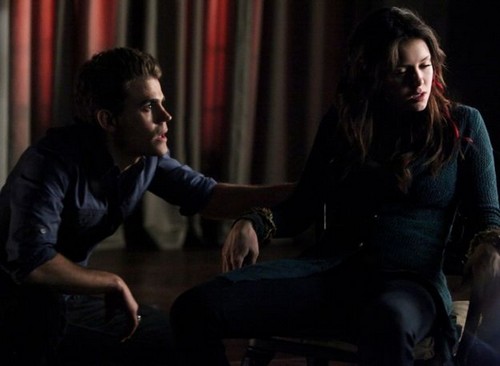 Tonight’s episode of THE VAMPIRE DIARIES was great, we got to see a pilot for a possible spin-off where we could get a  weekly dose of  Mikaelson family drama.    Next week’s episode is called, “She’s Come Undone” and it suppose to be an episode worth waiting for.  While you wait for next week’s episode, as usual, we have some juicy spoilers and a sneak peek video for your enjoyment below!

On tonight’s show what an episode, where do I start?  If this is a taste of the spin-off I am definitely watching.  Most of tonight’s how was set in New Orleans and dealt with the Mikaelson family.  Klaus comes to town because he has gotten a tip there is a plot against him and he wants to find out what it is.  Klaus meets an old protégé of his, Marcel.  Klaus soon learns that Marcel runs the town, controls the witches and as he tells Klaus, he is KING!  Klaus does not take this well.  Meanwhile, we met a new witch tonight, Sophie Devereaux.  In shocking news tonight we found out that Klaus is going to be a daddy.  Yep vampires cannot have babies, but werewolves can.  Head over to our recap to find out how that happened.  We watched tonight’s episode and we recapped it here for you!

Spoiler alert: If you’re one of those people who doesn’t like spoilers, stop reading now! We have some juicy spoilers for you about the season 4 episode 21 of CW’s “The Vampires Diary.”

Official CW Synopsis: LET’S MAKE A DEAL — Damon (Ian Somerhalder) and Stefan (Paul Wesley) try a brutal new approach to provoke Elena (Nina Dobrev) into turning her humanity back on, and Caroline (Candice Accola) is frustrated when her attempt to intervene backfires. When Elena figures out a way to call the Salvatore brothers’ bluff, they call for backup from a surprising source. Matt (Zach Roerig) gives Rebekah (Claire Holt) some unsolicited advice on her life choices, and she tries to help him in return. Caroline has a confusing and dangerous encounter with Klaus (Joseph Morgan), and Katherine (Nina Dobrev) is suspicious when Bonnie (Kat Graham) makes her an offer that she promises will benefit them both. Darnell Martin directed the episode written by Michael Narducci & Rebecca Sonnenshine.

On next week’s show Damon and Stefan decide to torture Elena to get her humanity back and make her feel something.  Stefan tells Caroline and she is shocked they are going to torture Elena.   They burn her with daylight, they feed her vervain, but it is not working.  Elena knows the boys are not really going to hurt her.   Damon is frustrated he feels the girl they knew is right there and he is not stopping until they get her back.

Damon realizes the one thing Elena probably could not stand is if something happen to Matt.   We know Stephen would not go that far, but Damon is a completely different story.   From the pictures released it looks like Matt is in the torture room too and the Salvatore boys may have to take more extreme action to get through to Elena.    According to TVGuide, “Damon will put one of Elena’s friends in extreme (aka life-or-death) danger in order to get some emotion — maybe even tears! —out of her.”  I am really hoping they do not decide to kill Matt off, we already lost Jeremy this season.

We know Klaus has a thing for Caroline, especially after this week’s show when he called her and told her he wanted to show her New Orleans.  But it looks like Klaus is really angry at Caroline this week, wonder what is up with that?  The promos says she has a, “confusing and dangerous encounter with Klaus.”  Does that mean she is confused about how she feels about him?  How could that be dangerous?  So many questions until next week!

The Vampire Diaries Season 4, Episode 21“She’s Come Undone” airs on the CW on May 2nd, 2013. Check out the preview video & some photos from episode 21 and let us know in the comments below what you think!