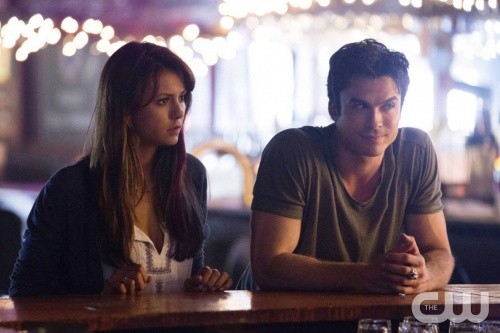 Tonight’s The Vampire Diaries returned to the CW and it is still going strong.  This season is shaping up to be huge, new characters and new villains.  I just cannot wait until the next episode, while you wait for next week’s episode, as usual, we have some juicy spoilers and a sneak peek video of “For Whom the Bell Tolls” for your enjoyment below!

On tonight’s show Elena and Katherine have the same dream that Stefan is in danger and desperately needed their help, they convinced Damon to help them find Stefan. However, their plans are thwarted by a mysterious young woman named Tessa who seems to know everything about Stefan’s history. In flashbacks to a distant time and place, Tessa revealed the shocking secrets in her past and what she has planned for the future. She also had a disturbing message for Damon about his own future. Silas forced an unwilling accomplice, Qetsiyah to help him search for Katherine, leading to a confusing and life-threatening situation for Matt. Finally, Silas revealed the reason he’s determined to find Katherine.  Damon and Elena faced a disturbing new reality that they are not destined to be together.  Did you watch tonight’s episode?  We did and we recapped it here for you!

Spoiler alert: If you’re one of those people who doesn’t like spoilers, stop reading now! We have some juicy spoilers for you about the season 5 episode 4 of CW’s “The Vampires Diary.”

On next week’s show it is Remembrance Day and that means someone could show up who has died.   Last season Alaric Saltzman came back, I wonder who will be back this season.  So get your tissues out,  this is usually a tear-jerker episode.

Meanwhile Caroline will also get closer to Jesse.  Remember Tyler left her in tears so she might be looking to move on.

It looks like Jeremy lets the cat out of the bag and lets Damon know that Bonnie sacrificed her life for his and is dead.

On tonight’s show Damon was told that his romance with Elena would never last because the Doppelgangers are destined to be together.  Next week the universe manages to get the doppelgangers to meet and it looks like it is going to be hot.  Old flames unite as Stefan who has lost his memory meets Katherine.  It also looks like Stefan and Damon get into a car crash.

The Vampire Diaries Season 5, Episode 4 “For Whom the Bell Tolls” airs on the CW on October 24th, 2013. Check out the preview video & some photos from episode 4 and let us know in the comments below what you think!