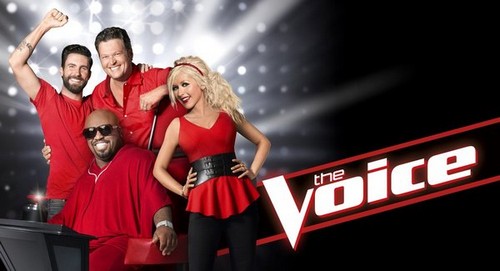 THE VOICE is one of our favorite singing reality competitions because the judges – definitely have a good time and are even quite funny. Tonight, The Voice season 5 will be returning for Part 5 of the Blind Auditions. Cee Lo Green, Blake Shelton, Christina Aguilera, and Adam Levine will all be fighting furiously to make sure they win over the best singers to represent them this season.

While this is a competition for singers hoping to make a name for themselves in the industry, let’s not forget the fact that these judges WANT their teams to win.  There was some amazing talent on last week’s episode. In case you missed it, check out our LIVE RECAP — CLICK HERE.

Tonight’s  The Voice “The Blind Auditions, Part 5”  is going to be an exciting one, which you won’t want to miss. So be sure to tune in for our live coverage of NBC’s The Voice – tonight at 8 PM EST!   While you wait for our recap, hit the comments and let us know how excited you are about the new season of The Voice.

RECAP: Kicking off the final blind auditions for this season is a returning singer named Matt Cermanski; last time he sang but the judges weren’t a big fan of his song choice. He’s been working on finding his genre since last year and has been playing gigs; he’s been singing for years. Matt is singing “Have A little Faith In Me”. Adam hits his button right away. Blake then hits his button. CeeLo even hits his button and turns around for Matt.

Adam remembers him from last year and comments on his weird song choice last year; but knows that he will be on his team. CeeLo said he sounded great and liked him a lot; Blake then mentions his performance made him excited. Matt chooses Adam to be his coach.
Adam gets up and hugs Matt saying he is awesome.

Next up is Diego Naivara and he grew up into a family of musicians; his dad is a singer and has won two Grammy’s. His father is his biggest influence and wants to make him proud; Diego is a rocker at heart and wants to do some big things of his own. None of the judges turn.

Adam says that he has one spot left and had to be super picky; Blake is so shocked CeeLo didn’t turn. Blake says he was really good; Christina says that she could feel the energy even though she couldn’t see him. They thank him and Diego leaves the stage; Blake shakes his hand and tells him he is very good.

Next up is Tamara Chaunice and being in the church all the time she grew a love and passion for singing; when she was 11 she recorded her own album. When she turned 18 it wasn’t going to well and started drifting from music but now she is ready to come back and have a career doing what she loves. Right in the beginning of the song Christina hits her button. CeeLo even turns around.

Adam calls her very beautiful and it matches her voice; CeeLo says it was gorgeous and just enough to perfect the song. Christina says that she is very impressed with her voice. CeeLo is being a little flirtatious and wants to work with her. Christina says she wants to win with her. Tamara chooses CeeLo to be her coach. CeeLo gets up and gives Tamara a hug.

Next up is Brandon Chase and is very driven towards his passion for music; he graduated college at 17 years-old. He plays as many venues as possible but he doesn’t get paid much, he has excelled in many things but music is what he truly wants to do with his life. Brandon is singing “Wanted”. Blake hits his button and turns. CeeLo hits his button and turns as well.

CeeLo says he wants him on his team; loving his voice and style of singing. Blake asks if he wants to be a country singer; he believes it was the real deal and heard his country singing. Brandon chooses Blake to be his coach.

Next up is Lupe Carroll and has been delivering flowers for a long time, he enjoys it because of the smile on peoples faces when they recieve the flowers. Lupe wants to make his wife proud, she means everything to him. Lupe sings “If I Were a Carpenter”

CeeLo hits his button and turns for Lupe. Lupe automatically goes with CeeLo as his coach.

Next up is Grey and she has been singing since she could talk; she is working with a wedding band but it’s not what she wants to do for the rest of her life. She wants to become a professional singer, it’s her life time dream and is prepared to achieve it. Grey is singing “Catch My Breath” Adam hits his button to turn for her. CeeLo hits his button at the end.

Blake’s chair turned him around on weirdly right when Christina turned; Blake says his heart pounding and believes her voice can win this thing without a doubt. CeeLo says her voice was very plain and simple; it just warmed him up. Christina says that the cool thing about her is that as the song went on she kept getting better. Adam says that she got bigger and better as the pressure went on; he would be glad to steal her from the others.

Grey then says that she is going to choose Adam as her coach; Adam has a full team.

Next up is Dominic Scott Kay, he’s been singing since he was young. He did a movie when he was 4 years old and has even been in Pirates of the Caribbean. His father was on tour being the drummer for The Commodores; but is there to support him and he wants to make his father proud. Dominic is singing “Easy”.

Nobody turns for Dominic and they coaches are impressed to hear he is only 17. They admit they were all really close to wanting to turn; but they hesitated. Blake says he has to keep the nasally sound down a bit but over all he is impressed by him.

Next up is Michael Lynch and he does pop with a mixture of Latin music. He will be singing a song that has Spanish lyrics and wants to show the coaches his diversity; he went to Mexico City for school. He’s ready to make his big break. Michael is singing “Bailamos”. Christina hits her button and turns. Blake hits his button and so does CeeLo.

Blake says his pitch is so amazing; he loves his rhythm and that he has a cool vest. Christina questions if he can speak Spanish and he speaks it; she loves how he completely grasped her. CeeLo speaks Spanish with Michael and tells him that they can win for sure.

Michael chooses Christina to be his coach. Christina and Michael do a little duet on stage and dance a bit. Michael is Christina’s last person to now have her team full.

Next up is Deanna Johnson and she is from Georgia, she is a country girl who loves pop and R&B music. She has never sang in front of this many people and feels nervous; it’s the opportunity she needs to achieve her dream. Nobody turns for her.

Adam says that it was very different; his team is full and there were some strange things but he believes she was amazing. Christina says that she was struck at her gentle voice.CeeLo believes her distinct voice is amazing. Blake says to come back and dominate next year; her voice is just so incredible.

Up next is Brian Pounds and he is a soul singer; his family was full of athletic people and he was playing baseball. But when he played the guitar he was captivated by music; he sang in bars and wrote every day. Blake hits his button making Brian his last man to give him a full team. CeeLo hits his button near the end.

Blake says he has a great clear and amazing pitched voice; he believes he can her him perfectly. Christina says that CeeLo has a way of taking an artist and experiment with them; Blake says that he doesn’t want him to experimented on. Blake says he’s a country singer and he should stick to his roots. Brian chooses Blake to be his coach. Blake now has his team of 12.

Next up is a complication of artists who just impresses CeeLo enough to turn around.

The next up is Shawn Smith and he is from New York; he’s a bartender and a singer. He is a veteran having served in the army; he has lost 85% hearing from his right ear from an explosion. CeeLo hits his button and turns for Shawn.

Shawn talks about being a veteran and played guitar all the time for his fellow troops; CeeLo says that he was the last spot of the season. Shawn is excited and says he will not disappoint CeeLo; Blake says that he wish he could have turned.