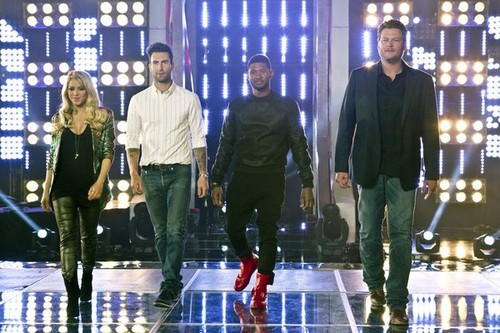 THE VOICE returns to NBC tonight with a whole new episode. On tonight’s show your votes will decide which of the remaining singers will move on.  Did you watch last week’s episodes? We did and we recapped, NIGHT 1 and NIGHT 2.

On last week’s shows we saw the “knockout rounds” with coaches Adam Levine, Blake Shelton, Shakira and Usher’s eight strongest team members remaining from the battle rounds. In the Knockout round of the competition the coaches pitted two of their own team members against each other, but this time they found out only minutes before performing who they are up against. The artists each selected their own song to perform individually, while their direct competitor watched and waited. Their coach had to choose the winner and that artist proceeded to the live shows.

On tonight’s show the top 16 artists perform live in front of celebrity coaches Adam Levine, Blake Shelton, Shakira and Usher for America’s vote.  Your votes will decide which of the remaining singers will move on.

Tonight’s  The Voice “Season 4  The Live Play-Offs, Part 1”  is going to be an exciting one, which you won’t want to miss. So be sure to tune in for our live coverage of NBC’s The Voice – tonight at 8PM EST!   While you wait for our recap, hit the comments and let us know how excited you are for the new season of The Voice.

RECAP: The pressure is on, this is a dream and only one artist will win it all. Team Usher is first and he has them all in the boxing ring for a tough workout, they are singing and working out at the same time. It’s all about discipline and team Usher got their dose. It’s time for team Usher to perform and all four of them are on stage.

Team Adam’s Amber Carrington is next and she is singing “Stay”, it’s a tough song, she has to sing it from her soul and Adam thinks if she can pull this one off then she can do anything.

Blake thinks it will suck to follow Amber as she set the bar really high. Usher thinks the audience had an intimate experience with her voice. Shakira is such a fan of Amber and thinks she has a lot to offer in this competition. Adam says that Amber had him in every second of that performance and she really could not have done a better job.

Team Usher’s Josiah Hawley is up next and he finds his thought process when approaching this song is completely different now since working with Usher. Josiah is singing “Starlight”.

Shakira thinks Josiah rocked it and this is his best performance so far, she is finally getting to know the real him. Adam thinks it was a real tough song and wants to praise Usher for the way he coached him, he has made leaps and bounds. Blake thinks the performance was haunting and energetic, the world may lose a model and Blake says that he might have to step in. Usher calls Josiah an entertainer, it was an opportunity to show who he is and Usher thinks he is a rock star.

Team Adam’s Sarah Simmons is next and Adam thinks he has picked the best song for her, “In The Arms Of An Angel”. Sarah is going to try and channel her emotions in this song as she thinks about a friend who died in a tragic accident.

Blake has been telling Sarah that she is one of his favorite singers and that was so amazing and beautiful. Usher thought that was a very complicated song and she did very well with it. Shakira says incredible. Adam says he has never heard the room so quiet, the stillness because everyone was just so enamoured.

Usher stole Cathia in the Battle Rounds and this really ave her the power to go on. Usher has chosen for Cathia to sing “I Have Nothing” by the legendary Whitney Houston.

Shakira, Cathia’s former coach is still routing for her but she found the song too high for her, she was stepping on holy ground. Blake thought it was really good. Usher thinks that it is times like this that make it or break it, he doesn’t think it was an incredible performance, but he does think she can take it right to the top.

Adam and Usher give us a special performance, the two sing “Superstitious”.

Next we see an artists that Adam stole from Blake, Caroline Glaser. Music has always been her passion and Caroline dropped out of University to be on the show. Caroline is signing “The A Team”.

Blake loved it, he didn’t know the song but he just enjoyed what he heard from Caroline. Usher found it was soothing, great and he felt she was really relaxed with a lot of control. Adam thinks Caroline is a power house vocalist and did an amazing job with her unique sound.

Veto is up next from team Usher and he feels like he has grown as a person since being on the show. Usher has picked for him to sing “Against All Odds” by Phil Collins, one of my favorite songs.

Shakira thought the audience loved him. Adam doesn’t like one thing about Veto, that he is not on his team. Usher thinks this was kind of hill for Veto and he is 100 percent impressed with his performance.

Team Adam is preparing for their big group performance, they are singing “Take It Out”.

Team Usher’s Michelle Chamuel is next and Usher has given her “True Colors” to sing, he thinks it is beautiful for her.

Shakira was watching the performance intently and feels like Michelle did show her true colors. Adam says this performance was a break out and he has been a believer forever. Blake says Adam stole the words out of his mouth and he loved that she made the song about her. Usher agrees that that was a break out moment and tonight Michelle made a connection with the world that they will never forget.

Before The Voice, team Adam’s Judith Hill was known as Michael Jackson’s background singer but now she has an opportunity to knock it out of the park. Judith is singing “Feeling Good”.

Usher wonders why he didn’t fight harder, he thinks Judith came out and took them to church. Adam says that there is not much he can say because everyone loves her and he knows she can sing and they talked about bringing out her personality and she did it in such a way that is so cool.