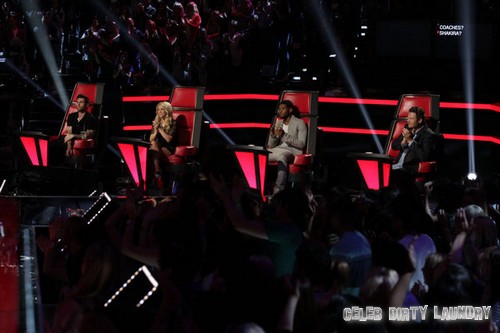 THE VOICE returns to NBC tonight with a whole new episode. On tonight’s show Shakira and Blake’s artists perform live, knowing your votes could decide who moves ahead. Did you watch last night’s episodes? We did and we recapped it for you here.

On last week’s Adam and Usher’s artists gave their best live performances, hoping to make it to the Top 12 round.  The live playoffs started with a few twists.  The standout performance of the evening was Team Adam’s Sarah Simmons.  Adam says he has never heard the room so quiet, the stillness because everyone was just so enamored.

Tonight’s  The Voice “Season 4  The Live Play-Offs, Part 2”  is going to be an exciting one, which you won’t want to miss. So be sure to tune in for our live coverage of NBC’s The Voice – tonight at 8PM EST!   While you wait for our recap, hit the comments and let us know how excited you are for the new season of The Voice.

First up tonight is from Team Shakira, Garrett Gardner and he is singing “Imagine” because Shakira wanted him to play the piano and sing it as a rock anthem. Garrett thinks it is going to be a real test to see if he can do the song justice.

Adam is so proud of Garrett because that is one of his most favorite songs and he is happy that he got to see this side of Garrett. Blake has no doubt that Garrett is a good looking dude and he is happy that there is a beast in there, he is the complete package. Usher says the fact that Garrett came back to the show makes him really happy. Shakira is very proud and says thank you.

A member of Team Blake is next, Holly Tucker. Her confidence roots from being bullied and just hearing Blake tell her that she belongs on the show is incredible. Holly is singing “How Do I Live Without You”. My favorite version from this song is the original from Trisha Yearwood, I hope Holly does it justice.

Holly gets a standing ovation from Blake. Usher says that was one of his favorite songs and he feels like Holly did an incredible job. Shakira thought that was so beautiful with a great pitch, unbelievable and an amazing performance. Adam thinks Holly is amazing and a beautiful woman and super talented. Blake is beside himself, he wants Holly to see that she proved to America that she deserves to be there and everyone else in the competition knows after that performance that she is the one to beat.

Next from Team Shakira is Kris Thomas and he used to be picked on at school because his voice is so high. Shakira has chosen for Kris to sing “When I Was Your Man”. Kris finds the whole experience humbling.

Adam thinks Kris has a great voice and understands that he was nervous. Blake loved the performance. Usher thinks his voice is incredible. Shakira thought he did an amazing job.

Team Blake’s Swon Brothers are next and they have dreamed of this moment since they were kids. The two have always been very close but this competition has shown them how much they really depend on each other. Blake has chosen then to sing “Fishing In The Dark”.

Usher thought that was pretty cool even though he has never heard the song before. Shakira thinks they are so much fun to watch and love that they just vibe to impress everyone. Adam thinks this is so Blake, a country moment that Blake has been dying for. Blake said that everything they talked about was so great, it was really good.

Blake and Shakira give a special performance singing “I Need You Now”.

From Team Shakira it is Karina Iglesias up next and she wants to prove to Shakira that she didn’t save her for nothing. Karina is singing “Let’s Stay Together”.

Adam said that he would like to clarify that she was not stolen, he gave her up and feels foolish for doing it because she is a talented woman. Blake is glad that he heard Adam admit that he completely screwed up, seriously though he thought it was great. Shakira says that Karina gave her everything on stage.

Team Blake’s Justin Rivers is next and being from the south he tends to chew on his words, he has to work on his vowels. Blake has chosen for him to sing “Meet In The Middle” because he wants him to prove that he is a hard core country singer.

Usher thought that was freaking cool, it was an incredible moment. Shakira thought it was so refreshing to see Justin in the middle of the crowd doing his thing. Adam loves that Justin was just owning it, he’s a huge surprise and damn Blake. Blake knows how talented Justin is and he loves watching the experience of Justin performing because he knows what he is doing.

Team Shakira is practicing their love performance and they will be singing “We Are The Champions”.

From Team Blake, Danielle Bradbery and she came on the show because her mother pushed her to audition. Danielle is singing “Maybe It Was Memphis” and she is trying not to be as shy as her dad who is also a singer.

Usher thought that was an incredible performance and definitely the beginning of a long career. Shakira says holy crap! Adam knew this was going to happen, he thinks she is one of the ones to beat in this competition, there are people twice her age that cannot sing as well as her.  Blake loves that song and Danielle brought it to a new generation, he thinks people are going to want her version of that song and thinks she is one of the most important people who have ever been on The Voice.

Closing out the night from Team Shakira is Sasha Allen and she is singing “Oh Darling”. Shakira wants Sasha to put a little more sexy into the song.