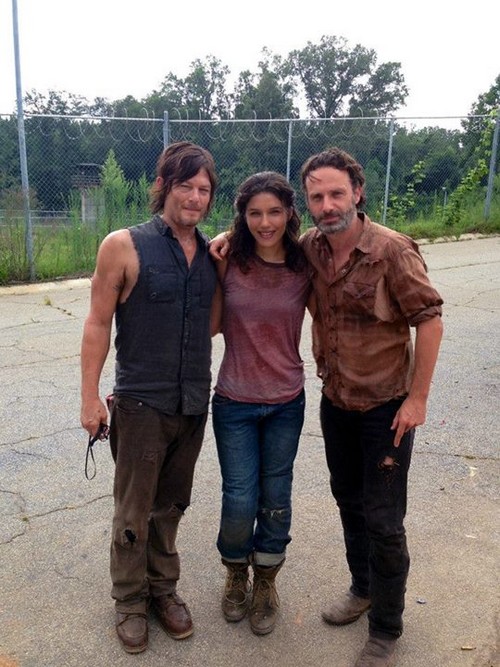 THE WALKING DEAD returned tonight and the story tonight focused mostly on the Governor.  We got the back story of where he was and what he was doing.   I can’t wait to see what he is going to be up to next week.  We have not one, but two sneak peek video and some insight for you below on what is going on next week episode, “Dead Weight.”

On tonight’s show we got to find out what the Governor had been up to.  It seems he was stumbling around for a while a broken man until he came to an apartment building and met some new survivors: Tara; Melody and Megan.  It seems tonight almost like they were trying to reinvent the Governor.  He taught the survivors he found how to fight walkers and he almost seemed to have a bit of humanity back.  Wegot to see the old Governor back, Philip.  Finally, as the Governor and his new family are in the woods the Governor looks up and it is Martinez.  Looks like his old life is about to collide with his new life.  Did you watch tonight’s episode?  We did and we recapped it right here for you.

Spoiler alert: If you’re one of those people who doesn’t like spoilers, stop reading now! We have some juicy spoilers for you about the season 4 episode 7 of AMC’s “The Walking Dead.”

AMC Official Synopsis: “The beginnings of a potentially horrifying chapter unfold with the establishment of a camp outside the prison; the possibility of the group finding peace amongst their savage new existence drives them to consider the idea of welcoming new members”

On next week’s show it will be another episode where The Governor will be featured as we race towards the mid-season finale December 1st, 2013.  The Governor is now hooked up with Martinez again, his old henchman.  They have a camp outside the prison.  The Governor and Martinez’s men go on a mission and they find the person they are looking for decapitated with a message that says, “Liar!”  This is suppose to start a new and horrifying chapter of the story.

The Walking Dead Season 4, Episode 7 “Dead Weight” airs on AMC on November 24th, 2013. Check out the preview videos from episode 2 below and let us know in the comments below what you think!