BY Nicholas Sanford on May 21, 2013 | Comments: 4 comments
Related : Spoiler, The Walking Dead 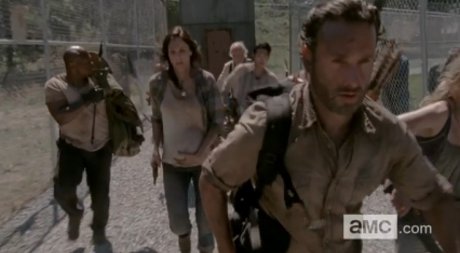 All you zombie lovers are probably mourning the loss of your Sunday night Walking Dead parties. Well, we’re sorry to say you’re going to have to wait until October to reclaim your traditions. However, as we wait in anticipation for Walking Dead season 4, why not take a moment to indulge in some glorious nuggets of spoilage, sneak peeks, and teasers! We say that’s always a wonderful way to spend the afternoon. Though, if you’re one of those individuals who becomes uneasy and prone to barfing around spoiled things, then stay away. Srsly. Go walk the dog.

In casting news, Lawrence Gilliard Jr. has been cast as Bon Stookey, a former Army medic with a dark and trouble past (I mean, isn’t that pretty much the case with everyone in the show now?). Some info also says he’s a drunk, and he may or may not make it past the first episode of season 4. Guess we’ll just have to wait and see!

Filming has already begun and those avid fans who’ve gone out to get a sneak peek of the cast have reported that the following people were seen: Norman Reedus (Daryl), Steven Yeun (Glenn), Chad L. Coleman (Tyreese), Sonequa Martin-Green (Sasha), and Danai Gurira (Michionne). So you can be sure they’ll be around somewhere!

Supposedly there’s going to be a plane crash in season 4. I don’t have anymore info on that. Just thought y’all should know.

In an interview with IGN, Robert Kirkman got into some details involving the Governor and Rick. What’s up with them?

“Yeah, [The Governor] is still very much in the mix. That’s certainly not the last that we’ll see of him. When we see him again and where we see him again, that’s the big question. It’s not going to be like it was in Season 3; it’s not going to be Rick and the Governor on a collision course with a conflict between them. He’ll be used in very different ways next season.”

What are you looking most forward to next season? Let us know in the comments section below and definitely check out the video we’ve posted for you below!