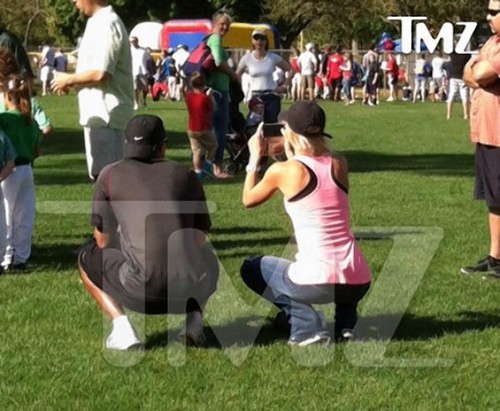 Golfing pro Tiger Woods may be dating Olympic skier Lindsey Vonn, but he was recently spotted with his ex-wife Elin Nordegren. So basically it looks like they have officially buried the hatchet? It could be that they are just acting like grown adults instead of publicly bashing each other like some celebrities do…

The formerly married couple have not been seen together in the same public place in quite some time, but they came together at an event in Jupiter, Florida with their children for a youth sports organization. A spy on the scene said, “Tiger arrived to the event first with his son and daughter and Elin arrived about an hour later…when their paths finally did cross, they chatted together for about 30 minutes and appeared to enjoy each other’s company.”

The snitch added, “Once the pair started to get attention, they took off….both leaving in Elin’s car.”

Interesting! One could see why they would have to spend some time together for the sake of their children, but why on Earth would they want to leave together in her car? Are Tiger and Elin trying to tell us that they have reconciled? Do you think she could ever take him back after all that he put her through? Hit the comments and leave us your thoughts on the matter!