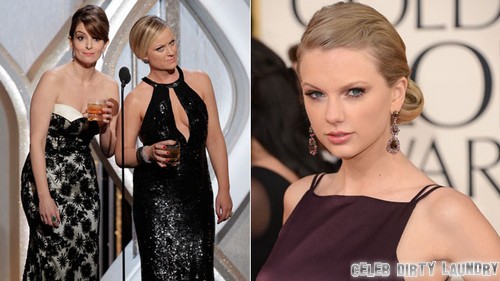 Who knew that country singer Taylor Swift couldn’t take a joke? I mean, besides all of her ex-boyfriends who had to go through the ordeal of dating her. Ha!

When Taylor’s Vanity Fair interview came out, she lobbed a dis right back at Amy Poehler and Tina Fey. If you’ve forgotten, when the comedic duo hosted the Golden Globes, they took a figurative jab at Swifty. They basically told her to stay away from Michael J. Fox’s son. It was funny to anyone who has a sense of humor. Apparently, Swifty took it to heart. So in response, she jabbed right back with, “There’s a special place in hell for women who don’t help other women.”

Amy has since responded, saying, “Aw, I feel bad if she was upset. I am a feminist and she is a young and talented girl. That being said, I do agree I am going to hell. But for other reasons. Mostly boring tax stuff.”

HA! And since, Tina has also responded. She said, “If anyone was going to get mad at us, I thought it would be James Cameron. I did not see that one coming. It was a joke. It was a lighthearted joke.”

Poor Swifty. She’s the one of whom you do not want your guy friends to date AND she has no sense of humor. Oh wait, she will probably just end up writing a song about this, too.