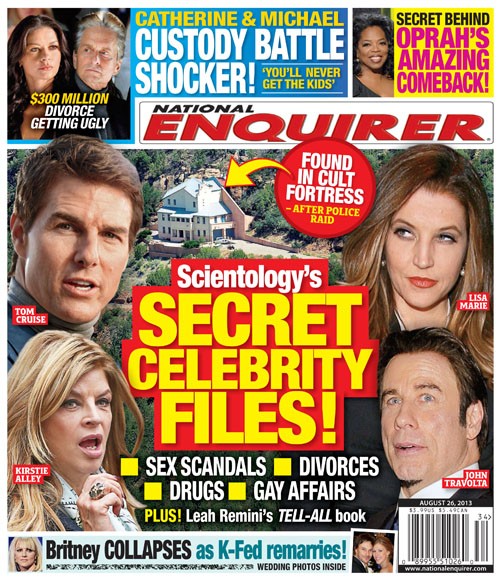 According to the latest headlines from the cover of this week’s National Enquirer, Scientology’s secret celebrity files on the likes of Tom Cruise, John Travolta, Lisa Marie Presley, and Kirstie Alley were supposedly found after a secret police raid on the ‘cult fortress’.

Well, this report directly contradicts what we’ve been hearing about Scientology’s ties with the police, which have been rumored for a while. Apparently, when Leah Remini filed that missing person’s report with the LAPD on Shelly Miscavige, remember they came back and said she was fine and wasn’t being held against her will? Well, Leah’s apparently not satisfied with that report and supposedly wanted to see some sort of evidence or proof, which they obviously did not provide to her.

Anyway, the police didn’t really seem to take all these allegations seriously, which may have been an oversight on their part. Despite that, the Enquirer seems to claim that the cops had a ‘police raid’ on a secret Scientology fortress [although they call it ‘cult fortress’], and the report claims to have details on the sex scandals, drugs, divorces, and gay affairs that surround Scientology’s highest profile members.

Let’s run through each of these. Sex scandals? Well, I think we know enough about Tom Cruise, John Travolta and Lisa Marie Presley’s sex life, and I don’t think anyone wants to know anything about Kirstie Alley’s sex life. Divorces and gay affairs? Again, the gay affairs surrounding Travolta are no secret, and I wouldn’t be surprised if it turned out that other elite members of Scientology were also closeted. And obviously, divorces are public news. Finally, we have drugs. Well, they probably need to be drugged up to believe that aliens are their overlords, so I’ll give them that one.