Top 10 Greatest TV Moments of 2013: Breaking Bad Finale, Daenerys’ Rise to Power on Game of Thrones among the Best! 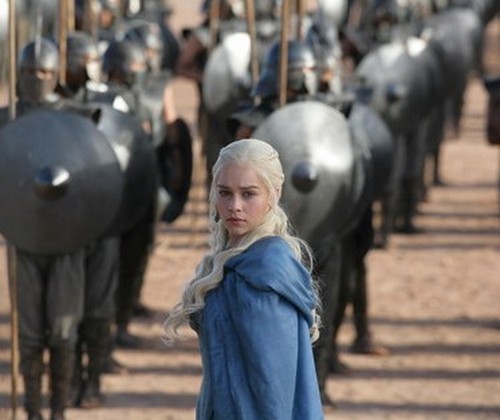 2013 was full of great television moments and, even though it’ll be impossible to wrangle them all up in one simple post, we’re going to do our best to corral some of our faves. We here at CDL watch just about every show on television, so it took a great deal of concentrated meditation to recall all of our “OMG” and “What-huh?” and “NO-freaking-WAY!” moments we experienced over the course of the year. If you have some faves that we missed (and of course we missed some!), be sure to leave them in the comments section below. Warning: some spoilers.

1. Breaking Bad finale. Really, must we elaborate on this? While this list is in no particular order of greatness, it seems only right that this show would take the first spot. It was only the most talked about series — and finale — of the 2013 year. If you’re still watching the series, we won’t spoil it for you, but just know you can expect greatness (and probably some sadness).

2. ALL THE THINGS on Game of Thrones. Daenerys, proving that she’s definitely one of the most badass characters on television, acquired an army and proved she should never be messed with as long as she’s a mother to dragons. We also experienced a little event known as the Red Wedding. Basically, all the people died. We cried. (And realized we could’ve been spared this surprise torment if we’d just read the books).

3. Kathy Bates, Jessica Lange, and Angela Bassett on American Horror Story: Coven. What do you get when you mix an old witch hellbent on preserving her youth, a racist Southern woman cursed with immortality, and a Voodoo priestess with a vendetta against the affluent Witches of Salem? Well, you get one hot mess, but only in the best possible ways.

4. Walking Dead. Because zombies were all the rage this year and like, OMG, so totally hawt.

5. Under the Dome was all like, “We’re just going to put an invisible dome over a town and fans are going to FREAK THE HELL OUT every week.” The premise of this show was, surprisingly, quite enticing. Who would’ve thought that so much could go down in a quaint city when they’re cut off from civilization by the hands of mysterious-dome-creating-aliens (or something like that)?

6. Stydia on Teen Wolf. If you’re a fan of the show, then you know obviously know who to root for: Stiles (main character’s BFF) and Lydia (main character’s love interest’s BFF). They finally shared a kiss in 2013. Now, we just hope that tense romance will bleed over into the New Year.

7. Once Upon a Time rips our hearts out. After Peter Pan, the biggest baddie, was put to rest, Regina was forced to save all of Storybrooke by undoing her Terrible Curse and transporting everyone back to the Enchanted Forest. All good, right? NO! Emma and Henry were force to stay behind in the mortal world — without. their. memories. O, the cruelty! This just proved that OUAT is still in it to win it and not afraid to take chances with their characters and stories (even if Snow White+Prince Charming are two of  the most annoying characters on the planet).

8. Orange is the New Black has the Netflix community on their feet. Based in part on a memoir written by Piper Kerman. The show was considered groundbreaking and further solidified Netflix’s role in generating high-quality, on-demand content.

9. Lena Dunham continues HBO’s Girls with the notion, “Imma do what I want and wear no clothes while doing it.” Writer-comedienne Lena Dunham presented season 2 of the hit show. While, at times, we weren’t quite sure whether to laugh or cry, the show definitely possessed a unique charm that we hope remains in season 3 (airs January 12th, 2014).

10. Teen Mom 3 was canceled. But we’ll still be subjected to future reiterations of the MTV franchise. Help us.

What were some of your best/favorite television moments of 2013? Let us know in the comments section below. We hope you have a fantastic New Year!