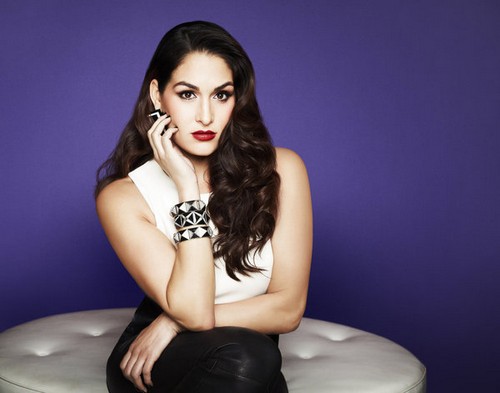 After an almost two-month hiatus tonight on E! TOTAL DIVAS continues with a whole new episode called, “Nurse Nikki.” On tonight’s show Eva Marie is asked to announce on live TV.  Did you watch the last week’s crazy episode before the break?  We did and we recapped it right here for you.

On  the last episode Nikki was threatened by Eva Marie’s rising popularity while Ariane struggled to control her anger issues. After an accident during a match, Nattie feared returning to the ring during SummerSlam.

On tonight’s show Nikki moves in with John Cena but is shocked when he makes an unexpected demand. Meanwhile, when Eva Marie is asked to announce on live TV, she contemplates cheating.  Ariane’s health issues get worse, thatmeans her tag-team partner Trinity has the opportunity to prove she has what it takes to be a strong solo Diva.

On tonight’s episode of Total Divas, all of the girls were dealing with their own personal problems.

Eva Marie has been asked to speak at a live wrestling match. She has made mistakes in the past and is nervous about screwing up on live television. She meets with Bryan, the WWE public relations coordinator, and reads her practice speech to him. He is not impressed, she has a ton of facts wrong about the wrestler she is supposed to be introducing. She thinks she should cheat, and write down what she is supposed to say on her hand, Bryan said she can’t do that. He tells her she needs to learn all of the wrestlers’ names, and where they are from, before the match.

John and Nikki are riding in the car and discussing her sister Brie and her boyfriend Bryan. (Bryan won the WWE champ belt from John in the previous episode). Nikki is happy John is done with his surgery, but a little upset that the Dr. told them they can’t have sex for ten days, because John’s arm needs to heal.

Trinty’s boyfriend Jon pays her a visit. She is concerned about his foot. His toe nail is green and blue, and it is bleeding. He won’t go to the Doctor. She is afraid his toe is going to fall off.

Bryan and Brie are getting ready to go to the gym and work out. She is going over his schedule with him and helping him plan his outfits. He is going to be on the road for the thirteen days straight. Brie thinks they have become WWE’s new power couple.

Eva is at the live match, getting ready to announce the wrestlers. Nat is going over the wrestler’s names with her, she still can’t remember how to pronounce half of their names. Nat isn’t impressed.

Nat climbs into the center of the ring to announce the six man tag teams, and she forgets one of their names. She completely freezes on live television.

Bryan calls Eva out when she gets out of the ring. The wrestler noticed that she didn’t call his name.

Meanwhile, Trinity’s boyfriend Jon is one of the wrestlers in the ring. He never got his toe looked at by a Doctor and he starts hopping up and down, obviously injured. He comes back stage, and Trinity rushes to check on him. He sock is covered in blood. Somehow he ripped his toe nail off.

The wrestler that Eva forgot to announce approaches her and asks her why she didn’t call his name. She apologizes and says that she was nervous. He asks her if she even knows his name, and she says, “Yes, Ginger.” He’s not happy. His name is not Ginger, it is Jinder. She apologizes profusely. He tells her if she wants to work here she needs to show respect for people that have been wrestling for years and learn their names.

Nikki has decided to nurse John back to health, and dresses up as a Sexy Nurse. She decided to give him a check-up.

Trinity is accompanying Jon to the Doctor’s office so he can get his toe checked out. The Dr. says he has a fungus, and he needs to cut the rotten toe nail off. He prescribes him medicine to clear up the infection. He also reveals that it is contagious and Trinity could get it on her toes. She has the Doctor check her toes, and she already has some of the fungus from Jon. She’s not happy.

Bryan and Brie are face-timing since he is away from home so much. Brie misses him a lot, she’s happy that he is becoming so successful, but wishes she could spend more time with him.

Nikki is unpacking her stuff and almost officially moved into John’s house. She is over-joyed. And then, John has a request. He wants her to sign a co-habitation contract. He needs her to sign it three times, and get it notarized. Nikki is not happy. The document refers to her as his “guest” and states that at his request she has 48 hours to leave the premises. So, basically if they get in a fight and he kicks her out, she has no rights. He tells her that if she doesn’t sign the paper, then she can’t live there with him. She walks out on him, she needs time to think about whether or not she will sign the paper.