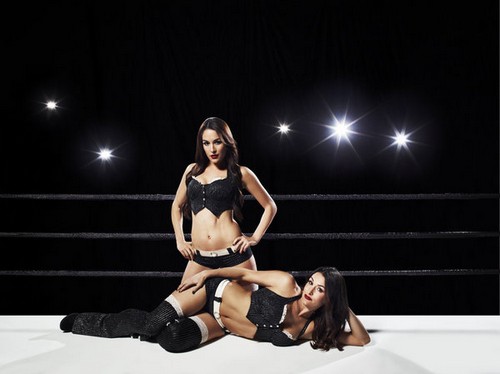 Tonight on E! TOTAL DIVAS continues with a whole new episode called, “Saying Goodbye.” On tonight’s show and the season 1 penultimate episode, tensions grow between Brie and Nikki about Nikki’s medical leave.  Did you watch the last week’s crazy episode?  We did and we recapped it right here for you.

On  the last episode Ariane pushed Vincent to try out for the WWE; John Cena’s house didn’t quite feel like home yet to Nikki; and Trinity’s relationship with Jon was affected when her dad arrived for an extended stay.

On tonight’s show Nattie and TJ must put their beloved pet to sleep. Trinity and Jon come to blows over his jealous behavior. And tensions grow between Brie and Nikki about Nikki’s medical leave.

Tonight’s episode is going to be filled with lots of guaranteed drama that you won’t want to miss, so be sure to tune in for our live coverage of the show tonight at 10 PM EST! While you wait for our recap hit the comments and let us know how excited you are about the this season of Total Divas!  Also check out a sneak peek of tonight’s episode below.

The WWE seamstress just doesn’t seem to ever fit Trinity well. All of her outfits usually have some part of her body hanging out. Sandra really needs to do better when it not only Trinity complaining.

The Bella Twins have been separated for months. Brie is out there continuing with the job but with her sister out of commission; her job is actually harder than she thought. As in her competitors are wiping the floor with her. Nikki on the other hand has been doing better. She’s off her crutches and using her sick time to relax and enjoy some quality time with her boyfriend. Again not as easy. In her case though she has to deal with John who can’t seem to find a way to relax.

Ariane is a business woman. She’s looking to expand her brand by going into the music industry. Her boyfriend has been really supportive and she’s thinking maybe she could help him. Right now he drives an armored car and that’s it. She wants him to look further afield than merely that. She convinces to try out for wrestling. Too bad she hasn’t even begun to arrange an interview before she got him excited.

Trinity’s dad is coming to town and she’s happy that he’ll be staying over at her place. However her dad and her fiancée are kind of bit iffy. Not enemies but not friend. She’s hoping her dad’s visit will help change that. Preferably for the better.

Trinity isn’t the only one looking forward to visitors. Nikki wants to redecorate her and John’s home. She feels like it’s an Hotel environment and she wants to make it more her own before having family visit. But John is still thinking of the place as his and only his. Like the hamper. He has a separate hamper for work-out clothes. He’s very strict over what belongs in each hamper. Nikki is starting to joke about his obvious OCD.

Ariane did get Vinnie his audition and he fails at it. Sure, he’s a big dude but he fails at cardio. The coach auditioning him as favor eventually had enough. He told Vinnie he wasn’t ready and let that be the end. Poor Vinnie is getting sick from the exercise as well as being pretty much embarrassed. All of this wasn’t his idea. He did it for Ariane and now he’s sorely regretting it.

He goes back for Ariane though. It’s not surprising that the same problem arises. He hasn’t got the momentum and no matter how many times Ariane mentions how big this opportunity it will change that. The coach has to call a halt to his training. Vinnie can’t help crying afterwards. It’s one thing to never go after your dream and it’s another to get rejected.

Trinity’s parental visit is putting strains on her relationship with Jon. Her fiancée can’t take the non-boundaries visit. He’s annoyed that the man can play music to all hours and that Trinity appears to use the older man as her personal chef. There is never a private moment because her dad is always there. He wants her to talk to her dad about giving them space and Trinity feels that would be too rude.

Nikki is getting frustrated with John. She wasn’t allowed to decorate (not so much as a family photo anywhere) and yet she thought to do something nice for them both. She cooked a romantic dinner for them and all John can see is the mess (both what’s there and the future possibilities). He doesn’t like for food to be on granite counter top nor does he likes to have the glass wine without anything underneath it. Nikki tried to keep up her spirits by suggesting to get table mats next time when he showed his dismay that this was going to be more than a onetime thing. That finally dove under her shell to hurt her feelings. She did this for him and he couldn’t appreciate it.

It took John’s friend to point out what he did wrong to him. He said he never wanted someone to do things their way then he should never interact with anyone else.

Trinity and John were out listening to her dad’s band playing when her dad asked if the band could come back to their place. She said yes but Jon is mad. It was more than just the band that came over later. Her father is throwing a party essentially. Jon has to work in the morning so this party was his last straw. He talks to her about and still she sides with her dad. Jon couldn’t take it and left.

John knew he hurt Nikki and he knew the best way to apologize would be with roses. He risked his pristine kitchen with roses and candle (his two big no no’s). Nikki understood how much that most have cost him and is touched by what he did. She’s willing to forgive.

Trinity worked herself up to talking to her dad. She ‘ll always love him but she can’t keep putting him first anymore. He’s not angry though. He’s willing to listen and understand where she’s coming from. John has to be the number one in her life now.