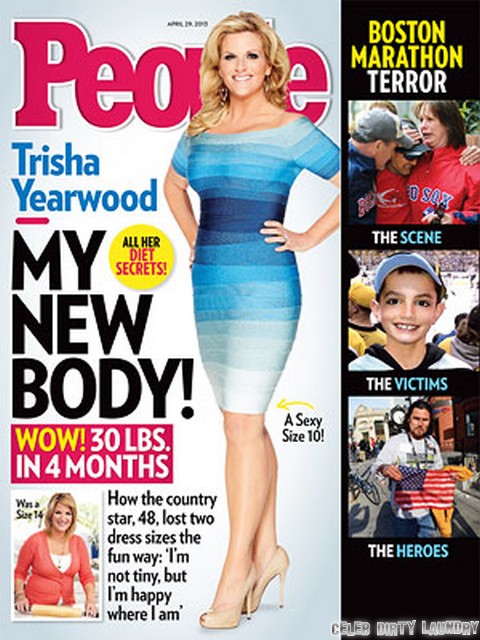 I guess Christina Aguilera isn’t the only singer to check herself out in a mirror and realize that it was time for a change! Long time country starlet, Trisha Yearwood decided that those extra pounds were starting to really weight her down and so she has managed to drop 30 pounds in only 3 months. According to the latest issue of People Magazine the singer decided that she didn’t need to be teeny tiny, but that an overhaul was in order.

After several years of marriage to Garth Brooks the 48-year old opted to lose the weight the fun way and her husband couldn’t be happier with her body renovation. Trisha admits to being one of those people who has tried everything to lose the weight in the past.

“I don’t think you can name one diet I haven’t done. I’m that girl who buys every magazine where somebody’s lost 30 lbs…I guess a part of me didn’t want to hear that it’s just really hard work!”

People is also taking an in-depth look at the Boston Marathon bombing.  What we are learning for certain are the heroic stories of regular people that sprung into action during the crisis. People also takes a look at the lives that were lost, introducing readers to the people so that they are more than just a name flashed across news screens. It’s a story that has hit home with all of us so the very least we can do is honor the everyday normal people that have been deeply affected by this terrorist act.

Are you inspired by Trisha’s major weight loss? Tell us your thoughts on these stories in the comments below!