BY William Blesch on August 26, 2013 | Comments: 2 comments
Related : Recap, Television, Under The Dome 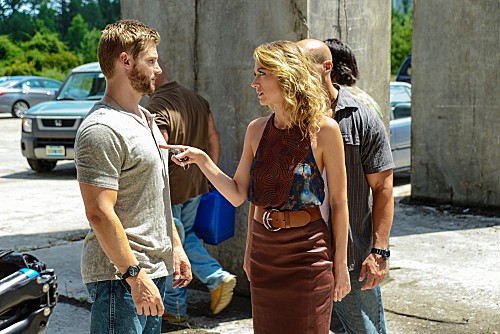 Tonight on CBS their new drama UNDER THE DOME continues with its eighth episode called, “Let the Games Begin.” On this week’s episode Maxine shows Barbie how she plans to take control of the town. Did you watch last week’s episode? If you want to get caught up and missed it, we watched and we recapped it here for you.

On last week’s episode Big Jim and Barbie discovered their lives were more intertwined than they knew when a mysterious woman, Maxine, showed up unexpectedly in Chester’s Mill.

On tonight’s show Julia uncovers the truth about her husband’s disappearance and unravels some of Chester’s Mill’s darkest secrets. Meanwhile, Maxine shows Barbie how she plans to take control of the town.

This is definitely one series that you will not want to miss this summer. Don’t forget to stay tuned to Celeb Dirty Laundry where we will be live blogging every episode all summer long. Under the Dome Episode 10 “Let the Games Begin” airs tonight at 10PM on CBS.

RECAP:There is a caterpillar inside of the small dome, Norrie wakes up beside Joe and realizes that the caterpillar is inside; they have no idea where it came from and it has yellow and black stripes which means it will become a monarch. They start thinking about Julia being the next hand they need, but she hasn’t had seizures yet. They put their hands on the dome again and need to find the next chosen person.

Dodee goes into the barn and finds the egg in the little dome.

Barbie goes to talk to Big Jim about Max; Big Jim asks him what they will do because of the dirt she has on them. Big Jim says he will go check out some leads about her; Barbie says he wants to go too  because he doesn’t trust him. The two start looking at housing and realize a little island like place is also under the dome; Max walks in and they hide the map.

Max comes in and gives Big Jim some espresso to make for her and then decides that Barbie will go out with her for a while; Barbie follows.

Dodee touches the small dome and is given an electric shock which knocks her out and throws her away; she has a burn on her hand.

Dodee is brought to the hospital and she can’t remember what happened at all; she thinks it was the generator at the radio station, Norrie, Joe and Angie go along with the story and leave her there. Julia sees Lydia at the police department looking for Barbie; Lydia shows her the footage of Duke and Max making a trade. Lydia believes Duke was part of the drug trade; she looks at Duke’s hat and notices that there is a key inside of it. Julia says it could be a safe deposit at the bank; they leave.

Junior is driving around in the police car and a guy starts running away; Junior cuts him off and slams him against the hood; he opens his backpack and sees the guy has salt. The guy says it’s better then cash to get into a cement factory. Max warns Barbie that he and Big Jim should stop whatever they are planning because it will be a grave mistake. Max has some adult club underground at a far off place; there’s some sort of fight club where people are fighting each other.

Big Jim is on a boat and reaches the small island that is within the dome; he notices an incredibly large building. He walks on over to a woman gardening; she asks who he is and realizes that it’s Big Jim from his used car commercials. Her name is Agatha and welcomes Big Jim; the owner of the building is a man named Oliver. He mentions how he is the council man now and works for the people of Chester’s Mill; she offers him a cup of tea and he agrees.

Max is excited about her club and Barbie asks what this place is for; she mentions that if she’s going to live in this hell hole that she will live as great as she can. Angie tells Norrie and Joe about how Junior must be the next person they need; they don’t like Junior and then Angie says that Junior held her captive.

Joe says he’s going to kill him, Norrie stops him and tells them that if he is the fourth hand then they have to work with him. Angie tells them Junior had a seizure a long time ago and that there is more proof to him being the fourth hand.

Lydia and Julia are in the bank; Julia mentions how her husband Peter ran out of town after he used all of the money in their bank accounts. Lydia finds a locked door and takes a fire extinguisher to break it open.

Junior is walking around and someone notices him and says that there’s nothing for him inside the place he’s going into; the guy punches him in the face and Junior looks pissed. Back at the club Barbie is watching people fighting in the club and everyone is gambling on the fighters; Max mentions that Barbie is going to fight. She uses the fact that he killed Julia’s husband and will tell her if he doesn’t do it; she picked a man who he has history with who would love to beat him up.

Big Jim is looking through the house while Agatha makes his tea, he still doesn’t believe that it’s owned by this Oliver guy; Big Jim sees a picture and picks it up; Agatha comes out with a rifle and tells him to get rid of his gun. Agatha then mentions that Maxine didn’t learn to be the way she is from her father.

Maxine comes in asking if they are ready for the main event, she welcomes Barbie into the fight and everyone is cheering. It’s a fight with no rules; anything goes. Barbie gets punched in the face hard and goes down; he kicks the guy in the leg and brings him down.

Big Jim has the rifle pointed at him and Agatha asks if he remembers her; she said they were in high school together but she dropped out. Agatha mentions that she dropped out because she got pregnant at 16 and was looked down on, she said that she was put down a lot. She has a huge grudge against Chester’s Mill, she tells him that she has all the evidence about the propane. She then tells Big Jim everything that Barbie did. Agatha talks crap about Junior and calling him crazy like his mother was; Big Jim gets up angry at her.

He tells her to pull the trigger and kill him, he gets up close and edges her on to shoot him; she does nothing and he grabs the gun and points it at her. Angie shows Norrie and Joe the painting of Junior and the pinks stars. Junior comes in and Joe walks over to hit him; Junior gets him in a choke hold. Angie tells him to let go and Junior tells her that he trusted her to keep it a secret and not have anyone near his memories of his mothers belongings. Angie tells him to go to her barn and that all four of them are connected.

Barbie is beating up his opponent pretty well; the two are bleeding and barbie knocks the guy down on the ground; Maxine gives him a look and Barbie frustrates the guy and tells him to hit him as hard as he can; Barbie goes down and Maxine looks very unhappy. She calls the man as the winner and many people are booing for Barbie’s loss; Maxine says he threw the fight. She was happy because she knew he would do that and have bet on his opponent; his plan made her win.

Linda and Julia find something that Julia gave Duke after he went through his heart surgery; Julia finds a letter and reads it out loud. It’s from Duke and it’s his confession of how he saw his own son die of drugs; he tried his best to keep the drugs out by making a deal with Maxine. She paid him enough and even made a deal to keep all the drugs made there will never be sold in Chester’s Mill.

Maxine tells Barbie to cheer up and offers him a drink which he doesn’t accept; she says her night was very successful having him lets her win. She says that they make a good team and she goes to kiss him but he completely denies her; she believes she will live the way she wants. Barbie asks what if she doesn’t get her way; she says she will burn the place down. Barbie is walking off and she threatens to tell his secret; he walks out not caring saying they are finished. Linda is sitting outside of Big Jim’s house and goes to talk to him about what she found in the bank, he invites her in but she says they should take it at the station. He says whatever they have to talk about they should leave for the morning; she tells him to come by first thing in the morning or she will cuff him. Barbie is back at Julia’s and says he needs to tell her something; he tells her that when he first came to this town that he went to go meet Peter that he was actually there. She mentions how she found his gun missing in his bedroom; Julia knew that he was killed but didn’t want to believe it. She says that she thought that Peter meant to die after Julia found his life insurance, Barbie says that he’s sorry for everything. Julia says that she is too, she says that in the future Barbie should not tell anymore lies. Norrie, Angie, Joe and Junior are in the barn with the small dome and the egg inside; Norrie notices how the caterpillar is in a cocoon; Junior watches them put their hands on the dome. He sees one for him and he puts his hand on the dome, the power goes out in the barn and the egg produces these pink stars that make constellations.