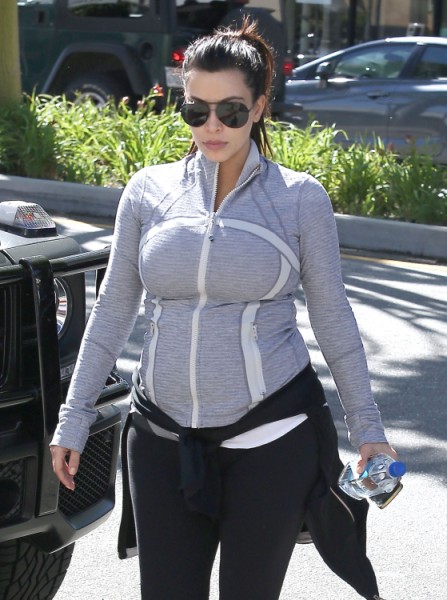 She means Kim Kardashian’s pre-baby body, right? Because I can get behind the fact that Victoria Beckham wants to tone up but I won’t ever believe she wants all that Kim’s working with. Still, nothing motivates a woman quite like her husband’s indifference and marital troubles have been plaguing the Beckhams in the press lately. According to Closer magazine, Posh thinks adding a little curve and definition to her insect body (fresh with new mosquito bites) will bring the love and attention back from David Beckham.

“But now she’s determined to have ‘buns of steel’ and abs to rival David’s – she wanted to surprise him with her new body when she got back from LA, where she took the kids for the Easter holidays,” a source told the mag. “Victoria says she wanted to feel confident in her skin again and wants to be sexy for David. She’s three weeks into the plan and has told pals she’s like a new woman already!”

So she hired Kim Kardashian’s trainer, Tracy Anderson. Is Tracy really know for curves? I thought Tracy was more recognized for helping everyone look super skinny with thin arms and legs. Posh already has those. What the crazy, misguided biotch needs is a diet that allows her to eat over 1,000 calories a day. That will do the trick in no time. You know it’s funny. David has allegedly cheated throughout the years. Girls have come out. Scandals have been managed. None of the chicks ever looked like Posh. They were never super skinny or anorexic looking – most were quite healthy and fit actually. You’d think she would have gotten the message years ago. Your husband likes meat! Maybe she’s finally going to relent and give it to him. But this is at a mighty big cost to her. Posh likes thin. She has to be the smallest in every room she enters. There must be trouble in that marriage. This is extreme for her!

What do you think of the Victoria Beckham/Kim Kardashian story? Would you ever believe Victoria was jealous of Kim’s “cottage cheese” ass?