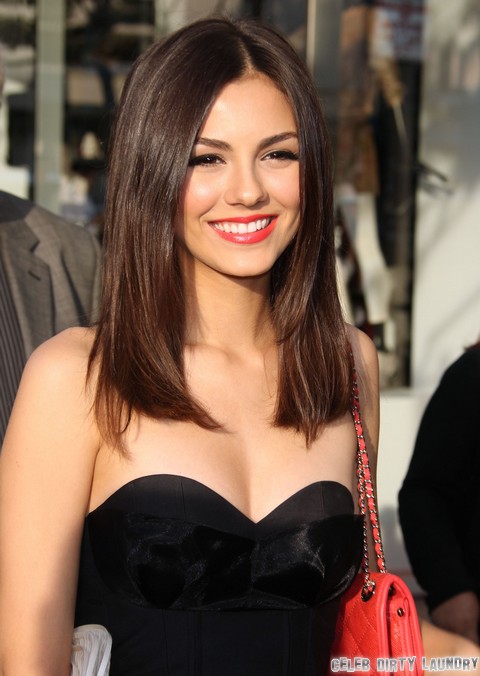 Nickelodeon star Victoria Justice is freaking out because photos of her were leaked on line by OceanUp. Apparently the teen star modeled an 80’s aerobic-instructor suit and took pics of it with her phone as a joke because she thought it was hilarious – until the phone got stolen. Now the shots, which show Victoria in a painful looking, super high cut crotch shot suit have hit the internet and she claims to be unhappy.

Girlfriend took to her Twitter to publicly lash out at the site saying,

@OCEANUP My phone was stolen & some1 leaked this. Wasn’t meant 2 be “sexy”, I took it as a joke cuz I look like an 80’s aerobics instructor.

Okay, I’m going to be evil for a moment here and play devil’s advocate. If you are taking a photo of yourself that you think is hilarious, do you take 4 perfectly posed, camera ready shots? Also when things like this fall into the wrong hands there isn’t usually an instant Twitter war but more like an effective threat of legal action.

Perhaps Victoria has watched a whole bunch of teen stars before her profit from sexing up their image and she’s thinking it’s her turn. Her Nickelodeon show was just canned and she needs to find a new gig. Perhaps this “leak” was intended to sex up her image a bit (think Vanessa Hudgens) to get her a more adult kind of role. She wouldn’t be the first (or the hundredth) young Hollywood star to take this approach and she would also be far from the last.

Do you find this whole thing a little bit shady? Tell us your thoughts in the comments below!