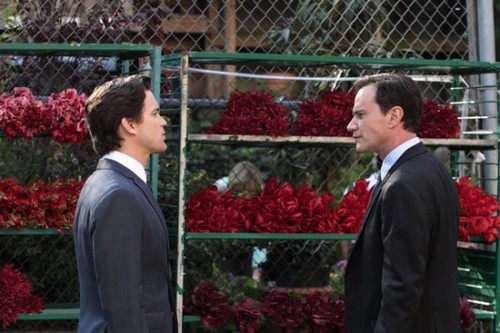 White Collar continues tonight with an all new, exciting episode called “No Good Deed.”  On tonight’s episode, Neal worried because Peter is looking back into a crime he committed. This sounds like it’ll be a fun episode, so you won’t want to miss it.  If you missed the previous episode and need to get caught up before tonight’s epic show, then be sure to check out our full recap RIGHT HERE.

On last week’s episode Neal and Peter took on an unprecedented asset recovery case for the Museum of Natural History: a stolen Tyrannosaurus Rex skeleton and its egg.  This sounded like it’ll be a fun episode, and it was!

On tonight’s show Peter’s thrown back into an unsolved larceny case that has Neal worried – because Neal’s the one who committed the crime.

Be sure to stop by here later tonight at 9 PM EST for the live recap of White Collar season 5 episode 9 “No Good Deed.” It’s sure to be a great one, and we’d love to hear your thoughts throughout the show. In the meantime, hit up the comments below to chat about all the things you’re loving about this season. Where do you hope the characters will end up by season’s end?

In tonight’s episode Neil has just revealed his true identity to the adorable Rebecca and she didn’t exactly turn him away. They wake up in Neil’s apartment the next morning making jokes until one of the jokes remind Rebecca how much Neil’s life is complicated by his ankle braclet. She says she’ll get used to it. Like the fact he can’t ever go to her apartment because its outside his perimeter. Rebecca decides to forget the obstacles they have in order to ask a couple of questions. She wants to know about the Codex and the mystery surrounding Chapter 13. Neil tells her that he can’t though. He had given the chapter to someone he rather not deal with again.

Neil may not be speaking about the codex but he hasn’t given up on finding out more. He and Mozzie found a certain church window they need to learn more about. In the meantime, Peter has caught a lucky break. He found a piece of the Welsh gold. The very same one Neil stole for Curtis Hagen. Peter doesn’t know Neil’s part yet and if he works it right; Peter may never know.

Peter has organized a whole task force to trace the one coin they found. Apparently several people have either stolen or bought it illegally. Peter asks Neil does he have anyone in mind who could commit the crime. Neil says he doesn’t but he’ll keep his ear to the ground.

Neil preferred to work this case in his own way. He does this by going to the State’s Attorney that was on Peter’s case. He asks Mr. Dawson who did he fence his stash to? After a while, Dawson admits he used Hagen’s guy to get rid of the gold. Neil can’t understand what Hagen’s plan was but he’s starting to think he’s being set up.

Peter didn’t trust Neil to get the name of whoever fenced the gold. He chose plan B in which he found Mozzie and asks him a couple of questions. Within seconds of seeing Peter, Moz destroyed all his burner phones and ended up missing a call from Neil. If he had gotten the call then he wouldn’t have given Karl’s name and whereabouts to Peter. Neil had later told him that Karl could be linked directly backed to him. Moz didn’t know that beforehand. He thought only the State’s Attorney would go under.

Peter and Neil arrive at Karl’s place at the exact time. Now neither of them will get to have the chance to question Karl by themselves. Luckily, Moz was vague in giving Peter directions. This allowed Moz enough time to vacate Karl but Peter is onto him. He saw Moz’s shoes at the scene. Technically they were on another person’s feet but Peter is still suspicious.

Moz and Neil are at his place when Rebecca comes for a visit. Her nosey self goes poking around and she find blueprints for the church. She sees they’re hatching a plan for the stained glass window and she wants in. Neil tells her he’s trying to protect her, but she doesn’t want that. She wants to be a part of it and somehow she manages to convince Neil to allow her a role.

Rebecca plays her part very well. She distracted some of the contractors and Moz distracts the one remaining strangler with a religious conversion. They got the window but as they were leaving Peter arrived at the church. He knows the window was stolen and he’s guessed who was behind it. This is just more mounting evidence in Peter’s mind.

Neil has an alibi for the burglary. He claims he was busy buying a Cronut and even still has the delicious treat. Peter can’t prove Neil is lying although he will try to trap him. He told Neil that they found Karl and are about to bring him. Neil has no choice after hearing that. He told Peter he stole the coins and why he did it. He says the coins were used to bribe the prosecutor on Peter’s case without bringing up Hagen.

Peter wants to bring in Neil and Dawson on charges. He knows this is the end of his career and is willing to accept that. Elizabeth on the other hand tells him to think things over. Does he really want to give up the life they built together?

Jones brings in Karl. For real this time. Peter leaves Jones to interrogate Karl all on his own while he goes to talk to Dawson. Neil volunteers to go with him but Peter turns down his offer. He didn’t want anyone else there to hear the ultimatum he offered Dawson. As long as Dawson surrenders the gold anonymously and retires from his position then Peter won’t arrest him.

Peter tells Neil what he did and he also mentions he’ll never make a compromise like that ever again. Things between him and Neil are going to change because now Peter won’t forget how much of a criminal Neil will always be. Neil says ok. He knows he is the criminal Peter thinks he is and very soon he’s going to be dealing with Hagen about the window he stole.