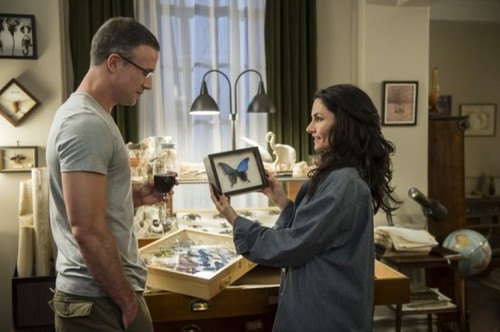 Tonight on Lifetime, WITCHES OF EAST END continues with another new episode.  The show is inspired by Melissa de la Cruz’s New York Times best-selling novel, Witches of East End, and centers around the mysterious Beauchamp family.  On tonight’s show, called “A Few Good Talismen,” Joanna and Harrison try to protect Principal Redmond from the shifter.  Did you watch last week’s premiere episode?  We did and we recapped it right here for you.

On last week’s episode Ingrid struggled with the consequences of the resurrection spell. Joanna tried to figure out which of her many former enemies might be responsible for framing her. Wendy taught Ingrid and Freya how to use their powers. Freya got a new co-worker at the bar.

On tonight’s episode Joanna’s immortal attorney Harrison prepares for her murder trial. Afraid for Adam’s safety, Ingrid re-evaluates her relationship with him. Penelope recruits Freya to help her mend the rift between Dash and Killian. Wendy seduces an entomologist (Freddie Prinze, Jr.) while trying to gather ingredients for a spell. Joanna and Harrison try to protect Principal Redmond from the shifter.

The show opens up with a flashback to 1693. Joanna is running through a meadow and she stumbles across two burning bodies — Freya and Ingrid. Apparently, some man turned in her daughters for witchcraft because they were “reckless.”

Joanna is with her lawyer and they’re going to the courthouse with the principal (of the school she works at). Freya and Dash are talking, and they discuss Dash’s past relationships. He says he wants them to be honest with each other about everything. No secrets.

Meanwhile, at the library, Ingrid’s friend is super excited about her pregnancy. She asks Ingrid to be the baby’s godmother.

Freya walks in to have a chat with Dash’s mother. They chat about the woman that came between Dash and Killian. Dash’s mother wants her family to be whole again, and begs that she invite both of her sons to dinner.

Joanna and her lawyer visit the scene of the crime — where the man was killed, and the crime she’s being accused of committing. Joanna channels the dark energy and discovers the Shifter’s next move: it seems as if its going to target Joanna’s principal.

Joanna plans on using the principal as bait to catch the Shifter. Ingrid and Adam’s relationship continue to advance romantically. Freya is happy that her sister’s finding love, but Ingrid continues to be skeptical about Adam’s romantic intentions.

Freya finds Killian and invites him to the family dinner, but Killian says he has a date.

Wendy is researching butterflies and pulls up an entomologist’s profile on the internet; Freya walks in and Wendy immediately closes her computer. Freya wants help bringing Killian and Dash to dinner — using magic.

Wendy, in cat form, sees the entomologist she was researching come home. She runs down the hallways and turns into her human form, naked, and she’s successfully captured his attentions.

Wendy says sorry. She says that she just moved in upstairs and got locked out of her apartment.

Meanwhile, Joanna and her lawyer are trying to protect the principal — but she has a vision and the story seems to be changing. She says, “Tonight will need a new ending.”

Adam throws Ingrid a surprise, romantic dinner in the Library, and she says her life is extremely complicated right now and she can’t be involved with him.

Freya tries to complete her beacon spell — which will, supposedly, draw both Dash and Killian to the same dinner.

Wendy, still in the entomologist’s apartment, is being shown his butterfly collection. He shows her a special butterfly — the one she was researching online. She appears to want it/need it, but before she runs away with it she hooks up with the entomologist.

Back at the principal’s house, Joanna’s lawyer finds a room that the Shifter’s been using to work his magic. He can’t believe his eyes and, before long, is attacked.

Freya’s spell seems to have been successful. She arrives at Dash’s mansion and hears Killian playing piano. Dash arrives as well, but Killian can’t stand seeing Freya and Dash together.

Ingrid is walking home from the library with her newly pregnant friend, but her friend grabs her stomach; it seems as if she’s having a miscarriage.

Joanna calls for her lawyer, but she finds the dead principal instead. The Shifter comes out and reveals his true form. She calls him Theodore, and he uses the doll to drain her of her powers. Hey says, “This time I came prepared.”

Freya and Dash’s mother have an awkward dinner alone because both Killian and Dash left.

Joanna is helpless on the floor. Theodore says he’s waited a long time for this. Theodore is the man who burned her daughters at the stake all those years ago — the scene we witnessed in the flashback. Theodore gabs a hot fork from the fire place and burns her ear.

Joanna’s lawyer comes to and, when Theodore is about to kill Joanna, he finds the power-draining doll and throws it in the fireplace. With her powers restored, Joanna gets up and pushes Theodore to the ground. She jabs the fireplace fork into his stomach. He begs to be spared and, in the process, says that he’s not the Shifter that framed her for murder. More will come.

Wendy sneaks into the hospital to see the woman who’s blaming Joanna for the murder. Wendy, with the butterfly she stole from the entomologist, whispers a spell. The dead butterfly comes to life and flies into the woman’s ear. She wakes up but Wendy is gone.

As Ingrid continues to worry about her sick friend, Barb, Adam arrives at the hospital. They kiss passionately. Ingrid receives a phone call saying that Barb and her baby are okay. But just as she thinks all is well, Adam collapses with a bleeding nose. Paramedics rush to his aid, but it doesn’t look good.