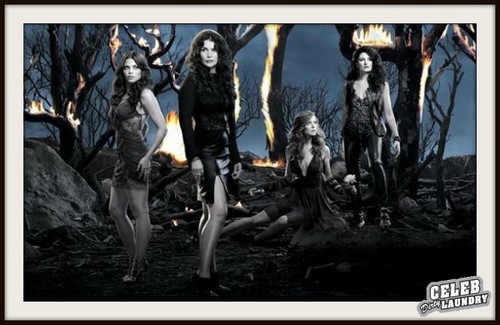 Tonight on Lifetime, WITCHES OF EAST END premieres with its pilot episode. Inspired by Melissa de la Cruz’s New York Times best-selling novel, Witches of East End, the show centers around the mysterious Beauchamp family: free-spirited artist Joanna and her two grown daughters — wild-child bartender Freya and shy librarian Ingrid, both of whom are unaware that they are gifted (and cursed) with a magical birthright.

Freya is recently engaged to the man of her dreams, wealthy playboy Dash Gardiner, but when she finds herself inexplicably drawn to Dash’s troubled, enigmatic brother Killian, bizarre occurrences begin to manifest in her life. Meanwhile, Joanna’s long-estranged sister Wendy shows up with a warning that could change the Beauchamps’ fate forever, forcing Joanna to reveal to her daughters they are, indeed, immortal witches who possess great untapped powers. With their idyllic small town life now turned upside down, and a formidable and ancient enemy intent on ending the Beauchamp family line, will Freya and Ingrid be able to accept their true potential before it is too late?

Tonight’s series premiere is going to be great and you won’t want to miss it. So be sure to tune in for our live coverage of Lifetime’s Witches of East End Season Premiere tonight at 10PM EST! Remember also to bookmark Celeb Dirty Laundry and check back here for our live Drop Dead Diva recaps, reviews, news, and spoilers!

The show opens up with a view of a mansion. People are having a party. We see a gate that says “No Trespassing.” In a backyard, we see a woman drawing a symbol in the sand. Two passersby notice the woman and ask, “Is that Joanna?” The woman stops drawing the symbol in the sand, looks at them with foggy eyes, and walks away. The two begin walking away, but then they turn around to see the same woman. Surprise. Her face turns demonic.

Next, we’re introduced to two young ladies: Freya and Ingrid Beuchamp. The girl in the red dress (Freya) is nervous because it’s her engagement party tonight; she says she had a weird dream the other night about a man — despite her current “togetherness” with her fiance, Dash. Her mother, Joanna Beuchamp, comes to the door and can’t believe her baby’s actually engaged to marry.

At the engagement party, Dash and Freya talk. Dash’s mom comes out and steals Freya away. She says that she hopes she and Freya become close. She says that she understands she was raised with a particular WAY — you know, not having learned proper etiquette, etc. The mom eats an appetizer and Freya wishes for her to choke; she does. She runs over to Ingrid to tell her she has powers — but Ingrid, of course, doesn’t believe her and they joke around about it. Meanwhile, Freya sees that handsome man from her dream enter the party. Freya’s convinced this MUST mean something; however, Ingrid is still unconvinced and chalks the whole thing up to mere coincidence, a trick of the mind.

Dash and Joanna chat in front of a portrait. Dash says that this man built the mansion, and Joanna accidentally slips and says, “He was a real son-of-a-bitch — OR SO I’VE READ.” [But we know that Joanna is like super duper immortal and like a super duper witch; therefore, she probably met him.]

Joanna says that her daughter wasn’t raised with so much rules and, if told to do one thing, will do exactly the opposite. We learn that Freya and Dash have only known each other for a few months.

Ingrid runs into a fellow that she clearly has a thing for. We learn at this moment that Ingrid did a dissertation on witchcraft and historical occult practices in post-colonial New York towns. The man’s name is Detective Noble. Of course the soon-to-be witch is going to fall in love with figurehead meant to uphold Mortal Laws #Ugh. He’s recently broken up with his girlfriend, Emma, and he soon receives a call summoning him to the crime scene of the murder we witnessed in the opening scenes.

Dash and Freya chat. Dash tells Freya that she seems “off.” The man from Freya’s dream walks up to Freya and Dash. Dash knows the man; it’s his brother. She quickly leaves. Dash’s brother, Killian, enters the house and walks up the stairs. Freya follows him, and they enter the bathroom.

Freya says: “I know how this is going to sound, but I had a dream about this.” Killian says, “I think I had the same.” Freya asks what happened in his, and then they go at each others faces. KISSES! The nearby rose bouquet catches fire.

Meanwhile, Ingrid finds a photograph with two woman, one of whom strangely resembles her (and possibly her mother).

Freya says that she can’t do this with Killian. She runs out of the bathroom, down the hallway. As she does, the bouquets of roses explode, a flurry of petals now drifting between the old mansion walls.

It’s daytime and there’s a lady driving. A black cat runs into the middle of the road and the lady hits the cat. The lady gasps. When she gets out, there’s a woman in the place of the cat.

In the kitchen, Freya and Ingrid and Joanna talk about the engagement. Joanna is concerned that she’s rushing into this thing with Dash.

Freya runs over to see Dash; she’s feeling guilty after that kiss with Dash’s brother.

Joanna leaves the house; her neighbor sees her leave. But as the real Joanna drives away, a fake Joanna walks into the house. She grabs a candle and begins an incantation in front of a painting; there’s a man trapped in the painting and, as she chants, the man moves. He wants out.

The woman who was the cat-then-woman unzips her body bag and walks out of the hospital. When Joanna gets home, the woman is waiting for her on the porch. Her name is Wendy, and she’s Joanna’s sister. Joanna asks her what she’s doing here, and Wendy says, “That’s no way for you to greet your sister you haven’t seen in over a hundred years.”

Wendy says that she came here to save Joanna’s life.

Detective Noble comes to visit Ingrid at the library, where she works. He asks Ingrid about the weird symbol that was drawn in the gravel. She says she doesn’t quite know what it is but that she’s be happy to research it.

Wendy says that she can’t believe she died earlier today in “such a stupid way.” Joanna asks her how many lives she has left, but Wendy shrugs it off. She only has nine lives (as does the black cat, her alternative form). Wendy says, “Who keeps count? You deal with your curses and I’ll deal with mine.”

There’s clearly some sisterly drama between them. Joanna just wants to know why she’s in danger; Wendy says she will tell her, but that they’ll need help from the girls. But Joanna says NO, as the girls don’t know what they are . . . . Not this time around. We then learn that Joanna’s curse involves her having to watch her two girls grow up with magic — only to have that magic destroy them. And once they die, then she’s forced to give birth to them all over again. An endless cycle. She says she didn’t tell her daughters they were witches this time around because she was hoping she might be able to change their fates.

Joanna says she trying to give them what they’ve never had: a chance at a so-called normal immortal life.

Meanwhile, Freya, a bartender, is trying to blow up a jar of olives with her mind. Killian enters the bar, and he wants a drink. He says that he’s staying at his boat down in Fairhaven. He’s trying to make a move on her. She says nothing happened between them; the kiss was just a momentary lapse in judgement.

Ingrid tries to help a co-worker of hers get pregnant, so they try a fertility spell. They bind hands. They seem to think the spell didn’t work, but as they leave the pentagram glows bright.

Wendy and Joanna read their cards. They realize things in this life are about to change: that Ingrid and Freya’s powers are about to come into light, and that someone in this town possesses powers that rival Joanna’s. Wendy wonders how Joanna is certain Dash is mortal; but Joanna tested him when Freya and him first met. He appears to be fully mortal.

Freya and Killian run towards each other on the dock. Freya jumps into his arms and they kiss passionately. They stop. Freya asks him why he looks so sad . . . . “Because I’ve waited four hundred years for this, and it’s not even really happening.” Freya wakes up from the dream.

Joanna tries to keep Wendy following her rules: No magic in the house. Joanna wants to keep everything under wraps, and maybe she can fix the “someone wants to kill us” problem herself.

Meanwhile, back at Joanna’s house, Demon Joanna finishes the incantation to pull the Man in the Painting into the real world. She says, “If you come with me, I can help you get revenge on the witch who did this to you.”

In the bar, Freya and Killian strike up another conversation. Killian wants to get together, to talk, and he promises to be a gentleman. The guy from the painting is watching her.

At the library, Ingrid’s friend runs in and says she’s pregnant. Ingrid’s friend goes off on this ridiculous meta-speech about how “If this were a movie, OMG, this would be the moment where the unknowing girl realizes she was magical all along.” Spoiler: she is magical.

The guy from the painting runs into the bathroom, where a drunk Freya is trying to get the desirous thoughts of Killian out of her head. The Guy from the Painting says that he wants revenge. The man says that he asked her to marry him, but Freya said no, he got mad, and then she trapped him in a painting. He forces her to do a spell that forces them both inside a painting.

Killian runs into the bathroom, but he’s oblivious.

Meanwhile, Wendy, who was making Vision Stew, is stabbed by Demon Joanna. The real Joanna returns home only to find her sister bleeding on the floor. Joanna says she can fix this, but Wendy says no, that she must go save Freya. She had a vision telling her what’s going down.

The wife who was almost killed at the beginning of the episode comes to, and she says she knows who killed her husband (Joanna, or at least someone who looks like her).

Ingrid returns home and Joanna tells her that her and her sister are in fact witches. The doorbell rings. It’s Detective Noble. He takes Joanna away, as she was positively identified as the murderer; Joanna tells Ingrid that she’s the only one who can save Freya and all the answers she needs rest in a false cabinet behind a dishware hutch.

What did you think of this show? Will you be tuning in next week? I’m a sucker for anything witchy-magical, so you can be I’ll be back!