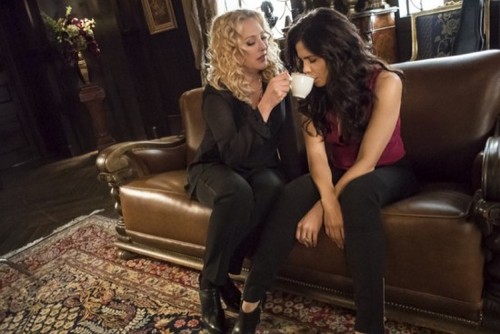 Tonight on Lifetime, WITCHES OF EAST END continues with another new episode.  On tonight’s show, called “Snake Eyes,”  Ingrid suspects Mike’s ulterior motives.  Did you watch last week’s premiere episode?  We did and we recapped it right here for you.

On last week’s episode, the shifter summoned a familiar face. Ingrid discovered something startling from her past. A novelist came to East End to research his new book. Wendy turned over a new leaf and attempted to get serious with Leo (Freddie Prinze, Jr.).

On tonight’s show, Wendy and Joanna come to blows over a secret Joanna has been keeping for over a hundred years. The shifter threatens Freya. Ingrid suspects Mike’s ulterior motives.

The show opens at The Bent Elbow, the bar Freya’s working at. Freya talks with Ingrid about her man problem — her love triangle and how she’s fairly certain that Killian is her “destroyer.”

Meanwhile, Dash’s mom is cooking up some dangerous magic of her own. She enchants some roses and addresses them to Freya.

At home, Joanna admits that she must show Wendy something. Joanna shows Wendy that she has the serpent key. Wendy is extremely angry that Joanna lied. Wendy wonders why on earth Joanna kept it all these years. Joanna admits that it’s the only thing they have left of their home — and their only way back should they want to return in the future.

Killian enters the bar and he attempts to strike up conversation with Freya, but it doesn’t go so well. They get into a fight. Amy, Killian’s sort-of girlfriend, shows up to surprise him and she realizes that he’s in love with Freya.

At the house, Wendy urges Joanna to get rid of the serpent key, but Joanna is adamant that they’re not going to get rid of it. Joanna storms out. Wendy looks at the key. It comes to life, bites her wrist, and wraps around her arm.

Wendy screams and Joanna comes in furious. She goes to get her spellbook to see if they can find a spell to get the key off her wrist.

At the library, the man who’s writing a novel on about East End is curious about the occult — he’s pursuing the history of witchcraft in the town.

At the bar, Freya receives her cursed roses. She thinks they’re from Dash, but they’re actually from his crazy mother, Penelope (AKA Athena).

Penelope arrives at the bar and notices that Freya looks very ill (her doing) and tells her that she must come home with her immediately. She says that she’ll take great care of her.

At home, Joanna finds a spell that might be able to get the key off Wendy’s wrist, but when she finally finds Wendy, well, Wendy has new ideas. She says that maybe they can use it to go home. But Joanna, while she’d love to return home to the other realm, admits that they can never do so. She reveals that their father banished them to this world when he came into power and that it’s never be safe for them to return to Asgard.

Wendy searches the house for Joanna, who’s disappeared. Joanna finally attacks Wendy, trying to save her the serpent’s deadly hold. Wendy asks Joanna what it feels like to have abandoned her only son. Joanna admits that there’s not a day that goes by that she doesn’t think of him or what they’ve lost.

At Penelope’s house, Freya falls asleep and she begins working some kind of spell.

At the library, Ingrid chats with the charming new writer, and he reveals that he thinks witches are real. Oh, snap!

Joanna walks through the house looking for Wendy, who’s still dead-set on getting to the portal. Wendy says awful things to Joanna and, in her commentary, we come to know that Freya and Ingrid’s father is in this world, too.

In the library, the writer tries to convince Ingrid that witches are real, and he thinks witches came from a magical land called Asgard a longtime ago. He seems to think that the door to Asgard is in East End.

Wendy and Joanna continue to fight; Wendy says that if she wants the thing off she’ll have to destroy it.

Penelope finishes her spell but Dash walks in. When Dash gets in, Penelope freaks out, asking Dash to help Freya. Of course, this is all an act.

Freya is back to normal. Dash reveals that he didn’t go to his medical conference because he couldn’t stand the thought of being away from Freya after what they’d gone through. They seem to make up.

Wendy has trapped Joanna, but Joanna destroys the key before Wendy can do anything more. Joanna, in destroying the key, has also destroyed any chance she has of ever getting back to her home and seeing her son, Frederick.

Freya says she’s going to start a fire, but when she goes to use her magic, nothing happens. It seems as if Penelope’s spell may have stolen her magical essence.

Joanna sits in front of a fire. Wendy comes to sit beside her. They’re both crying. Wendy says she understands if she hates her, but Joanna, of course, doesn’t. Joanna finally comes to the realization that there’s no getting back to her son.

Ingrid comes in and asks if there’s a real place called Asgard. Freya comes home, too, and she tells everyone that her powers are gone. At the end of the episode, we see Penelope conjure a storm with Freya’s powers.