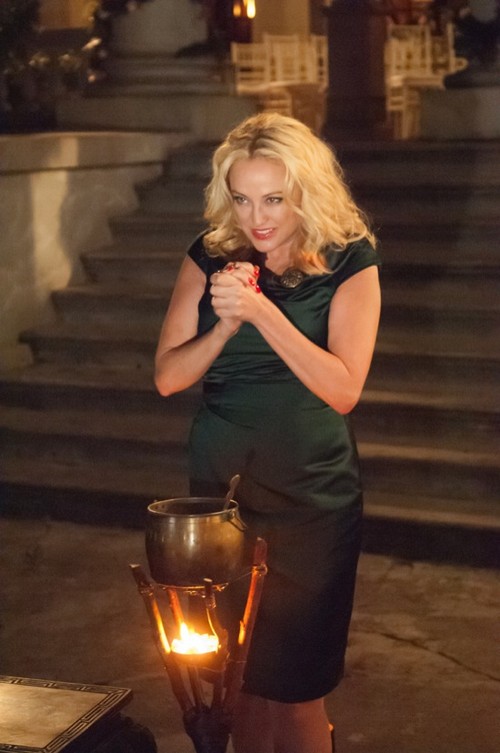 Tonight on Lifetime, WITCHES OF EAST END continues with another new episode.  On tonight’s show, called “Oh, What a World!,”  Mike takes dangerous measures to complete his plan. On the previous episode, a mysterious professor with old connections to the Beauchamps tried to help Freya regain her powers. Killian made a decision about his future in East End. Mike revealed an interesting theory to Ingrid. Amidst wedding preparations, Dash tries to solve the mystery of the catacombs.

On tonight’s finale, Freya’s wedding day arrives, both Killian and Dash give Freya wedding gifts, and Joanna and Wendy discover the identity of the shifter.

The show begins where the last episode left off: Killian and Freya talk on her doorstep. He says that Dash will destroy her if she marries him. She says that she’s made her choice and runs into the house. Killian chases after her but leaves as soon as he sees Victor.

Meanwhile, Wendy invades the catacombs of Fair Haven. Mike and Ingrid talk about how she’s the second key to Asgard.

Wendy returns home and says that it’s worse than they thought. There’s deadly poison leaking from a rift between both worlds. Joanna is glad that she has her sister and husband to help her figure things out.

We see Penelope unleash a dark spell, one that takes the shape of ravens. They take to the air.

There’s a touching montage showing Killian on his boat, Freya in her wedding dress, Dash preparing, and Joanna waking up beside Victor. Joanna sees Freya in her dress. When Joanna hugs Freya, her veil rips. Wendy grows worried after a storm starts. A raven hits the window. So far, 3 harbingers of doom. Wendy says that they must cancel the wedding, but Joanna will not do that to Freya, who, in all her lives, has never gotten to see her wedding day.

Ingrid breaks into Mike’s hotel room. The wall is plastered with papers obsessed with locating Asgard. She begins taking things and, before she can leave, Mike shows up.

Victor walks into the kitchen and says that he’ll be leaving/returning to the city, but Freya doesn’t want him to leave. She wants him to walk her down the aisle. Freya  tells her father about her Tarot reading. She says that he met The Trickster last night. “Are you sure about that?” Victor says, who doesn’t seem so convinced that Dash IS NOT The Destroyer.

Freya tells Joanna that she asked her father to walk her down the aisle. Joanna is not mad, and she says that she wants her to listen to her own heart and do what feels right. A gift arrives for Freya. It’s a music box from Killian. It plays a song that gets Freya all emotional.

As Joanna and Wendy prepare a blessing spell with sage, Wendy wonders where Victor and Joanna’s relationship currently stands. Joanna says there will never be a “Victor and me,” but Wendy says, “There’s always been a Victor and you. Do you love him?” Joanna says that loving him has never been a problem and that she can’t go down that road again.

Dash tricks Freya into visiting him. He gives her a fabulous piece of jewelry and says that she deserves the best of everything and that he’s so glad she’s his.

Victor returns. Ingrid asks Victor about Asgard and why they were forced to leave. He tells her there was a war and that to open that door would be catastrophic — there are people that want them dead.

There’s another fun montage of Freya getting dressed. She shows everyone her new incredible sapphire bracelet. She says she doesn’t care about all the extravagance; she just wants to start a life with the man she loves. The four of them do a blessing; just as they finish, Freya’s bracelet falls off her wrist. Penelope enters. She says that her father is waiting for her in the music room. Wendy is distraught that Freya’s bracelet broke — another bad omen.

When Freya finds Victor, he says that they’d met before in her past life. He tells her about her Happy Time, when she’d finally found her other half. His name was Henry. In the flashback, Henry looks like Killian. Victor tells Freya that Killian is Henry and insinuates that maybe, just maybe, she’s decided to marry the wrong man.

Meanwhile, Joanna finds Wendy and tells her that she thinks the Shifter is Penelope. She tells Wendy about the weird conversation she and Penelope had about Archibald Browning (her father). Joanna felt a flash of anger, of pain, and Penelope insinuates that Archibald was murdered. Wendy suggests that they down to the portal to make sure nothing’s happened. Joanna agrees. When they get down there, Joanna is going on about how she should’ve listened to her. Joann says, “Something’s wrong, very wrong.” Wendy says, “You’re right,” turns into Penelope, and zaps Joanna unconscious.

Penelope has Joanna captive and spellbound, unable to use her powers. Penelope reveals her true identity: Athena, the daughter of Archibald Browning.

Victor tells Freya that it’s her task to decide which man to marry.

Joanna tries to tell Penelope that her father was evil, that she was just a child who didn’t understand what he was capable of. Penelope says that he was murdered. She also reveals that Dash is truly in love with Freya and knows nothing of their lineage. Penelope says that she stole both Killian and Dash’s powers when they were just babies so she would have enough power to locate Joanna and her family.

Freya finds Dash and she tells him that she can’t marry him. He gets angry and tells her to get out. He tells her that he doesn’t ever want to see her again. He breaks a lamp.

Wendy is looking for Joanna and she seeks out Victor for help in locating her. Mike shows up at the wedding and takes Ingrid hostage with a gun. He drags her down to the portal.

Meanwhile, in the catacombs, Penelope prepares to fabricate Joanna’s suicide. She prepares a noose. Now that the deadly, Asgardian poison is coursing through her veins, Joanna is weakened and can be killed like a normal person.

Wendy finds Joanna. Penelope and Wendy start strangling each other.

Mike is adamant that Ingrid open the door. He shoots her in the shoulder to encourage her. She touches the portal and the wall begins to shake.

Wendy breaks Joanna from the spelled circle. Joanna finds her way out of the bindings and kills Penelope. Freya’s powers return — but so do Dash’s and Killian’s — in wake of her death.

Dash finds Killian about to leave and, when he tries to attack him, he assaults him with his magic. Killian appears to be dead. Unsure what to do, Dash unties the boat and sends it into the sea.

Freya shows up, too late, and sees his boat gone.

Meanwhile, Ingrid is opening the door to Asgard. Wendy and Joanna show up, but they’re too late. The gate has been opened. The blinding, powerful energy destroys Mike — who looks on in amazement. Wendy, Joanna, and Ingrid look at the portal. A human walks out, but we don’t see his or her identity before the episode ends.