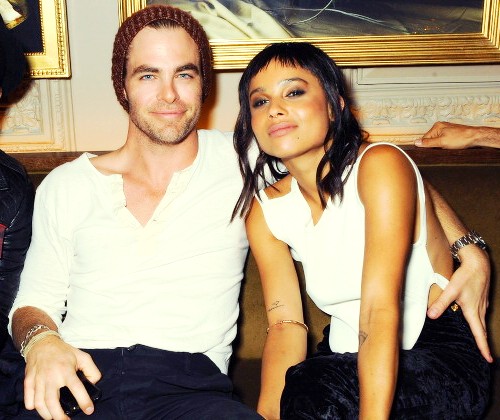 Man, Zoe Kravitz really does get all the hot men, doesn’t she? First Michael Fassbender, then Penn Badgley, and now Chris Pine? You go, girl.

According to a new report from Star Magazine, Chris Pine and Zoe Kravitz ‘showed off their love‘ while at London Fashion week, although Zoe’s friends are apparently worried about Chris breaking her heart. Star’s source claims, “Chris is a selfish and egotistical guy. Her friends begged her to think twice about him, but she’s smitten.”

Although she and Chris ‘barely’ know each other, she’s already smitten. Sure. Anyway, the source also adds, “She acts like she can’t get hurt… but Chris has a way of getting women hooked on him.”

Dammit Star, I actually wanted to believe this story. And this is one of their more realistic ones, too. Despite the sources sounding like fan fiction, as per usual, it actually makes sense. Chris was with a model for a very long time, but during the Star Trek Into Darkness promotion, he told everyone he was single. We also know that Zoe is single, after having broken up with Penn many months ago.

So are Chris and Zoe dating or hooking up? They’re both hot and they’re both young, and they’re both in London. The fact that they were actually both in London for Fashion week has been confirmed, so they were both there for sure. But there are no pictures with them together, so take that for what you will. Maybe they didn’t want to pose together, maybe they’re trying to keep this secret, maybe this is all made up and this isn’t true at all.

What do you guys think? Could there be something going on  between Chris and Zoe, or is Star barking up the wrong tree again? Let us know your thoughts in the comments.