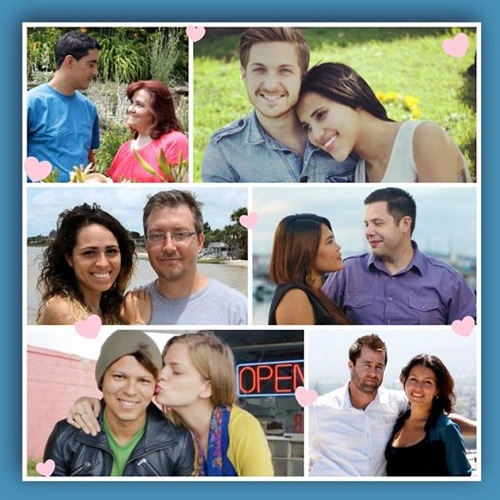 Tonight on TLC 90 Day Fiancé premieres with an all new Sunday October 19, season 2 premiere episode called, “New Couples, New Journeys.” On tonight’s episode three couples from season 1 discuss the status of their relationships 10 months after getting married and how the series affected their lives.

For those of you unfamiliar with the show; Americans meet potential mates from other countries and have 90 days to decide if they want to get married before their visas expire.

On tonight’s episode, using a unique 90 Day Fiancé visa, six foreigners will travel to the US to live with their overseas fiancés for the first time. Each couple will have just 90 days to decide to get married or send their international mate home.

Six foreigners are entering the United States on a fiancée visa and if they don’t get married within the next 90 days – they have to leave the country. Either by choice or force!

On tonight’s episode of 90 Day Fiancé, we at first meet Justin. He is a teacher from sunny California and for the last couple of years he’s been casually dating. But then all of that changed when he attended the World games down in Columbia. According to him, that’s where he met the woman of his dreams, Evelyn, and over the course of seven days while he was on vacation the two of them seemingly fell in love.

And though he eventually returned home – he never forgot about her. So they continued to date albeit long distance for about 3 months until one day he surprised her by proposing marriage. Justin had proposed and now that his bride to be has been accepted on a 90 day visa – he finally has to tell his family about what’s been going on.

He never mentioned his girlfriend to anyone other than his closet friends. So now that his taking his relationship to the next level – he’s worried his family is going to criticize him and this impending marriage. And he definitely doesn’t want to have to deal that!

Danielle on the hand has a different situation. Not only is she older but she also has three teenage daughters. Mohamed, who is younger than her 41 by 15 years, is from Tunisa. Hence her fiancée is in for a cultural shock when he finally makes it to the states.

He’s admitted that he hasn’t been around kids all that much so on top of automatically becoming a stepfather to three young women – he has to adapt to life in the States. And some of the freedoms so many Americans take for granted can often go to people’s heads. Just look at foreign exchange students. Not all of them are success stories!

Then there’s Brett. He’s a father as well but he shares custody of his six years old daughter with his ex. So his fiancée Daya doesn’t have to worry about stepping into a maternal role right away. Daya is from the Philippines and the two of them started a relationship online before they met in person. So Brett is a little bit nervous his future wife will get homesick seeing as she’s never left her country.

And that’s a natural concern for many of these American Fiancées have. Yamir and Chelsea met in his home country of Nicaragua. In that country, Yamir is a star. It’s like he’s their version of Justin Bieber back when people used to like him.

Hence Yamir would be giving all of that up, the fame and the stage, if he decides to stay in the States with Chelsea. So to be with her – he’ll have to make sacrifices. And one of them includes being in a country where English isn’t he’s strong suit.

Yamir’s manager voiced some of his concerns. He told the couple that it wasn’t fair for Yamir to move out to a rural Midwestern town. The least Chelsea could so is move to a place like Miami or LA so that Yamir wouldn’t feel completely cut off from his Latin culture. However, once Chelsea got Yamir to agree to going back home with her – she didn’t want to listen to anyone else’s suggestions. She simply wanted to go home and have him with her.
When Justin met his fiancée again, he was able to charm his girl with a limo ride from the airport and a bedroom filled up with balloons. But then everyday life started to set in and the bloom fell off the rose. Evelyn learned her fiancée wanted her to be the one cleaning up and so her first days didn’t turn out to be the grand romance she was expecting.

Brett and his roommate Lou worked overtime to make sure the whole house was arranged perfectly for Daya. He knows how particular she can be and he didn’t want to disappoint her. So he cleaned the house from top to bottom. Though Brett still had to work on some of his friends. They worried he’s being used for a visa and because he doesn’t want to hear that – he refuses to listen.

But honestly, if Daya is really that concerned about things being perfect (and she is) – the first thing that’s going to get to her is the roommate. No woman wants to share a place with an outsider!

As for Danielle, her fiancé was supposed to have arrived already and yet he’s MIA. He’s not answering his cell phone and the last time they talked – he said he was at JFK. So Danielle and her daughters are starting to question whether or not he used her to land in the US but also that he never planned on marrying her.

Danielle ended up going to the airport searching for her man and luckily she was able to find him there. She had spent a lot of money on getting him to the states so if he hadn’t showed – it would have been a blow to her pride.