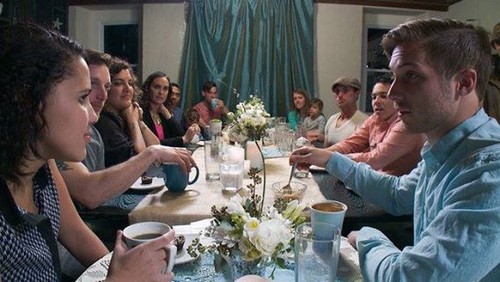 On the last episode, Amy confronted Danny about his overbearing family. Mohamed learned the meaning of “hooking up”. Jason traveled to Brazil, still uncertain if Cassia would meet him. Yamir arrived in the U.S. and Chelsea’s parents had many questions about the couple’s future. Did you watch the last episode? If you missed it, we have a full and detailed recap right here for you.

On tonight’s episode as per TLC’s synopsis, “Cassia argues with Jason about trust issues; Danny’s date night with Amy is ruined by his brother; Danielle’s family doubts that Mohamed will stick around; Justin finally sees his family after revealing his secret; Yamir’s move comes with shocking news.”

Danielle tells Mohamed she wants the wedding to be small and everyone else will be able to attend the reception. They discuss the budget for the wedding: $500 for the dress, and $400-500 for the food. Danielle’s sister is in a similar difficult financial situation and is worried.

Justin is mad about his parents’ hesitant reaction to him and Evelin getting married, so he sets up a meeting between them and his mother.
His mom says everyone was shocked because his family wasn’t involved in the engagement or planning process of all of this, and Justin says he kept it from them because they try to insert themselves and control him somewhat.

Evelin says Justin needs to spend more time with his brothers because family is everything. His mom starts crying and says the most important thing to her is the relationship between her kids. Justin says he’s going to go talk to Jake because of how important this is to her.

Amy is living at Danny’s brother’s house because of the couple’s vow of abstinence, and Danny laments the lack of alone time so he takes Amy out on a date to the skating rink. Then, they go back to the house and watch a movie on the couch. Nick comes in to troll them, sitting right between them and chatting to keep them from breaking their vow. “Nick crashing my private moment is not cool,” Danny says.

Chelsea and Yamir go shopping and they disagree over what kind of rings to get. Chelsea wants a vintage ring, but Yamir wants a new one. “It’s a new history, you and me,” Yamir says. “It’s new. Understand.”  Chelsea finds a vintage ring that she loves, and Yamir gets a new ring.

Danielle meets with her sister and friends and they talk about the wedding. Sarah asks how long it will be until Mohamed can work, and Danielle says she will have to pay for his papers so he can work, which makes them skeptical.

Danielle says she knows Mohamed loves her, but she is worried he will leave if he finds out the full financial situation she is in, as she wasn’t forthcoming about it to begin with.

Sarah brings up the age and culture differences as well, saying that all signs point to this relationship being an impending disaster.  Sarah says Danielle is making a “monumental mistake.”

Justin is reaching out to his brother Jake to talk to him about Evelin more. They haven’t talked since the pool party. Jake says he was upset because the bomb was just dropped on him after no contact from Justin.

Jake asks if Justin is worried because this woman is coming here with no job, and he says yes, but every marriage is difficult.  Justin says he thinks Evelin will make him a better man.  He invites Jake and his wife to dinner to get to know Evelin better.

Jason works on his Internet business a lot, and Cassia doesn’t think the amount he works is good for him or the relationship. She says if they want to get married and spend their life together, they need to spend more time together.
Because the house remains disgusting, she cleans while Jason is out.

Among some magazines, she finds a nude magazine. She told him he couldn’t have any in the house, but he kept this one, so now she’s pissed.  She says she doesn’t know him or trust him 100%.   She goes around the house searching for the rest of the skin mags.

Yamir has been focusing on the wedding and getting used to America for the last few weeks, but he has been thinking about the way things went down with his music group, Myla Vox, and manager. He finds out a friend, Ernesto, substituted for him in a concert for the group. He contacts his friend online to find out what’s going on and if he’s in the group anymore or not.  “If I not in the group anymore, I feel very devastated,” he says.

Danny tells Amy, in very euphemistic terms, that his dad is racist. Amy is from South Africa, where there has been a long history of segregation, and is nervous to meet him. “I really don’t know how I would handle it if Danny’s dad has an issue with me marrying Danny,” saying she’ll be hurt if he doesn’t accept her.

Cassia confronts Jason on the magazines. He yells at her not to bend the magazine, and takes her to see his whole collection. He says they will be selling the magazines once they’re organized.

Mohamed has just found out about some past due bills after their cell phones get shut off. Danielle is afraid he’s going to go back to Tunisia, and explains to him that she was scared he wouldn’t want her if she told the truth. He says she made him lose everything in his life to come here, and she asks if he thinks they’ll be able to work everything out before his visa expires.

He says of course he’ll leave if she keeps being dishonest, and that she’ll lose his trust. He says he won’t leave because of the problems or because they don’t have money, only if she keeps doing things on her own secretly.

He says she is the only one who can decide if he will stay or go back to Tunisia.

Yamir has gotten back a message from his friend. The message is harsh, saying he made a decision to alter the group based on his personal interests and that the group is over because of him. He also tells Yamir not to ask him for anything ever again. Yamir is devastated.

He tells Chelsea, and she feels bad that his group was destroyed because he came to be with her.